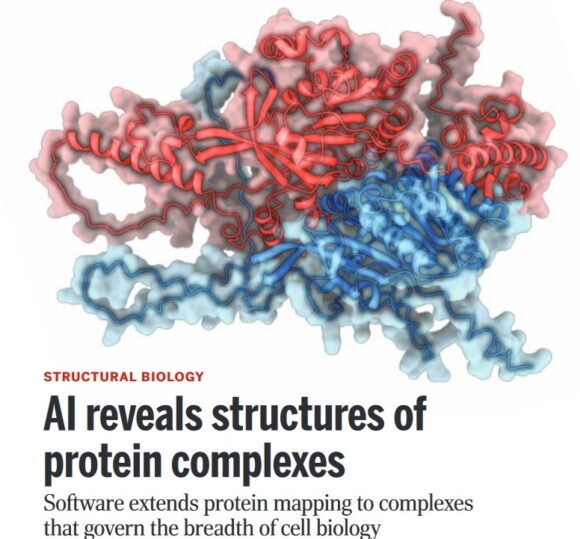 Two artificial intelligence programs DeepMind and RoseTTAFold are taking the prediction of protein structures to new heights.   One year ago, software programs first succeeded in modeling  the 3D shapes of individual proteins as accurately as decades-old experimental techniques can determine them. This summer, researchers used those AI programs to assemble a near-complete catalog of human protein structures. Now, researchers have upped the ante once again, unveiling a combination of programs that can determine which proteins are likely to interact with one another and what the resulting complexes of the cell look like.

Here  an excerpt from an article on this development that was published in  Science  this morning.

“It’s a really cool result,” says Michael Snyder, a systems biologist at Stanford Uni-
versity. “Everything in biology works in complexes. So, knowing who works with who is
critical.” Those relationships were hard to reach with previous techniques. The new
ability to predict them, he says, should yield an array of insights into cell biology and pos-
sibly reveal new targets for the next generation of therapeutic drugs.

Computer modeling experts have worked for decades to speed things up. Their recent
success has depended on deep learning algorithms, which use databases of experi-
mentally solved protein structures to train
software programs how to predict structures for proteins based on their amino
acid sequences.

Last year, two groups, one from a U.K. company called DeepMind and the other led
by David Baker at the University of Washington, Seattle, created rival AI programs
that both now churn out predicted protein structures by the thousands (Science, 30 July,
p. 478). The software also produced structures for a handful of known protein com-
plexes, mostly in bacteria ( Science, 16 July, p. 262). But in eukaryotes—organisms from
yeast to people—the interacting partners are often unknown. Identifying them and pre-
dicting how they come together in a complex was too high a bar for the original programs.
Now, both research groups have tweaked their programs so they can solve structures
of protein complexes by the hundreds. Online this week in Science, Baker and his col-
leagues use a combination of AI techniques to solve the structures of 712 complexes
in eukaryotes.

To find proteins that may form complexes together, the team began by comparing the
amino acid sequence of all 6000 yeast proteins to those from 2026 other fungi and
4325 other eukaryotes. The comparisons allowed the researchers to track how those
proteins changed over the course of evolution and identify sequences that appeared
to change in tandem in different proteins. The researchers reasoned that those pro-
teins might form complexes, and that they changed in step to maintain their interac-
tions. Then the team used its AI program, called RoseTTAFold, along with DeepMind’s
AlphaFold, which is publicly available, to attempt to solve the 3D structures of each set
of candidates. Out of 8.3 million identified coevolving yeast protein pairs, the AI pro-
grams identified 1506 proteins that were likely to interact and successfully mapped
the 3D structures of 712, or about half.

“These interactions span all processes of eukaryotic cells,” says team member Qian
Cong, a biomedical informatics expert at the University of Texas Southwestern Medi-
cal Center. Among the highlights, Cong and Baker say, are structures for protein com-
plexes that allow cells to repair damage to their DNA, translate RNA into proteins in
ribosomes, pull chromosomes apart during cell reproduction, and ferry molecules
through the cell membrane.

“It’s a great example of the promise” of 3D structures, says DeepMind’s John Jumper,
one of AlphaFold’s lead developers. By revealing precisely how proteins interact
with one another, the models should help biologists visualize how previously unknown
complexes carry out a multitude of jobs within the cell.

“These models give hypotheses for experimentalists to test,” Cong says. And because
disrupting these interactions could offer new ways to intervene in a wide variety of
diseases, she adds, “it also gives you a lot of potential new drug targets.”

More are likely on the way. Last month, Jumper and his colleagues posted a pre-
print on the bioRxiv server describing a new version of their AI, dubbed AlphaFold-
Multimer, which mapped structures of 4433 protein complexes. Analyses within the AI
program that gauge the confidence level of each fold suggest the structures were accu-
rate up to 69% of the time.

Indeed it is an exciting time for structural biology as well as for the positive application of AI.