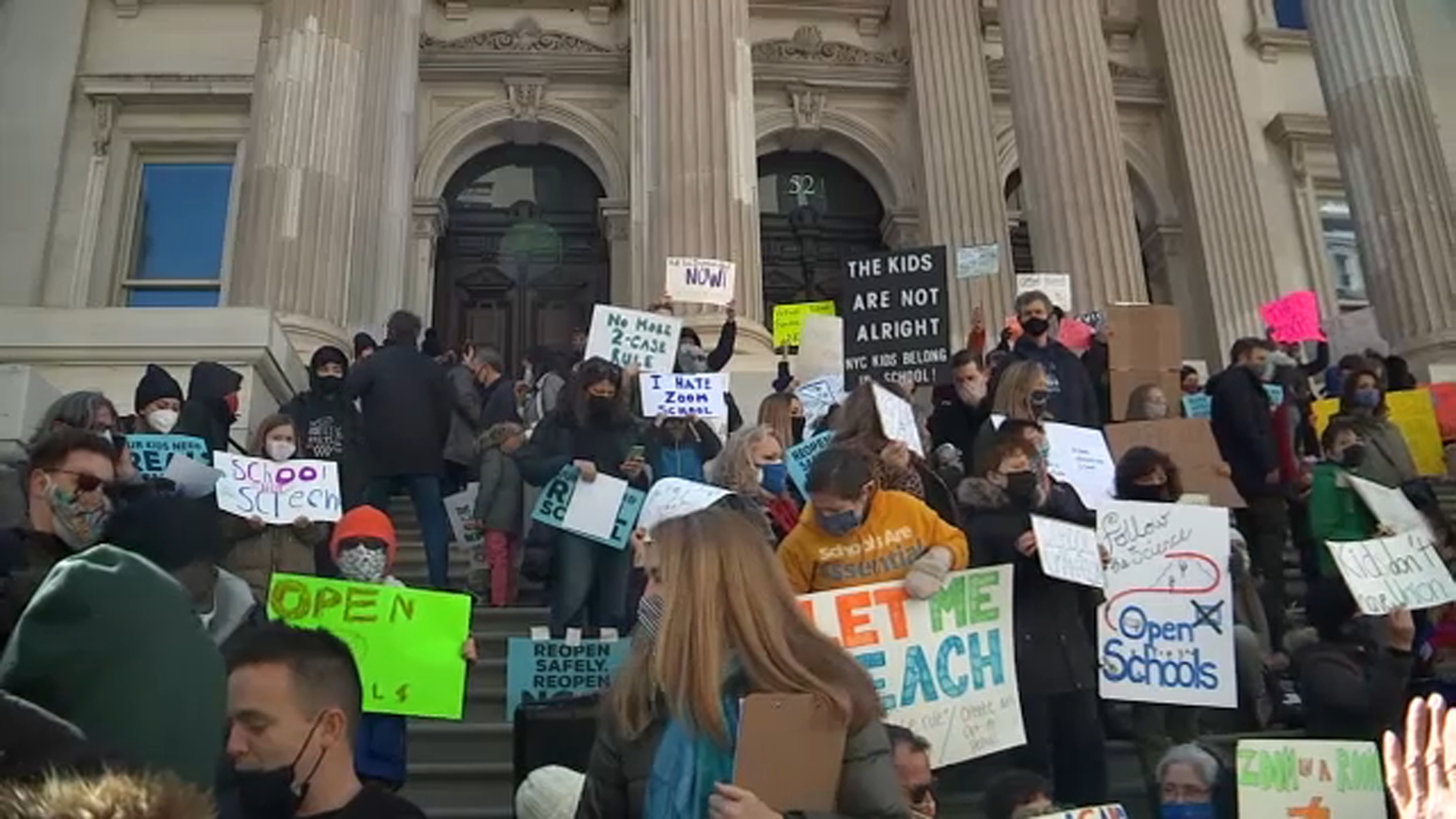 My colleague, David Bloomfield alerted me to this article that appeared in Chalkbeat yesterday that comments on what to look for in the coming months in the New York City public schools. Perhaps the most provocative are comments on the possibilities as to who will be appointed schools chancellor.  David is quoted in the following:

“Many political insiders believe that the next mayor  (likely Eric Adams) will tap David Banks to lead the nation’s largest school system. The founding principal of the Eagle Academy for Young Men — the first school in a network of all-boys public schools in New York City — is a trusted advisor of Adams, and was standing with him on the night the Brooklyn borough president won the Democratic primary.

(Banks is one of Porter’s mentors. He was the founding principal of the Urban Assembly school in the Bronx where Porter taught and eventually served as principal.)

“Banks is the favorite, but Ellis, Treyger, and Porter are still worthy of mention, as would breaking tradition by putting all four before the public — or just a single nominee — for public questioning by the City Council or Panel for Education Policy prior to appointment,” said Bloomfield, a proponent of a public search process for chancellor.”

The entire article is below!

It’s back to school for NYC. Here are 6 issues to watch this year.

A child stands in front of his Brooklyn school last year. Beyond the logistics of reopening, questions remain around how will teaching and learning look different this year.

José A. Alvarado Jr. for Chalkbeat

On the last day of school in June, many educators and families exhaled, looking forward to a brighter year in September. Vaccination rates tracked up, and COVID numbers dropped.

The scene dramatically shifted just weeks later. Vaccines are indeed “a game changer,” as Mayor Bill de Blasio has said, but breakthrough cases are happening as the highly transmitted delta variant has gained a foothold in New York City. Meanwhile, more than half of the city’s schoolchildren are under 12 and remain ineligible for the vaccine.

As the city’s 1,600 public schools open Monday, de Blasio remains steadfast against a remote learning option, banking on vaccines as the first line of defense this school year. All public school teachers as well as pre-k educators and after-school staff with city-funded contracts must be vaccinated with at least one dose by Sept. 27. And while the mayor isn’t planning a vaccine mandate for all eligible students, officials are offering vaccines at 700 school sites when buildings reopen, and the shots are required for high risk sports and after-school activities.

That’s on top of other layers of protection against the virus, including mandatory masking, improved ventilation, two air purifiers in every classroom, and three feet of social distancing “where possible,” as per federal guidance. (A lot of families, however, remain worried, especially when masks come off during lunch.)

But beyond the logistics of reopening, major questions remain around academic recovery, mental health services, and the basics of teaching and learning as all New York City schoolchildren head back to buildings for the first time since March 2020.

Here are some issues we plan to keep an eye on this school year:

Who will actually be back in the classroom?

Last school year, New York City’s public schools lost an estimated 43,000 students, or 4% of its enrollment, according to data the education department released in January. The attrition rate for that one year was more than the previous 14 years combined, Chalkbeat found.

Early signs indicate that enrollment may still be down at some schools: The number of kindergarten applications fell 12%, and middle school applications fell 6%, city figures revealed. Some schools have already told families that declining enrollment would mean fewer teachers this year, while other schools are waiting to see if children come back after they learned remotely when their families lived elsewhere last year. Families who switched to parochial or private schools last year may opt to stay there, while charter school enrollment increased last year by about 10,000, or roughly 7.5%.

Many families are still calling for a remote option, with some planning to boycott the first day of school.

City officials did not respond to queries about the number of families requesting homebound instruction for children with medical conditions or how many requested to pull their children out of buildings to homeschool them.

Will promises of mental health support be more than lip service?

The city has promised to hire an additional 500 social workers to ensure that every school has at least one social worker. Experts, educators, and students are calling for mental health clinicians in schools and also, that social emotional learning be embedded in every classroom in some way.

With some students feel anxious, especially those who have spent more than a year learning remotely, it’s important for educators to have structured opportunities for students to engage with one another, Kevin Dahill-Fuchel, the executive director of Counseling in Schools, said at a recent Chalkbeat panel focused on mental health. He emphasized the importance for educators being available to listen to students and start those “critical relationships” with them and their families.

“The last time I was in the school building, I was in my second semester sophomore year, and I’m now going into my senior year of high school, which feels like a very big jump and that’s definitely something that makes me nervous and a little bit fearful of going back,” Shivali Korgaonkar, a Stuyvesant High School student, said at the event.

There are also questions about what school discipline will look like when children return to buildings. Suspensions dropped dramatically as children were remote, though still disproportionately affected Black students. The disparities in discipline were among the reasons that many families wanted to keep their children remote again this year.

Will students with disabilities get their promised support?

The disruption in learning has been particularly difficult for many students with disabilities, especially those who struggled with remote physical or occupational therapy or limited access to a special education teacher. City officials announced a roughly $251 million plan claiming that every student with an individualized education program — or roughly 200,000 children with disabilities — would be eligible for extra special education programming after school and on Saturdays in addition to whatever services they normally receive.

The “vast majority” of the funding would flow to school budgets to provide services outside the traditional school day, officials said, with principals scheduling times that work well for their families. The services are expected to kick in by early November, officials said.

But several principals told Chalkbeat as of last week that they hadn’t heard anything about this plan nor had they received any funding yet.

Education officials said that schools would receive funding for these programs in the next few weeks, and that principals recently received separate funding under the Academic Recovery program to begin planning for these special education services.

“Over the next few weeks schools will be reviewing student progress, determining what services each child needs, planning their after-school or Saturday schedules and more,” education department spokesperson Sarah Casasnovas said in an email. “All schools will have the resources they need to offer this critical support to every student with an individualized education program.”

Will the ‘situation room’ be able to stay on top of positive cases?

De Blasio has repeatedly said he expects fewer school building closures this year, and that may be true given the higher threshold for building closures, which will be done on a case-by-case basis. But quarantines and classroom closures aren’t expected to disappear, as evidenced by the hundreds of classroom closures in the first month that charter schools have been open this school year, Chalkbeat found. While elementary schools are expected to close full classrooms, middle and high schools students could be in for a confusing ride this year in terms of “office hours” and keeping up with coursework.

With roughly 1 million children expected back on campus this year — compared to about 365,000 in buildings by the end of last year — watchdogs are concerned that the “situation room” might be overwhelmed with responding to positive cases. The inter-agency rapid response team is charged with figuring out which classes might need to close and which students might need to stay home. It could get complicated to determine who can stay or not (for instance, vaccinated children can remain in buildings if they have no symptoms). Adding to the hurdles: many middle and high schoolers will be moving from class to class with different kids in each course.

Yet, despite having 2.5 times as many children in school buildings this year, the situation room’s hours are being significantly reduced. On weekdays, it’s now open from 7 a.m. to 3:30 p.m., according to a recent newsletter the education department sent principals. That closing time is four hours earlier than last year.

Brooklyn City Council member Mark Treyger, a former teacher who heads the education committee, wondered whether the situation room could handle the school system at full capacity, and expressed concern about all of the time that principals had to spend on COVID-related conversations with the situation room, taking them away from instruction.

“The more time they’re doing, whether it’s contact tracing, situation room coordination, communication with families about cases,” he said at a recent council hearing, “there’s going to be a cost here.”

How many assessments will kids get, and how will they help?

In an effort to understand where children are academically, schools are expected to conduct assessments at least three times a year, starting in kindergarten. The city is devoting $36 million for additional screening this year, including the cost of training teachers to deliver the assessments.

Roughly $3 million of that is earmarked for K-2 literacy assessments, which are designed to flag struggling readers. Students in grades three to 12 will be given assessments in English as well as math to help give educators a baseline understanding of where students are and track their progress throughout the year.

But the question remains: What will happen after students are assessed and identified as having challenges? What specific training will be provided to educators to help them respond?

“We don’t want to see this just left up to individual schools for everyone to do their own thing,” Sarah Part, a policy analyst at the nonprofit Advocates for Children, previously told Chalkbeat.

Will a new chancellor take over mid-year?

Odds favor Democratic nominee Eric Adams taking over as the city’s chief executive in January 2022, and that could mean a new chancellor with a new set of priorities.

Many political insiders believe he will tap David Banks to lead the nation’s largest school system. The founding principal of the Eagle Academy for Young Men — the first school in a network of all-boys public schools in New York City — is a trusted advisor of Adams, and was standing with him on the night the Brooklyn borough president won the Democratic primary.

(Banks is one of Porter’s mentors. He was the founding principal of the Urban Assembly school in the Bronx where Porter taught and eventually served as principal.)

“Banks is the favorite, but Ellis, Treyger, and Porter are still worthy of mention, as would breaking tradition by putting all four before the public — or just a single nominee — for public questioning by the City Council or Panel for Education Policy prior to appointment,” said Bloomfield, a proponent of a public search process for chancellor.

A new administration brought Bloomfield a dose of optimism: “Adams’ lack of a detailed education plan and experience might be a plus by letting education policy be largely dictated by an educator at the DOE with NYC school experience instead of by the mayor’s office.”