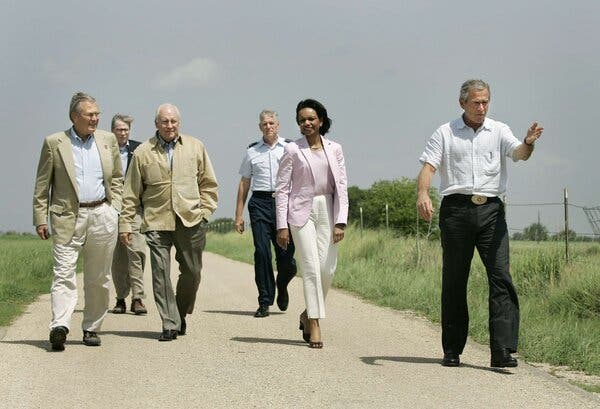 Maureen Dowd had a column yesterday in The New York Times entitled, “Manning Up, Letting Us Down,” that commented on the tendency of American presidents and their close advisers to exhibit their machismo when faced with challenges.

She starts with George W. Bush, Dick Cheney, and Donald Rumsfeld and what got us into Iraq and Afghanistan.  She concludes with Joe Biden and the recent tough stands he is taking with coronavirus and vaccinations.

She also throws a knock at some of the women in power.  “There were women who helped, too, including Condi Rice, Judy Miller and Hillary Clinton, whose husband advised her to vote for Iraq war authorization and famously told Democrats after 9/11, “When people feel uncertain, they’d rather have someone who’s strong and wrong than somebody who’s weak and right.”

She saves her best for the “faux tough-guy” Donald Trump, who was never one to miss a cheesy tableau of machismo but wimps out when the going gets tough.   When he riled  up his supporters on Jan. 6 to swarm the Capitol, and telling them “we’re going to walk down and I’ll be there with you,” “Rambo/Rocky” Trump retreated to the Oval Office to watch the chaos on TV.

The entire column is below.  A good read!

Manning Up, Letting Us Down

I’m not one of those people who think women make naturally better leaders than men, more collegial and collaborative. I’ve covered enough women in the upper ranks, and worked for and with enough women, to know that it depends on the individual.

Yet when I look back at 9/11 and the torrent of tragic, perverse blunders that followed, I think about men seized by a dangerous strain of hyper-masculinity; fake tough-guy stuff; a caricature of strength — including the premature “Mission Accomplished” scene of George W. Bush strutting on an aircraft carrier in his own version of “Top Gun.”

All of that empty swaggering ended up sapping America and making our country weaker.

Dick Cheney and Donald Rumsfeld wrecked W.’s presidency, with their overweening ideas about big-stick executive power, developed in the Ford administration when they were feeling crimped by post-Watergate restrictions; with their determination to exorcise our post-Vietnam ambivalence about using force; and with their loony plan to establish America as the sole superpower by preemptively striking potential foes. (Cheney, always ready to bomb despite his five deferments during Vietnam.) And of course, there was that most belligerent and shameful act: sanctioning torture.

This unholy pair of consiglieres played into W.’s fear that he would be called a wimp, as his father once was, if he did not go along with the guns-blazing, facts-be-damned case to sideline Afghanistan and invade Iraq, which had nothing to do with 9/11.

W.’s parents were brimming with concern about the deleterious effects of Cheney and Rumsfeld. (Bush senior later publicly dismissed them as “iron ass” Cheney and “arrogant” Rumsfeld.) Yet even after things started going badly wrong, W. confided in conservative columnists that he had to admire the “brass balls” of the two older men.

A top commander in Afghanistan once told me that he was confounded about why we invaded Iraq. Weren’t we playing into Osama bin Laden’s hands by occupying two Muslim countries?

Yes. But W. liked the idea of upstaging his father, an actual war hero.

In the ramp-up to the Iraq war, Washington was a veritable bro-fest, men at the top of government and journalism egging on the war or turning a willful blind eye to the weak casus belli.

There were women who helped, too, including Condi Rice, Judy Miller and Hillary Clinton, whose husband advised her to vote for Iraq war authorization and famously told Democrats after 9/11, “When people feel uncertain, they’d rather have someone who’s strong and wrong than somebody who’s weak and right.”

But I will never forget how many top male editors and writers reacted after Colin Powell made his speech at the United Nations in 2003 making the case for war with Iraq. The secretary of state had holed up with George Tenet, the head of the C.I.A., trying to scrub out the bogus stuff that Cheney and Co. were stuffing into the speech. But he didn’t get it all out. His case was risibly weak, as was the National Intelligence Estimate.

Yet many of my male colleagues did not see Powell’s case as limp and ginned up, simply an excuse to go kick some Arabs, any Arabs, so that they would never look at us cross-eyed again. The guys saw the case as strong. I asked a friend, a man who worked at another publication, about this macho invasion fever.

Unfortunately, the horrors this “shock and awe” crew unleashed did not shock the country enough to stamp out the mania of this self-defeating streak of hyper-masculinity.

After the respite of Barack Obama, Donald Trump became president. When Trump was running in the Republican primaries, focus groups reported that the quality voters most admired in the reality show star was “balls.” (He even referenced his anatomy during a debate.) His fans were posting memes of him as Rambo, quite an upgrade for Cadet Bone Spurs, and Trump himself tweeted a picture of himself as a shirtless Rocky. All this, even though he would later hit the White House bunker during the Black Lives Matter protests.

After riling up his supporters on Jan. 6 to swarm the Capitol, and telling them “we’re going to walk down and I’ll be there with you,” Rambo/Rocky retreated to the Oval Office to watch the chaos on TV.

Trump’s faux tough-guy routine led to the lethal political divide on masks, which undermined our ability to beat the virus. When Trump got Covid, he was happy to accept all the special medications he could get from his large team of doctors at Walter Reed. Yet he continued to act as though Covid was a minor annoyance, signaling to his red-state supporters that masks were for wimps.

Never one to miss a cheesy tableau of machismo, Trump is providing ringside commentary on a boxing match on 9/11 at the Hard Rock Casino in Florida between Evander Holyfield, 58, and Vitor Belfort, 44. During a promotional event for the Hasbeenpalooza, the 75-year-old bragged that he’d like to beat up the 78-year-old Joe Biden in the ring, that it would be his “easiest fight” and that Biden would “go down within the first few seconds.”

And though Biden does let slip the occasional schoolyard taunt, this president, blessedly, is not generally a hyper-masculine style of leader. He is digging his way out from under the damage caused by Republican predecessors who used that approach to mask their own insecurities and inadequacies.

Biden is taking a tougher stance on vaccines to force more Covid deniers to get the shots to protect them and the rest of us. He pulled us out of the quicksand of Afghanistan. And hopefully, he has something better to do on 9/11 than climb into a ring with Trump.