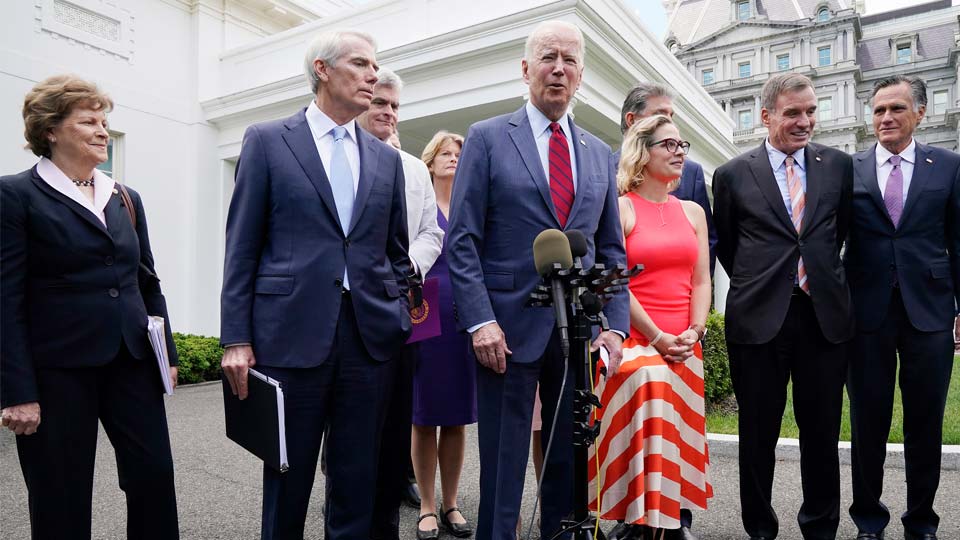 The Senate yesterday voted to begin work on a nearly $1 trillion national infrastructure plan after weeks of starts and stops once the White House and a bipartisan group of senators agreed on major provisions of the package.

President Joe Biden welcomed the accord as one that would show America can “do big things.” It includes the most significant long-term investments in nearly a century, he said, on par with building the transcontinental railroad or the Interstate highway system.

“This deal signals to the world that our democracy can function,” Biden said ahead of the vote Wednesday night. “We will once again transform America and propel us into the future.”

After weeks of negotiations, the rare bipartisan showing on a 67-32 vote to start formal Senate consideration showed the high interest among senators in the infrastructure package. But it’s unclear if enough Republicans will eventually join Democrats to support final passage.

Senate rules require 60 votes in the evenly split 50-50 chamber to proceed for consideration and ultimately pass this bill, meaning support from both parties. As reported by the Associated Press.

The outcome will set the stage for the next debate over Biden’s much more ambitious $3.5 trillion spending package, a strictly partisan pursuit of far-reaching programs and services including child care, tax breaks and health care that touch almost every corner of American life. Republicans strongly oppose that bill, which would require a simple majority, and may try to stop both.

Lead GOP negotiator Sen. Rob Portman of Ohio announced the bipartisan group’s agreement on the $1 trillion package earlier Wednesday at the Capitol, flanked by four other Republican senators who had been in talks with Democrats and the White House.

After voting, Portman said the outcome showed that bipartisanship in Washington can work and he believed GOP support would only grow. “That’s pretty darn good for a start,” he said.

That group had labored with the White House to salvage the deal, a first part of Biden’s big infrastructure agenda. Swelling to more than 700 pages, the bill includes $550 billion in new spending for public works projects.

In all, 17 Republican senators joined the Democrats in voting to launch the debate, but most remained skeptical. The GOP senators were given a thick binder of briefing materials during a private lunch, but they asked many questions and wanted more details.

According to a 57-page GOP summary obtained by The Associated Press, the five-year spending package would be paid for by tapping $205 billion in unspent COVID-19 relief aid and $53 billion in unemployment insurance aid some states have halted. It also relies on economic growth to bring in $56 billion, and other measures.

Giving Wednesday night’s vote a boost, Senate GOP leader Mitch McConnell announced late in the day he would vote to proceed, though whether he will support the final bill remains uncertain. The Republican negotiators met with McConnell earlier Wednesday and Portman said the leader “all along has been encouraging our efforts.”

Sen. Kyrsten Sinema of Arizona, a lead Democratic negotiator who talks often with Republicans also spoke with Biden on Wednesday and said the she hoped the results showed “our government can work.”

Democrats, who have slim control of the House and Senate, face a timeline to act on what would be some of the most substantial pieces of legislation in years.

Filling in the details has become a month-long exercise ever since a bipartisan group of senators struck an agreement with Biden in June over the broad framework.

The new spending in the package dropped from about $600 billion to $550 billion, senators said, as money was eliminated for a public-private infrastructure bank and was reduced in other categories, including transit.

The package still includes $110 billion for highways, $65 billion for broadband and $73 billion to modernize the nation’s electric grid, according a White House fact sheet.

Paying for the package has been a slog throughout the talks after Democrats rejected a plan to bring in funds by hiking the gas tax drivers pay at the pump and Republicans dashed an effort to boost the IRS to go after tax scofflaws.

Along with repurposing the COVID-19 relief and unemployment aid, other revenue would come from the sale of broadcast spectrum, reinstating fees that chemical companies used to pay for cleaning up the nation’s worst hazardous waste sites and drawing $49 billion from reversing a Trump-era pharmaceutical rebate, among other sources.

The final deal could run into political trouble if it doesn’t pass muster as fully paid for when the Congressional Budget Office assesses the details. But Portman said the package will be “more than paid for.”

House Democrats have their own transportation bill, which includes much more spending to address rail transit, electric vehicles and other strategies to counter climate change.

House Speaker Nancy Pelosi did not commit to supporting the package until she sees the details, but said Wednesday she’s “rooting for it.”

Pelosi said, “I very much want it to pass.”

A recent poll from The Associated Press-NORC found 8 in 10 Americans favor some increased infrastructure spending.

Senators in the bipartisan group have been huddling privately for months. The group includes 10 core negotiators, split evenly between Democrats and Republicans, but has swelled at times to 22.

Transit funding has remained a stubborn dispute, as most Republican senators come from rural states where highways dominate and public transit is scarce, while Democrats view transit as a priority for cities and a key to easing congesting and fighting climate change.

Expanding access to broadband. which has become ever more vital for households during the coronavirus pandemic, sparked a new debate. Republicans pushed back against imposing regulations on internet service providers in a program that helps low-income people pay for service.”

This is a great move forward for our nation and for democratic non-partisan principles.  Below are some of the details of the bill.

Key Provisions of the Infrastructure Bill

The Senate has voted, 67-32, to take up a nearly $1 trillion national infrastructure plan after President Joe Biden and a bipartisan group of senators reached agreement on major provisions of the package.

The White House is projecting that the investments will add, on average, about 2 million jobs per year over the coming decade. A 57-page Republican summary of the agreement obtained by The Associated Press also outlines how the lawmakers hope to pay for the additional spending.

Here’s a breakdown of where the dollars would go, according to a summary released by the White House on Wednesday.

— $110 billion for roads and bridges. The $40 billion for bridges is the single largest dedicated bridge investment since the construction of the Interstate highway system

— $39 billion for public transit. The money would be used to modernize bus and subway fleets and bring new service to communities. That’s about $10 billion less than senators negotiating the agreement had originally designated.

— $66 billion for passenger and freight rail. The money would be used to reduce Amtrak’s maintenance backlog, improve Amtrak’s 457-mile-long Northeast Corridor as well as other routes and make safety improvements to rail grade crossings.

— $5 billion for the purchase of electric school buses and hybrids, reducing reliance on school buses that run on diesel fuel.

— $17 billion for ports and $25 billion for airports to reduce congestion and address maintenance backlogs.

— $55 billion for water and wastewater infrastructure, including funding to replace all of the nation’s service lines using lead pipe.

— $65 billion to expand broadband access, a particular problem for rural areas and tribal communities. Most of the money would be made available through grants to states.

— $73 billion for modernizing the nation’s electric grid and expanding the use of renewable energy.

And here’s a breakdown of pay-fors in a Republican summary of the plan:

— Tapping about $205 billion in unspent COVID-19 relief aid. Congress has provided about $4.7 trillion in emergency assistance in response to the pandemic.

— Drawing on about $49 billion by further delaying a Medicare rule giving beneficiaries rebates that now go to insurers and middlemen called pharmacy benefit managers. The trade association for drug manufacturers argued that the rule would help reduce patients’ out-of-pocket costs, but the Congressional Budget Office had projected that it would increase taxpayer costs by $177 billion over 10 years.

— Raising an estimated $87 billion in spectrum auctions for 5G services.

— Restarting a tax on chemical manufacturers that had expired in 1995, raising about $13 billion. The money had been used to help fund the cleanup of Superfund sites. Also, selling oil from the Strategic Petroleum Reserve would add about $6 billion.

— Strengthening tax enforcement when it comes to crypto currencies, raising about $28 billion.

— Relying on projected economic growth from the investments to bring in about $56 billion.