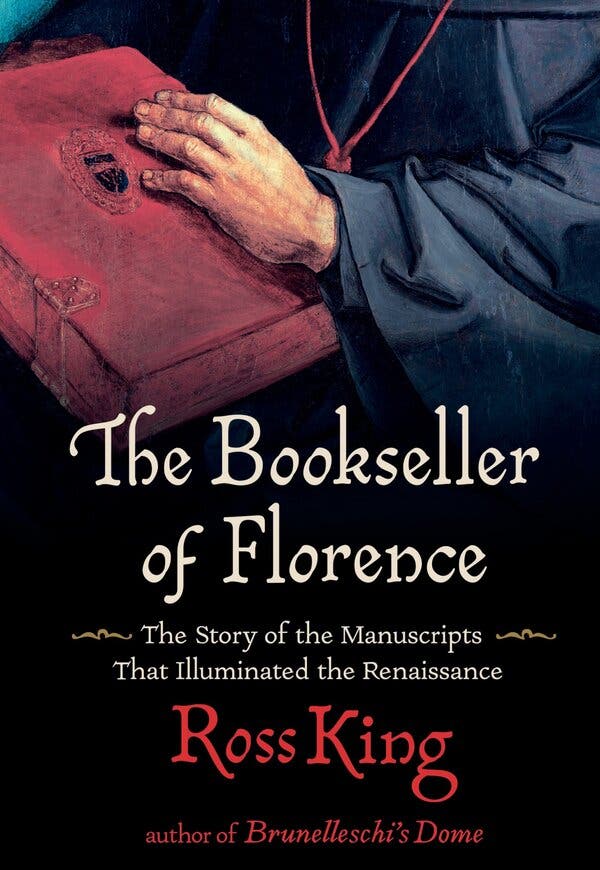 I have just finished reading Ross King’s new book, The Bookseller of Florence:  The Story of the Manuscripts That Illuminated the Renaissance. Ross is a best-selling and award-winning author of books on major Renaissance figures including Brunelleschi, Michelangelo, and Leonardo da Vinci.,  In The Bookseller…, he examines the life of Vespaisiano da Bisticci who was “the king of all booksellers” at a time when books were made by hand.  Vespaisiano skill was to assemble talented people to uncover the knowledge and the source material from classical works that were a thousand years old and in many cases “lost’ to the literate world.  He would then manage the tedious and meticulous translation and transcribing of these works into beautiful manuscripts.  These projects minimally took months and in many cases years to complete.  His customers were among the most powerful individuals in Europe including kings, popes, and the Medici family.  King also provides interesting details of how print technology evolved from the work of hand scribes to the printing press. Below is a review that appeared in the  New York Times Book Review.

I highly recommend The Bookseller… to book lovers and to anyone interested in this period of Western history!

Where are you off to, once the Great Confinement relaxes its bleak grip? A socially distanced movie house? A favorite pizza joint? Call me an elitist, but I’ll be heading to my local indie bookstore. Amazon has been delivering a steady supply of books to unchain our imaginative lockdown, but they have arrived in the same packaging that could just as well bring replacement light bulbs or moth traps. What’s missing is the ungloved, unhurried browse, the rifling through the stacks, the chat at the checkout desk. So if you want to celebrate the place that bookmaking and bookselling still have in our lives, notwithstanding all those hours captive to the digital glimmer, you could do a lot worse than immerse yourself in Ross King’s rich history of Vespasiano da Bisticci, “the king of the world’s booksellers,” in 15th-century Florence.

Books about books — their publishing, selling and collecting — are a specialized genre, but over the years they have included some brilliantly illuminating classics. Robert Darnton’s “The Business of the Enlightenment,” about the buccaneering publisher Charles-Joseph Panckoucke and the marketing of the Encyclopédie Méthodique, transformed our understanding of how Enlightenment ideas found readers and partisans. Alberto Manguel’s “A History of Reading” and “The Library at Night” are poetic meditations on the needful habit. Edward Wilson-Lee’s recent “The Catalogue of Shipwrecked Books” is a plunge into the obsessive quest of Christopher Columbus’s son Hernando to canvass the entire world, not via the thankless ordeals of navigation but rather through a universal library of more than 15,000 works about absolutely everything, everywhere.

King is himself a compulsive bibliomane. His page-turning novel “Ex-Libris” had its bookseller hero traipsing around 17th-century Prague in search of replacements for a library destroyed in the English Civil War. But he is best known for a prolific output of popular and well-researched nonfiction books, each turning on heroic moments in the history of art: the raising of Brunelleschi’s dome for Florence’s cathedral; Michelangelo’s battle to paint the Sistine Chapel ceiling.

Vespasiano is an altogether more obscure quarry. Starting from modest beginnings as the son of a worker in the wool trade, he was forced to leave school at 11, owing to his father’s death and family impoverishment. But an apprenticeship with a bookbinding house launched a career that wound up with him as the go-to man for the libraries of humanist popes and princes, servicing the truism that the exercise of power was conditional on the absorption of knowledge. Five million manuscript books were produced in 15th-century Europe, and Vespasiano was at the hub of that spinning wheel of learning, piety and pleasure.

The working assumptions of King’s book are traditional, but none the worse for that. The hunting down and editing of all-but-lost texts from classical antiquity, and the circulation of the results as bound codices in editions of hundreds, allowed the reawakened ancients — Plato, Cicero and Livy, for example — to become, paradoxically, the enablers of humanist modernity. The most powerful restatement of this history is Stephen Greenblatt’s brilliant “The Swerve,” which recounts how Poggio Bracciolini, a dogged manuscript hunter and prolific author in his own right (including of an anthology of jokes), unearthed in a German monastery a manuscript copy of “De Rerum Natura” (“On the Nature of Things”), by the epicurean writer Lucretius, with its startlingly modern assertions of gone-missing divinity: a world constructed from atoms, and earthly happiness as the essential point of life.

King retreads some of that story and his major characters are largely a roundup of the usual suspects: Cosimo and Lorenzo de’ Medici; Marsilio Ficino, champion of a rediscovered Plato against his Christian prosecutors; and the one-eyed condottiere Federico da Montefeltro of Urbino, a merciless slaughterer of men while being a sophisticated patron of the likes of Piero della Francesca and the young Raphael.

Though Vespasiano himself was the author of a collection of biographies of “illustrious men,” the real pleasure of King’s book is its detailed evocation of the physical grind of bookmaking. A refined work of philosophy, copied from the ancients, would begin with a bookmaker’s visit to the butcher for the best possible hide for parchment: “After a week or two the hides would be fished from the [fermenting] vat, bathed in limewater and then attached with pegs to wooden frames and stretched tight as the remaining hair and flesh was scraped away with a crescent-shaped knife. Still taut on the frame, they would be rubbed with chalk or bone dust and scrubbed with a pumice stone, or perhaps the bone of a cuttlefish.” The true heroes of this book are less the mouthy showboaters of humanism than the hard grafters like Ser Antonio, one of Vespasiano’s master scribes, who in a single year turned out two manuscript copies of Leonardo Bruni’s 600-page “History of Florence.”

Into Vespasiano’s seductively tactile world of vellum and parchment — a world so fastidious that a page from the hairy side of the skin could face only a like hairy page, and a flesh-side page the same — crashed the clatter of movable type. But King rightly resists any simplified chronology of the transition inaugurated by the arrival of print from the German north that prompted scribes to lay down their quills. For much of the 15th century, the two forms of bookmaking lived alongside each other, much as electronic and paper books do in our own time. In its early years print was a business gamble; many more copies were made than necessarily found buyers. Different city-states opted for different media. Venice was hot for the presses while for many years — astoundingly — Florence had no printers at all, a rejection King attributes in part to their reputation for speed over exactness. Woe betide the thinking world should print find its way into the hands of the wrong people. Lorenzo de’ Medici’s librarian Angelo Poliziano thought that print ushered in “the most stupid ideas,” which “can, in a moment, be transferred into a thousand volumes and spread abroad.” Lorenzo himself was so devoted to the older form that he actually reversed expectations by having printed books copied out in manuscript.

If the quattrocento was the sunset of manuscript publishing, it was, then, gloriously prolonged. Ultimately, though, a whole new market for writing opened up that was a lot less exalted than philosophical contests pitting Aristotelians against Platonists. The production of satire, fiction, plays and ballads as well as religious and political polemics would ensure the victory of print. In a wonderful passage King describes an entrepreneurially minded friar, Fra Domenico da Pistoia, who established a commercially successful printing press at the convent of San Jacopo di Ripoli in the western outskirts of Florence, where nuns, many of whom were already scribes, were retrained as type compositors. It was one thing, though, to produce the “Legends of St. Catherine of Siena,” quite another to be let loose on Boccaccio’s “Decameron.” None of the Ripoli press nuns, not even the speediest of the compositors, could be allowed to set eyes on the story in which brides of Christ merrily fornicate with the convent gardener.

“The Bookseller of Florence” doesn’t pretend to wade into debates in the sociology of culture; if you’re looking for McLuhanite considerations on whether form conditions content you won’t find it in Ross King’s pages, although I was struck by the fact that print in its early history strove to emulate manuscript in both the style of its characters and the basic shape of a codex of bound pages. What you will find in abundance here is a historical celebration of the Greek humanist Cardinal Bessarion’s belief that books “live, they converse and speak with us, they teach us, educate us, console us.” Painfully deprived as we have been of the immediate joys of friendly chatter and animated argument, have we ever valued the company of books more dearly?