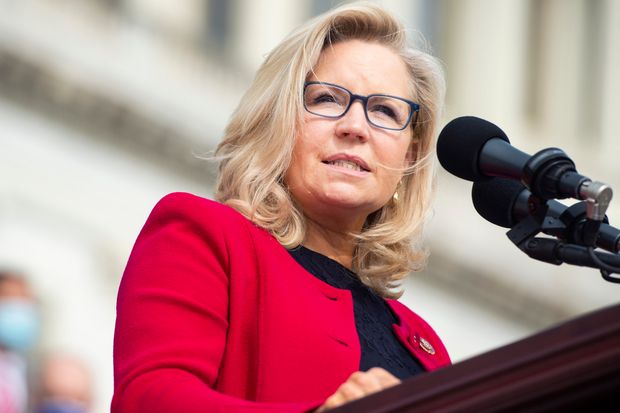 The editorial board for the conservative Wall Street Journal took aim at the GOP Tuesday for its infighting over the 2020 election and criticized the party’s effort to oust Rep. Liz Cheney (R-Wyo.) for “daring to tell the truth” about it.

Republicans have been trying to remove Cheney, the third-ranking Republican in the House, from her leadership position because she refutes former President Donald Trump’s lie that the election was rigged. She was one of 10 House Republicans who voted to impeach Trump for inciting the violent Jan. 6 insurrection on the U.S. Capitol.

Her refusal to get in line has rankled Trump and other Republicans. On Wednesday, House Minority Leader Kevin McCarthy (R-Calif.) was caught on a hot mic complaining that “I’ve had it with her” and saying that “someone just has to bring a motion, but I assume that will probably take place.”

“But Mr. McCarthy knows Ms. Cheney is right,” the Journal’s editorial said. “The election wasn’t stolen, yet Mr. Trump wants an endorsement of his stolen claim to be a litmus test for every Republican candidate.”

“She may be ousted because she is daring to tell the truth to GOP voters,” the editorial added, “and at personal political risk.”

The Journal’s editorial board said that purging Cheney for her honesty would diminish the party and called on Republicans to find a way to speak the truth to voters in the 2022 midterm elections.

It is heartening that the Wall Street Journal, which generally supports conservative Republican Party positions, is taking this stance.