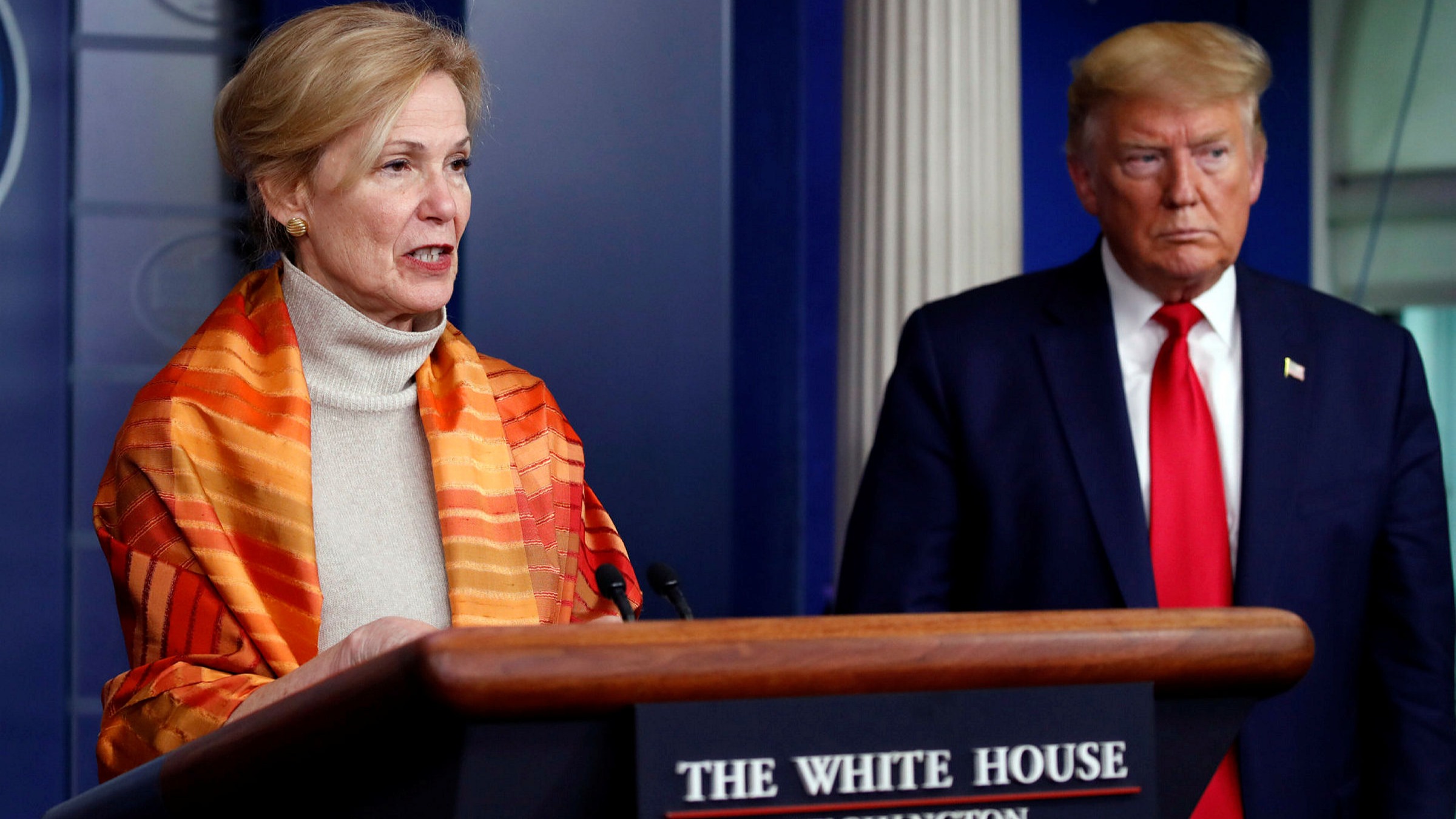 Dr. Deborah Birx, the coordinator of the White House Task Force on the coronavirus pandemic, is supposedly seeking to have a role in the Joe Biden administration.  She had a sterling reputation as a former U.S. Army physician, a globally recognized AIDS researcher and an Obama administration holdover, before her involvement with Donald Trump.  As has been the case with so many others during his administration, it appears Trump has damaged her reputation or at least frayed it a bit.  In the early months of the pandemic, she and Anthony Fauci were frequently brought before the press to inform and make recommendations about dealing with the pandemic.  When their professional judgements ran counter to Trump’s ideas, they had to take professional stands.  Fauci did.  Birx did not.  Both were then relegated to secondary roles in the pandemic fight.  Fauci has been able to maintain an audience for his views but Birx has stayed in the shadows. Below is an article describing her situation, courtesy of the Associated Press.

WASHINGTON (AP) — When Dr. Deborah Birx was brought into President Donald Trump’s orbit to help fight the coronavirus pandemic, she had a sterling reputation as a former U.S. Army physician, a globally recognized AIDS researcher and a rare Obama administration holdover.

Less than 10 months later, as Trump’s time in office nears its end, the White House coronavirus task force coordinator’s reputation is frayed. And after serving every president since Ronald Reagan, her future in the incoming Joe Biden administration is uncertain.

Over the course of the pandemic, Birx drew criticism from public health experts and Democratic lawmakers for not speaking out forcefully against the Republican president when he contradicted advice from medical advisers and scientists about how to fight the virus.

On everything from Trump’s aversion to masks to his dangerous suggestion that ingesting bleach might ward off the virus, critics and backers say Birx stepped carefully to try to maintain her influence in hopes of pushing the president to listen to the scientists.

“The president’s departure from reality become so extreme that it put her and others on the task force in an untenable position,” said Michael Weinstein, who heads the AIDS Healthcare Foundation and got to know Birx professionally after she was named the global AIDS coordinator in 2014.

“History will have to judge whether they enabled the president by giving him credibility based on their expertise or whether she and the others did more in helping prevent more people from being hurt by the craziness,” he said.

Birx has made clear that she wants to stick around to help the Biden administration roll out vaccines and persuade the American people to be inoculated.

She has reached out to Biden advisers in recent days as she tries to make the case for a role in the incoming Democratic president’s virus response effort, according to a person familiar with the Biden team’s personnel deliberations and a Trump administration coronavirus task force official. Both spoke on condition of anonymity to discuss internal discussions.

Birx has conveyed that, at best, she envisions herself in a scaled-back role as Biden shapes his own team. Biden has already appointed transition co-chair and Obama administration alumnus Jeffrey Zients to serve as White House coronavirus coordinator. But Birx’s reluctance to publicly challenge Trump when he downplayed the virus has left some in Biden’s transition skeptical that she retains credibility with the public, according to the person familiar with Biden transition deliberations.

Speaking at a Wall Street Journal CEO conference on Tuesday, Birx, a public servant for 40 years, said she planned to remain in government but has yet to hear from the Biden transition team about how or if she’ll be used on the pandemic.

Birx was pulled away from her ambassadorial post as the U.S. global AIDS coordinator to assist the task force. She worked alongside her mentor, Dr. Anthony Fauci, the nation’s top infectious-disease expert, who was less hesitant to directly contradict questionable statements by Trump. She was appointed to the AIDS post in 2014 by President Barack Obama, and it is up to Biden whether to return her to that position.

“I think the one thing I bring to this is really understanding epidemics around the globe,” she said.

Birx certainly had fans in Biden’s orbit before and immediately after she was tapped to serve as coronavirus coordinator in the Trump White House.

Biden’s chief of staff, Ron Klain, called Birx “great.” Former Secretary of State John Kerry, who will serve as a special envoy on climate for Biden, described Birx at her 2014 swearing-in ceremony to serve as the U.S. global AIDS coordinator as someone who “embodies the best of what it means to be a pioneer, to be a practitioner, and a public servant all rolled into one.”

In her coronavirus task force role, Birx faced criticism for defending Trump after he suggested during an April briefing that ultraviolet light and ingesting disinfectants could serve as treatment for the virus. Birx explained that Trump “likes to talk that through out loud and really have that dialogue.”

Birx urged Trump to follow the data as he pushed to relax social distancing restrictions. She wasn’t above flattering the president. She faced criticism after she said in a television interview early in the crisis that Trump’s “ability to analyze and integrate data that comes out of his long history in business has really been a real benefit during these discussions about medical issues.”

Jeremy Konyndyk, now a member of the Biden transition’s Health and Human Services team, applauded Birx’s appointment early in the crisis. But Konyndyk, who led USAID’s Office of US Foreign Disaster Assistance in the Obama administration, soon became a critic.

“My confidence in Dr. Birx has been eroding in recent weeks,” Konyndyk tweeted after Birx defended Trump’s decision in April to suspend funding for the World Health Organization. “But with this, it is lost. This statement is not credible as public health analysis, and is clearly not intended to be.”

Weeks later, Konyndyk tweeted that Birx “has repeatedly undermined her scientific credibility, publicly, in order to shield the President.”

Trump was irate with Birx for what he called a “pathetic” response to criticism from House Speaker Nancy Pelosi. The Democratic speaker said in early August that she had “no confidence” in Birx for not pushing back harder on the president as he repeatedly diminished the impact of the virus.

Days later, Trump brought on as a pandemic adviser Dr. Scott Atlas, a neuroradiologist and fellow at Stanford University’s conservative Hoover Institution and a critic of virus-related restrictions on the economy. Birx’s public role at the White House was sharply reduced after that, and she spent recent months traveling the country urging states to be more aggressive in fighting the virus.

In recent days, Birx has herself become more pointed in her criticism of Trump.

Asked during an appearance on NBC’s “Meet the Press” on Sunday about officials in the Trump administration repeatedly flouting public health experts’ pleas for Americans to avoid large gatherings and commit to wearing face masks, Birx voiced concern about leaders “parroting myths.”

“And I think our job is to constantly say those are myths, they are wrong and you can see the evidence base,” Birx said.