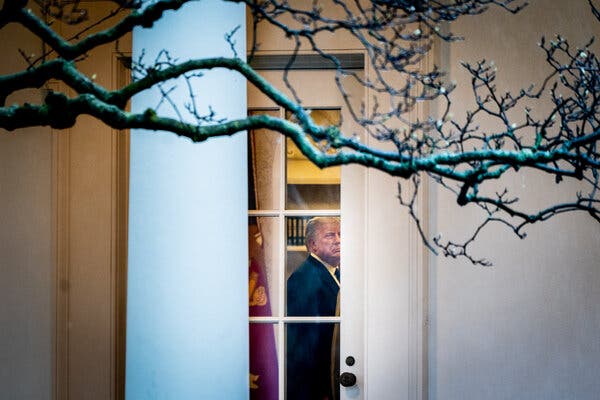 Maggie Haberman, New York Times columnist, has a piece today commenting on President Trump’s survival strategies as those around him increasingly advise him to concede the election to Joe Biden.  While speculating on various options such as running for election again in 2024 or  starting a media business to compete with Fox News, Haberman comments that Trump spends his days toggling between his White House residence and the Oval Office, watching television coverage about the final weeks of his presidency. His mood is often bleak, though he is not raising his voice in anger, despite the impression left by his tweets, which are often in capital letters.  Haberman concludes that Trump is not sure what he is going to do next and that “There is no grand strategy. He is simply trying to survive from one news cycle to the next.”

Below is her entire column!

Trump Floats Improbable Survival Scenarios as He Ponders His Future

At a meeting on Wednesday at the White House, President Trump had something he wanted to discuss with his advisers, many of whom have told him his chances of succeeding at changing the results of the 2020 election are thin as a reed.

He then proceeded to press them on whether Republican legislatures could pick pro-Trump electors in a handful of key states and deliver him the electoral votes he needs to change the math and give him a second term, according to people briefed on the discussion.

It was not a detailed conversation, or really a serious one, the people briefed on it said. Nor was it reflective of any obsessive desire of Mr. Trump’s to remain in the White House.

“He knows it’s over,” one adviser said. But instead of conceding, they said, he is floating one improbable scenario after another for staying in office while he contemplates his uncertain post-presidency future.

There is no grand strategy at play, according to interviews with a half-dozen advisers and people close to the president. Mr. Trump is simply trying to survive from one news cycle to the next, seeing how far he can push his case against his defeat and ensure the continued support of his Republican base.

By dominating the story of his exit from the White House, he hopes to keep his millions of supporters energized and engaged for whatever comes next.

The president has insisted to aides that he really defeated Joseph R. Biden Jr. on Nov. 3, but it is unclear whether he actually believes it. And instead of conducting discreet requests for recounts, Mr. Trump has made a series of spurious claims, seizing on conspiracies fanned on the internet.

The latest was on Thursday, when he falsely claimed on Twitter that Dominion voting machines switched hundreds of thousands of his votes to Mr. Biden, citing a report he had seen on the fringe network OANN, something even his supporters called ridiculous and a federal agency overseeing cybersecurity disavowed in a statement.

Advisers said his efforts were in keeping with one of his favorite pastimes: creating a controversy and watching to see how it plays out.

As a next step, Mr. Trump is talking seriously about announcing that he is planning to run again in 2024, aware that whether he actually does it or not, it will freeze an already-crowded field of possible Republican candidates. And, Republicans say, it will keep the wide support he showed even in defeat and could guarantee a lucrative book deal or speaking fees.

In the meantime, Mr. Trump has spent his days toggling between his White House residence and the Oval Office, watching television coverage about the final weeks of his presidency. His mood is often bleak, advisers say, though he is not raising his voice in anger, despite the impression left by his tweets, which are often in capital letters.

But the work of government has been reduced to something of a sideshow for the president. He has not made any public appearances except for a visit to Arlington National Cemetery on Veterans Day since an angry statement a week ago.

And he has not spoken about the coronavirus pandemic or mentioned it on Twitter despite the staggering growth in positive cases and the number of West Wing aides and outside advisers who have been diagnosed with the virus in the past week.

Several advisers have bluntly told Mr. Trump that the chances of changing the election’s outcome are almost nonexistent, including in a meeting with him on Saturday at the White House to which the president’s son-in-law, Jared Kushner, dispatched aides, even as he has generally backed Mr. Trump’s desire to keep fighting.

While most Republicans have declined to publicly oppose the president, more have become vocal that the time has come, amid the growing pandemic, to allow a transition to take place.

“Look, I’m worried about this virus. I’m not looking at what the merits of the case are,” said Gov. Mike DeWine, Republican of Ohio, about Mr. Trump’s lawsuits in an appearance on Thursday on CNN. “It would appear that Joe Biden is going to be the next president of the United States.”

Karl Rove, the architect of President George W. Bush’s presidency and an informal adviser to Mr. Trump, wrote in The Wall Street Journal on Wednesday that “closing out this election will be a hard but necessary step toward restoring some unity and political equilibrium.”

He added that after Mr. Trump’s “days in court are over, the president should do his part to unite the country by leading a peaceful transition and letting grievances go.”

A peaceful transition is not as much on Mr. Trump’s mind right now as settling scores both inside and outside the administration.

White House advisers have sent warnings to any government employees who might be looking for other jobs, have placed loyalists in the upper ranks of the Pentagon, and have been open to calls for intelligence officials to declassify documents related to the investigation into a possible conspiracy between the Trump campaign in 2016 and Russian officials.

And the president is considering firing the C.I.A. director, Gina Haspel, although some administration officials said he may not go through with it.

The president has nursed a burning anger at Fox News for calling Arizona for Mr. Biden on election night, and has entertained suggestions from allies to start some kind of competing conservative-leaning news network, whether by trying to join forces with an existing property like OANN or Newsmax, or forming a digital network of his own, as Axios reported. (The New York Times called Arizona for Mr. Biden late Thursday.)

In a tweet on Thursday, Mr. Trump continued his attacks on his once loyal supporters, declaring that Fox News’s “daytime ratings have completely collapsed.”

“Weekend daytime even WORSE,” he added. “Very sad to watch this happen, but they forgot what made them successful, what got them there. They forgot the Golden Goose. The biggest difference between the 2016 Election, and 2020, was @FoxNews!”

Several Republicans expressed doubt on Thursday that Mr. Trump would ever be able to put together anything that could overtake Fox.

And allies acknowledge that he could not do both a presidential campaign and create a news network at the same time, and they questioned whether he would keep up his animus toward Fox if it were to offer him a lucrative contributor deal once he is out of office.

Some advisers had hoped that Mr. Trump would accept the state of the race by the end of this week, but a looming recount in Georgia may delay that. The president has told some advisers that if the race is certified for Mr. Biden, he will announce a 2024 campaign shortly afterward.

The president’s goal for now is to delay certification of the election results, a process that has begun in some states. But his approach to lawsuits aimed at delaying that certification has been as scattered as his own thinking about the future.

Advisers say there may be additional lawsuits filed, but it is not entirely clear when. It also is not clear who is leading the legal efforts.

Rudolph W. Giuliani, Mr. Trump’s personal lawyer, has been a source of enormous frustration for Trump advisers. Advisers have tried to tell Mr. Trump that the fraud Mr. Giuliani is offering hope of proving simply does not exist.

Mr. Trump is getting suggestions from an array of other lawyers, as well. They include Sidney Powell, the lawyer for his former national security adviser Lt. Gen. Michael T. Flynn, who was at the Trump campaign headquarters over the weekend.

Advisers have nudged the president to stop talking about “fraud” because that has legal implications that his team has not been able to back up. So Mr. Trump has taken to pronouncing the election “rigged,” one of his favorite words but one with dangerous implications in terms of how his own supporters view the election’s ultimate outcome.