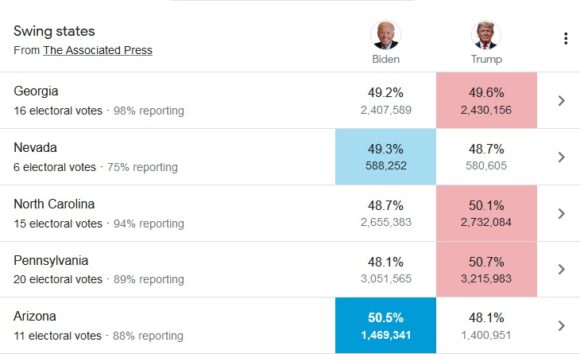 After two days of reporting presidential election results, neither Donald Trump or Joe Biden can claim victory.  The above swing state tallies (as of 11/5/20 – 3:00 am EST) show that six states are still in play.  Depending upon the final votes, either candidate can still win. Trump needs to win almost all of the above states and probably at least four.  Biden needs to win at least two.  Listening to the news commentators, Biden is making significant moves in Pennsylvania and Georgia while Trump is making a move in Arizona. The map above is courtesy of the Associated Press.

To quote New York Yankee great Yogi Berra AGAIN: “It ain’t over until it’s over.”