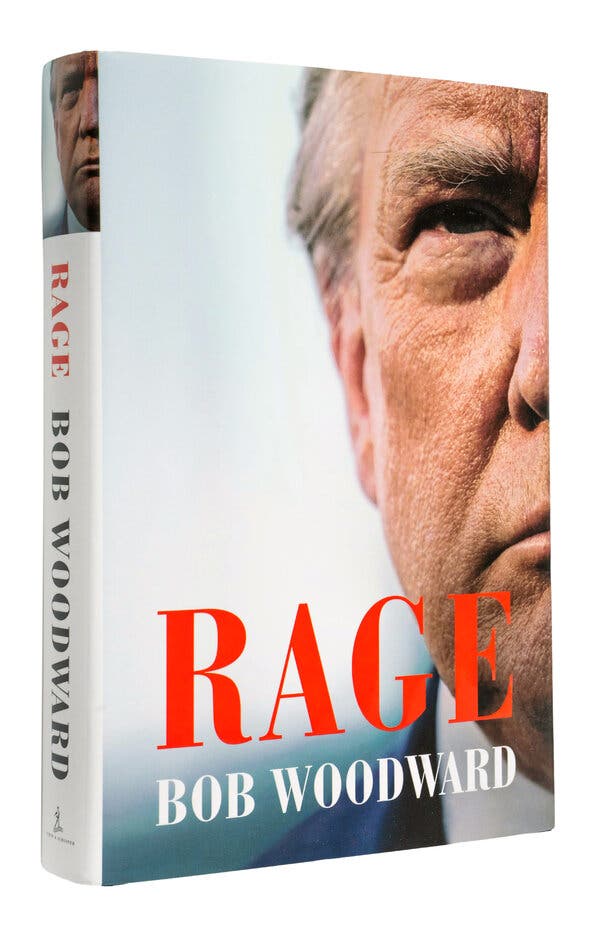 As someone who follows national news and politics, it was only natural that I would read Bob Woodward’s Rage, his most recent book reporting on Donald Trump and his presidency.  According to the publisher, Simon & Schuster, it sold over 600,000 copies in its first week. The book is carefully researched and cited throughout and includes material based on seventeen interviews with Donald Trump himself.  Why Trump would give these interviews is beyond me.

I found the 450-page book including footnotes a quick read.  I knew many of the stories in its chapters but Woodward fills in gaps in my knowledge and most of the time they are based on revealed primary sources.  There were many enlightening takeaways (below is a an article that comments on five takeaways from Rage) especially related to coronavirus, Trump’s relationships with several of his appointees including James Mattis, Rex Tillerson, and Dan Coats, and exchanges with Jared Kushner.

I agree fully with a New York Times review that concludes:

“Woodward ends Rage by delivering his grave verdict. “When his performance as president is taken in its entirety. I can only reach one conclusion: Trump is the wrong man for the job.”

“This is deadly stuff,” President Trump said of the coronavirus in a Feb. 7 interview with the journalist Bob Woodward for his upcoming book, “Rage.” But it was a vastly different story than he was telling the public at the time. Mr. Trump would later admit to Mr. Woodward that publicly, he “wanted to always” play down the severity of the virus.

Mr. Woodward conducted 18 interviews with the president for the book, which goes on sale next week. Mr. Trump also granted Mr. Woodward access to top officials inside the White House, revealing the inner workings of the president and his administration.

Mr. Trump minimized the risks of the coronavirus to the American public early in the year.

“I wanted to always play it down,” Mr. Trump told Mr. Woodward on March 19. “I still like playing it down, because I don’t want to create a panic.”

And while he was saying publicly that children were “almost immune” to the virus, he told Mr. Woodward in March: “Just today and yesterday, some startling facts came out. It’s not just old, older. Young people too — plenty of young people.”

In April, as he began to urge the country to reopen, Mr. Trump told Mr. Woodward of the virus, “It’s so easily transmissible, you wouldn’t even believe it.”

Two of the president’s top officials thought he was “dangerous” and considered speaking out publicly.

Gen. Jim Mattis, Mr. Trump’s former defense secretary, is quoted describing Mr. Trump as “dangerous” and “unfit” for the presidency in a conversation with Dan Coats, the director of national intelligence at the time. Mr. Coats himself was haunted by the president’s Twitter feed and believed that Mr. Trump’s gentle approach to Russia reflected something more sinister, perhaps that Moscow had “something” on the president.

“Maybe at some point we’re going to have to stand up and speak out,” Mr. Mattis told Mr. Coats in May 2019, according to the book. “There may be a time when we have to take collective action.”

Ultimately neither official spoke out.

“They care more about their alliances than they do about trade deals,” the president said.

And in a discussion with Mr. Woodward, Mr. Trump called the U.S. military “suckers” for paying extensive costs to protect South Korea. Mr. Woodward wrote that he was stunned when the president said of South Korea, “We’re defending you, we’re allowing you to exist.”

Mr. Woodward also reports that Mr. Trump chewed out Mr. Coats after a briefing with reporters about the threat that Russia presented to the nation’s elections systems. Mr. Coats had gone further than he and the president had discussed beforehand.

When asked about the pain “Black people feel in this country,” Mr. Trump was unable to express empathy.

Mr. Woodward pointed out that both he and Mr. Trump were “white, privileged” and asked if Mr. Trump was working to “understand the anger and the pain, particularly, Black people feel in this country.”

Mr. Woodward writes that he tried to coax the president into speaking about his understanding of race. But Mr. Trump would only say over and over that the economy had been positive for Black people before the coronavirus led to an economic crisis.

Mr. Woodward gained insight into Mr. Trump’s relationships with the leaders of North Korea and Russia.

Mr. Trump provided Mr. Woodward with the details of letters between himself and the North Korean leader, Kim Jong-un, in which the two men fawn over each other. Mr. Kim wrote in one letter that their relationship was like a “fantasy film.”

In describing his chemistry with Mr. Kim, Mr. Trump said: “You meet a woman. In one second, you know whether or not it’s going to happen.”

Mr. Trump also complained about the various investigations into ties between his campaign and Russia, saying that they were affecting his abilities as president and his relationship with President Vladimir V. Putin of Russia.

“Putin said to me in a meeting, he said, it’s a shame, because I know it’s very hard for you to make a deal with us. I said, you’re right,” Mr. Trump said.