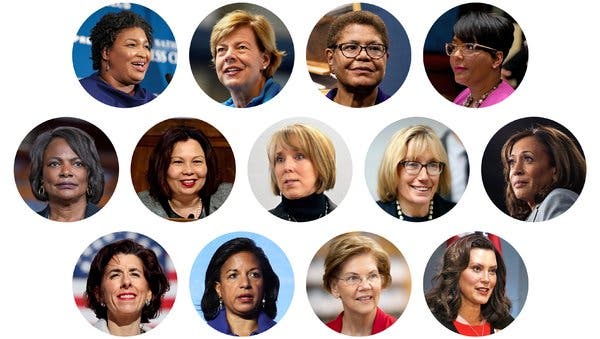 The New York Times has a featured article this morning examining how Joe Biden reduced a large list of potential running mates to four finalists before settling on Kamala Harris.  This account of Mr. Biden’s decision was based on interviews with more than three dozen people involved in the process, including advisers to Mr. Biden and Ms. Harris, allies of other vice-presidential prospects and Democratic leaders deeply invested in the outcome of the search.  Here is an excerpt.

“It was early in Joseph R. Biden’s vice-presidential search when he asked his advisers a sensitive question about Senator Kamala Harris. He kept hearing so much private criticism of her from other California Democrats, he wanted to know: Is she simply unpopular in her home state?

Advisers assured Mr. Biden that was not the case: Ms. Harris had her share of Democratic rivals and detractors in the factional world of California politics, but among regular voters her standing was solid.

Mr. Biden’s query, and the quiet attacks that prompted it, helped begin a delicate audition for Ms. Harris that has never before been revealed in depth. She faced daunting obstacles, including an array of strong competitors, unease about her within the Biden family and bitter feuds from California and the 2020 primary season that exploded anew.

Though Ms. Harris was seen from the start as a front-runner, Mr. Biden did not begin the process with a favorite in mind, and he settled on Ms. Harris only after an exhaustive review that forged new political alliances, deepened existing rivalries and further elevated a cohort of women as leaders in their party.

Ms. Harris was one of four finalists for the job, along with Senator Elizabeth Warren of Massachusetts, Gov. Gretchen Whitmer of Michigan and Susan E. Rice, the former national security adviser. But in the eyes of Mr. Biden and his advisers, Ms. Harris alone covered every one of their essential political needs.

Ms. Rice had sterling foreign-policy credentials and a history of working with Mr. Biden, but was inexperienced as a candidate. Ms. Warren had an enthusiastic following and became a trusted adviser to Mr. Biden on economic matters, but she represented neither generational nor racial diversity. Ms. Whitmer, a moderate, appealed to Mr. Biden’s political and ideological instincts, but selecting her also would have yielded an all-white ticket.

Other candidates rose and faded in the process: Senator Tammy Duckworth of Illinois powerfully impressed Mr. Biden’s search team, but his lawyers feared she would face challenges to her eligibility because of the circumstances of her birth overseas. Representative Karen Bass of California emerged as a favorite among elected officials and progressives — Speaker Nancy Pelosi spoke glowingly of her to Mr. Biden — but the relationship-focused Mr. Biden barely knew her.

In the end, Mr. Biden embraced Ms. Harris as a partner for reasons that were both pragmatic and personal — a sign of how the former vice president, who is oriented toward seeking consensus and building broad coalitions, might be expected to govern. Indeed, Mr. Biden has already told allies he hopes a number of the other vice-presidential contenders will join his administration in other roles.”

This article is well-done and provides good insight into Biden’s selection process.