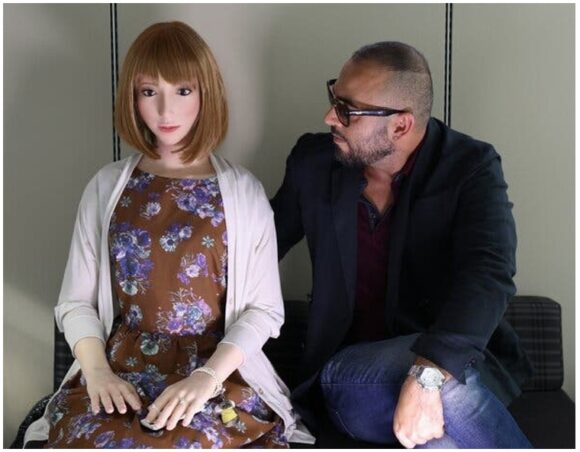 The producer Sam Khoze with Erica, the android star of the film “b.”

Matthew Helderman, the chief executive of BondIt Media Capital, was meeting with the leading lady of “b,” a $70 million film his company is backing.

Only the actress, Erica, was not, in fact, a woman but an android.

Erica was created by Hiroshi Ishiguro, a roboticist at Osaka University in Japan, to be “the most beautiful woman in the world” — he modeled her after images of Miss Universe pageant finalists — and the most humanlike robot in existence. But she’s more than just a pretty face: Though “b” is still in preproduction, when she makes her debut, producers believe it will be the first time a film has relied on a fully autonomous artificially intelligent actor.

Yet despite her flawless features and easy smile, her pupils are clearly plastic. Her synthesized British voice has a slight metallic tone that sounds like she’s speaking into a pipe. When she walks, the motion of her air compressor joints makes it look as though she’s performing either a sped-up or slowed-down version of the robot. For that reason, a majority of her scenes will be filmed while she’s sitting down.  As reported by the New York Times.

“Hiroshi Ishiguro has a dream, and in it, the world is filled with Ericas.

The barista who hands you your morning coffee. The anchor who delivers the nightly news. The receptionist at the doctor’s office.

He can make artificially intelligent androids that walk and talk, of course. But he’d rather you forget they aren’t human.

To that end, his goal is to understand what makes humans, well, human. “Erica does not understand or operate in the same system as humans,” the 56-year-old director of the Intelligent Robotics Laboratory at Osaka University said by email. “So she always makes believe to be human.”

Ishiguro developed Erica with the goal of creating an android that people wouldn’t just relate to, but also confide in and feel affection for. The more humanlike he could make her appear, he said, the more people would trust her.

When he unveiled her in 2015, she was the most advanced of the dozens of androids he had produced over his career that have performed in plays, sung in malls and even delivered the news.

So when one of the “b’s” producers, Sam Khoze of LIFE Productions, was looking for an android to headline a feature film in 2017, he entertained pitches from several robotics companies. But the moment he met Erica, Khoze said he knew she was their star.

“She really looks like a human,” Khoze said. “Even down to such small details as her tongue and eyelids.”

When Khoze pitched the project to Helderman and BondIt Media Capital, about two years ago, its android actor was unquestionably the selling point.

Helderman, whose company’s credits include the 2017 Netflix movie “To the Bone,” said the film had a dime-a-dozen sci-fi plot that wouldn’t have made it on his radar if it hadn’t been for the star. (In addition to BondIt, the Belgium-based Happy Moon Productions has also committed to back the film.) But video calls with Ishiguro and Kohei Ogawa, an assistant professor at Osaka University who had joined the Erica project in 2016, convinced Helderman that the project was more than slush-pile material.

In the story, which was written by Khoze, Eric Pham, the visual effects supervisor, and Tarek Zohdy, Erica plays an artificially intelligent woman, b, who can surge into the body and mind of any human host. The film follows her creators’ efforts to gain control of her as she becomes self-aware.

Erica had originally been set to star in a project directed by Tony Kaye (“American History X”), but scheduling issues led the producers to abandon it. No director or human co-stars are attached to “b” yet (Khoze said they have interviewed several filmmakers and will make their choice in the next few weeks), but some of Erica’s scenes were filmed in Japan last year. They hope to finish the rest in Europe next summer.

But while she awaits her human counterparts, Erica is rehearsing. There’s just one problem: She has no emotional memories.

Helderman said that when he initially met her, Erica’s acting chops were nonexistent. “At first, she didn’t understand what acting was,” Helderman said. “It was like teaching a child why we respond the ways we do.”

The team taught her how to perform over more than two years of daily sessions using what Helderman calls a “Marlon Brando” method. Some stars might draw on their own experiences to create a character, but they instructed Erica to emulate other actors’ performances. Actors explained out loud how they were feeling in each scene to Erica.

“She’d ask questions like, ‘Why am I saying this line more loudly or more softly?’” Helderman said. “Or, ‘Why am I doing this thing when the camera is there, but not when it isn’t?’”

Their biggest challenge, he said, was hardly memorization — she immediately mastered her lines. But it took her months to grasp the concept of not just reciting a line, but speaking it softly or in full voice depending on the context, and bolstering the words with body language. Khoze said they taught her the dialogue for a scene in one session, then worked on the emotions, character development and body language in another.

Of course, there are limits to her capabilities: She cannot improvise. Well, she can, within limits, Helderman clarifies, it just wouldn’t be nearly as clean a performance as a practiced sequence.

And unlike a human actor, she’ll have to convince the audience not to reject her as creepy or repulsive.

The Japanese roboticist Masahiro Mori proposed a theory in 1970 known as the “uncanny valley,” which says that the more humanlike a robot appears, the more positively humans will react to it — but only to a point. If the resemblance is too strong, the robot can trigger a sense of revulsion or eeriness. It’s still unclear exactly what triggers the uncanny valley, said Karl MacDorman, an associate professor of human-computer interaction at Indiana University-Purdue University Indianapolis: factors might include facial and body proportions, the pace and naturalness of speech, and the fluidity or jerkiness of movement.

He said that lack of sympathy in the face of adversity can be a plus for uncanny computer-animated or robotic villains like Gollum from “Lord of the Rings,” using viewers’ unsettledness to their advantage. “You’re not supposed to relate to or feel empathy for Gollum — though sometimes, we do,” he said. “But when we can’t relate to a protagonist we’re supposed to want to succeed, that’s where the uncanny valley can become disruptive.”

While she awaits co-stars, Helderman said, Erica continues to run lines with amateur local actors. “The coronavirus is a double-edged sword,” he said. “We don’t know when production can begin again, but she’ll be ready when it does.”

The script calls for three supporting human lead actors, but Khoze said they’re also looking at several other robots for supporting roles and are in negotiations to hire a robot for a crew position.

But Erica still has a way to go in the quest to not just masquerade as humans, but to emulate them. She speaks both English and Japanese, and can talk to a stranger in Japanese for 10 minutes on more than 80 topics. But Ishiguro said they’re still working toward conversations that are deeper or involve multiple people.

“The machines that humans use become more human,” he said. “So the most important question for us is, ‘What is a human being?’