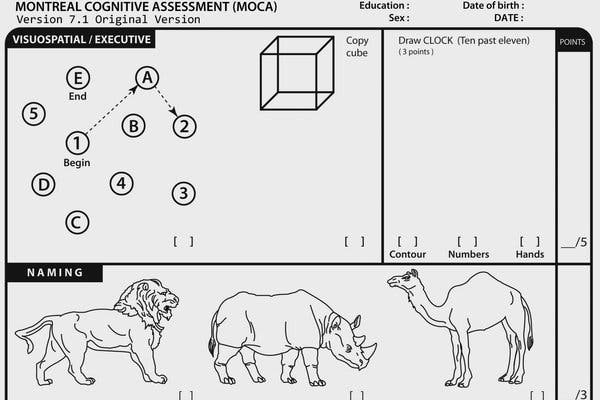 “Person. Woman. Man. Camera. TV.”  Donald Trump said in a Fox News interview that he had to remember those words as part of a test that he said demonstrated his “mental acuity.”  During the interview, he repeated the words about six times. But the test, the Montreal Cognitive Assessment, is meant to detect signs of dementia, Alzheimer’s disease or other conditions. Cable news had a field day on Trump’s interview and his mental acuity.  Here is reporting courtesy of the New York Times.

“Presidents and those who would be president often boast of their qualifications — their education, their experience, their achievements. And then there is President Trump, who is boasting about his dementia test.

Even for a president who has rewritten the political rule book so many times before, the spectacle of a commander in chief repeatedly touting his performance on a cognitive examination to prove that he has not lost a step paves new ground in the history of campaigns for the highest office in the land.

Rather than dispensing with the issue, Mr. Trump drew new ridicule this week when he declared it nothing short of “amazing” that he did so well on a test that, among other things, required him to identify an elephant. To demonstrate just how hard he said the test really was, he went on television to recite, over and over, the words that he had been asked to remember in the right order: “Person. Woman. Man. Camera. TV.”

Cable television played the president’s performance on a virtual loop on Thursday, and those five words trended online. A group of anti-Trump Republicans instantly produced an online ad mocking the president. T-shirts, sweatshirts, hoodies and other clothing with “Person. Woman. Man. Camera. TV.” emblazoned on them were quickly offered for sale. They have in effect become the haiku of the 2020 campaign.

The reaction was not quite what the president was seeking. In repeatedly bringing up his cognitive test in recent weeks, he has been trying to bolster his strategy of questioning the mental acuity of his presumptive Democratic presidential opponent, former Vice President Joseph R. Biden Jr., whom he has portrayed as a doddering old man propped up by his staff.

But in doing so, the president who has called himself a “very stable genius” reinforced concerns about his own capacity, leaving voters who are already confronting the oldest matchup of presidential candidates in American history to decide which septuagenarian is still with it — Mr. Trump at 74 or Mr. Biden at 77.

Mr. Biden has sought to fend off questions about his state of mind for months, going back to the primary campaign when fellow Democrats pointed to gaffes, misstatements and stumbles over words. At one debate, an opponent jabbed him by suggesting he could not remember something he had said only two minutes earlier.

Mr. Biden’s camp was happy to jump on Thursday on the president’s latest comments. Kate Bedingfield, Mr. Biden’s deputy campaign manager, pointed out that Mr. Trump recently suggested injecting disinfectant to counter the coronavirus and he has been reported to once ask aides about using nuclear weapons to disrupt hurricanes.

“He has shunned the advice of doctors, medical experts and scientists throughout the pandemic and promised that the virus will magically ‘disappear,’” she said. “His erratic and unstable leadership has given Americans tremendous doubts about his fitness to hold the office before you even get to him continually and pointedly raising doubts about his own cognitive ability.”

Mr. Biden has the edge upstairs in the view of the public. In a poll by The Hill newspaper with the HarrisX research firm released this week, 56 percent of voters said the former vice president was mentally fit to lead the nation, while just 45 percent said that of Mr. Trump.

Other American presidents have struggled with cognitive or psychological issues but rarely addressed them publicly the way Mr. Trump has. A Duke University study in 2006 found that nearly half of presidents suffered from mental illness at some point in their lives. Nearly 25 percent of presidents met the criteria for depression, according to the study, including James Madison, Abraham Lincoln and Calvin Coolidge. Ronald Reagan’s aides were concerned enough that he was slipping late in his presidency that they secretly considered whether to invoke the 25th Amendment to remove him for incapacity before deciding he was still fit enough to finish his tenure.

Mr. Trump has been unclear about when he took the cognitive test he has recently been eager to discuss. Dr. Ronny L. Jackson, who was then his White House physician, reported in 2018 that the president had taken the Montreal Cognitive Assessment, or MOCA, and scored a perfect 30 points. Lately, Mr. Trump has said he took a test “a little less than a year ago,” but White House officials would not clarify whether he took a second test or was referring imprecisely to the one Dr. Jackson reported two years ago.

In unscripted moments before the camera, the president sometimes wanders from topic to topic without completing a train of thought, repeats himself or falls back on the same familiar phrases when questioned. He makes statements that defy common sense, like insisting that if there were not so many coronavirus tests conducted, there would not be so many cases of the virus, which as skeptics have pointed out is roughly equivalent to saying that there would not be as many pregnancies if there were not as many pregnancy tests administered.

The Montreal Cognitive Assessment is meant to test for signs of dementia, Alzheimer’s disease or other conditions, but the president talked about it on Fox News on Wednesday night as if he had aced an IQ test proving his intelligence. Experts said that reflected a misunderstanding about the purpose and value of the exam.

“It is good that he has a good score, and it’s very good that he has a higher than average score, so this is reassuring in terms of cognitive dysfunction,” Dr. Ziad Nasreddine, the neurologist who created the test, said in an interview. “It obviously does not measure whether a person is fit to be president.”