Joe Biden’s advisers have conducted several rounds of interviews with a select group of vice-presidential candidates and are beginning to gather private documents from some of them, as they attempt to winnow a field that features the most diverse set of vice-presidential contenders in history. Biden has committed to having a woman on the ticket with him.  The search committee has been in touch with roughly a dozen women, and some eight or nine are already being vetted more intensively.

Among that group are two contenders who have recently grown in prominence, Representative Val Demings of Florida and Mayor Keisha Lance Bottoms of Atlanta. One well-known candidate, Senator Amy Klobuchar of Minnesota, has lost her perch as a front-runner. And some lower-profile candidates, like Senator Tammy Baldwin of Wisconsin, are advancing steadily in the search process. 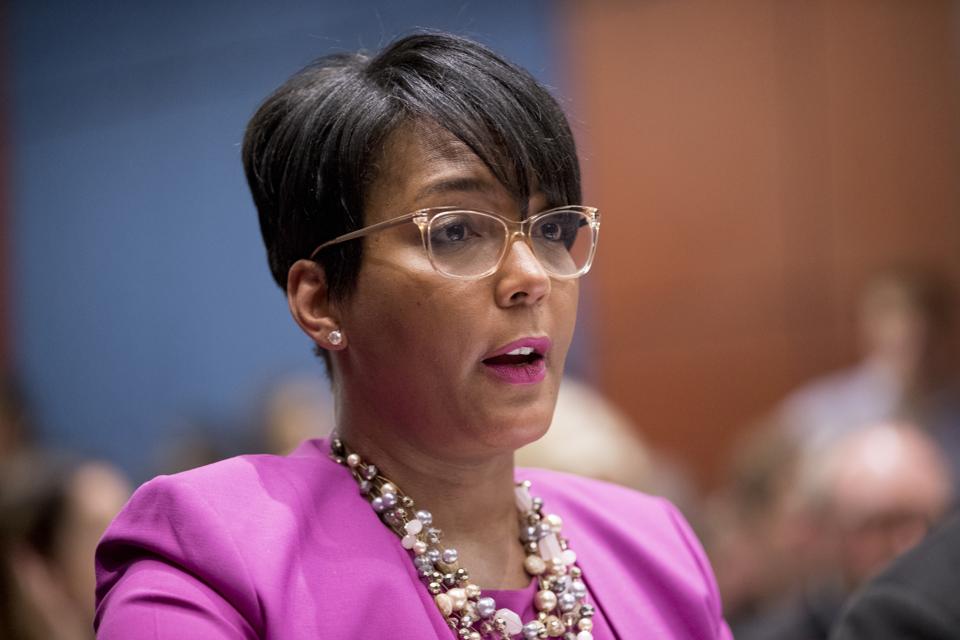 The New York Times spoke to an array of people who are familiar with the vice-presidential search and the activities of the Biden team, and the interviews yielded the fullest picture yet of the list of candidates Mr. Biden is considering, who is advancing and who may be fading, and the dynamics at play. Here is the Times analysis.

Mr. Biden’s vice-presidential search has taken a bifurcated course so far, with one path unfolding in the open — joint appearances on television or in virtual events with potential running mates — and another in an environment of strict discretion. People involved in the confidential part described it on condition of anonymity, because they were not authorized to discuss a process that is designed to shield Mr. Biden’s thinking and the participants’ privacy.

Some of the contenders who have advanced furthest in the process are well known, including Senators Kamala Harris of California and Elizabeth Warren of Massachusetts. But The Times confirmed that several other women — whose names have been repeatedly floated but who have not publicly confirmed that they agreed to be vetted for the job — are under active consideration as well.

Ms. Harris and Ms. Warren have been interviewed at length by Mr. Biden’s team, as has Ms. Baldwin, who was the first openly gay candidate ever elected to the Senate.

Two women with distinctive national-defense credentials have also been interviewed and asked for documents: Senator Tammy Duckworth of Illinois, an Iraq war combat veteran who is Asian-American, and Susan Rice, the former national security adviser to President Barack Obama and the first black woman to serve as ambassador to the United Nations.

As the vetting process advances to a newly intense phase, the political currents of the last few weeks are also leaving a mark on the Biden team’s deliberations. The wave of demonstrations touched off by the killing in Minneapolis of George Floyd, a black man, at the hands of a white police officer there, has elevated a pair of black women long regarded as intriguing long-shot candidates: Ms. Demings and Ms. Bottoms.

Though Ms. Demings and Ms. Bottoms are far less known to the national electorate than other figures on Mr. Biden’s list, they have played crucial roles in a cascading civil rights crisis: Ms. Demings, a former police chief in Orlando, Fla., has become a major figure in the law-enforcement debate, while Ms. Bottoms’s handling of chaotic demonstrations in her city earned her national acclaim.

Both women have spoken with the vetting team, and Biden advisers have reached out to their allies to seek information about them.

Representative Charlie Crist of Florida, a supporter of Ms. Demings, said he had recently spoken about her with former Senator Christopher J. Dodd, a member of Mr. Biden’s search committee. Mr. Crist — a former Republican who was vetted for vice president by John McCain in 2008 — predicted that if Mr. Biden made Ms. Demings his running mate, it would lock down Florida and its 29 Electoral College votes.

“She is ready for the task,” Mr. Crist said of Ms. Demings, adding, “It would make a huge difference if you actually had a Floridian on the ticket.”

Mr. Biden insisted in an interview with CBS this past week that the last few tumultuous weeks had not meaningfully changed his thinking about the vice presidency, except to put “greater focus and urgency on the need to get someone who is totally simpatico with where I am.”

“I want someone strong,” he said, “and someone who is ready to be president on Day 1.”

Representative Dina Titus of Nevada, a prominent early supporter of Mr. Biden, counseled him to not be caught up in a momentary news cycle but rather make a sober-minded governing choice, someone to help him steer through turbulent years ahead.

Several state executives have also had conversations with members of the vetting team, including Gov. Gretchen Whitmer of Michigan, who clashed with President Trump over his handling of the coronavirus, and Gov. Gina Raimondo of Rhode Island, a leader of her party’s centrist wing. Gov. Michelle Lujan Grisham of New Mexico, a former chair of the Congressional Hispanic Caucus, is one of the candidates from whom Biden advisers have requested private documents, a signal that she is regarded as a serious contender.

It is not clear precisely where Stacey Abrams, the former Georgia candidate for governor, stands in the process. In an appearance Wednesday on Stephen Colbert’s CBS show, Ms. Abrams appeared to say she had not been contacted by the search committee, though several people insisted she was still in the mix.

Ms. Harris, who was already a leading prospect, appears to have lifted herself further in recent weeks with her advocacy for policing reform. But three Democrats in regular contact with top Biden officials said they still frequently expressed unease about Ms. Harris because of her rocky turn as a presidential candidate and her blistering attack on Mr. Biden in the first debate last year.

Ms. Klobuchar is also still under consideration, but she has receded amid criticism that she did not take on police misconduct as a district attorney in Hennepin County, home to Minneapolis. That may leave Ms. Warren as the most formidable white candidate in the running, in large part because of her popularity with liberals and her credibility as a messenger on the economy.

Mr. Biden’s decision has taken on outsize importance as the country faces an overlapping set of crises that are all but certain to last beyond Inauguration Day.

At 77, Mr. Biden would be the oldest person ever elected to the White House, a distinction with actuarial implications that cannot be discounted. A moderate white man in a party fueled by the political energy of women, young liberals and people of color, Mr. Biden is facing demands from numerous quarters to complete his ticket with someone who represents racial, geographic, generational or ideological balance — imperatives that no one running mate could satisfy in full.

If Mr. Biden wins the November election, he might well take office under the darkest conditions of any president in half a century, with economic stagnation and a deadly pandemic shadowing his new administration.

That unsettling reality has bolstered the view among many Democrats that Mr. Biden must choose a running mate who could be a full partner in governing rather than someone who is useful chiefly for tactical purposes in an election season.

The selection process by now has become so delicate that some of Mr. Biden’s senior aides are stepping gingerly. Steve Ricchetti, one of Mr. Biden’s closest advisers, has told people he is trying to avoid contact with any of the prospects because he does not want to be seen as tipping his hand.

The fact that someone has been interviewed for vice president does not necessarily mean she is among the top candidates, and it is somewhat customary for presidential candidates to put a few close allies on their short list as a kind of reward for their support. People briefed on the search also said it would be premature to assume anyone has been eliminated as a candidate simply because she may not have moved as far in the process as others.

Jennifer Palmieri, who advised Hillary Clinton during her 2016 hunt for a running mate, said it made sense for the search committee to screen a large number of candidates to give Mr. Biden flexibility in his decision. The search, she said, should function “outside of the day-to-day political ecosystem” that thrives on fleeting conventional wisdom.

“Their job is to give Biden as many qualified options as possible,” Ms. Palmieri said. “Somebody who does not make a lot of sense in June can make a great pick on Aug. 1.”

The search process has been carried out by a selection committee staffed by a team of lawyers and led by four close allies of Mr. Biden: Mr. Dodd, Representative Lisa Blunt Rochester of Delaware, Mayor Eric Garcetti of Los Angeles and Cynthia Hogan, Mr. Biden’s counsel when he was vice president himself.

The process has unfolded in several stages, according to people familiar with the search. In April and May, advisers to Mr. Biden contacted more than a dozen Democratic women to ask whether they would be willing to be vetted for the vice presidency. Nearly everyone approached answered in the affirmative; a notable exception was Senator Jeanne Shaheen of New Hampshire, who is running for re-election this year and declined to join a time-consuming vetting process that she believed was highly unlikely to end in her selection.

A second senator, Catherine Cortez Masto of Nevada, did not immediately rebuff the Biden team but removed herself from consideration late last month. Senator Maggie Hassan of New Hampshire also agreed to be vetted, but she has not been actively pursuing the job and is not seen as a major candidate.

For those who agreed to move ahead, the next step was interviewing with members of Mr. Biden’s screening committee. Those sessions involved a range of broad questions concerning the role of the vice presidency and the policy challenges facing a potential Biden administration, as well as aspects of the candidates’ public records.

Only in recent days has the process moved toward more intrusive scrutiny of the candidates’ sensitive private matters.

That stage of the process may be especially important for candidates like Ms. Bottoms and Ms. Demings, who have not undergone the kind of public examination that other women, like Ms. Harris and Ms. Warren, endured as presidential candidates.

While Ms. Demings could help Mr. Biden in Florida, a similar argument could apply to Ms. Bottoms, given Georgia’s status as an emerging political battleground. As mayor, she has managed the coronavirus response in the Southern metropolis and has regularly criticized Mr. Trump’s rhetoric about reopening states.

Some of Ms. Bottoms’s fellow city leaders are enthusiastic about the idea of a mayor on the ticket. “She’d be strong and is very popular amongst her colleagues,” said Mayor Steve Benjamin of Columbia, S.C.

Mr. Benjamin, a former president of the U.S. Conference of Mayors, said he had shared his high opinion of Ms. Bottoms with the Biden camp.

Biden’s decision here is critical.  I think it would be best if he selected a minority woman who could bring in a swing state.