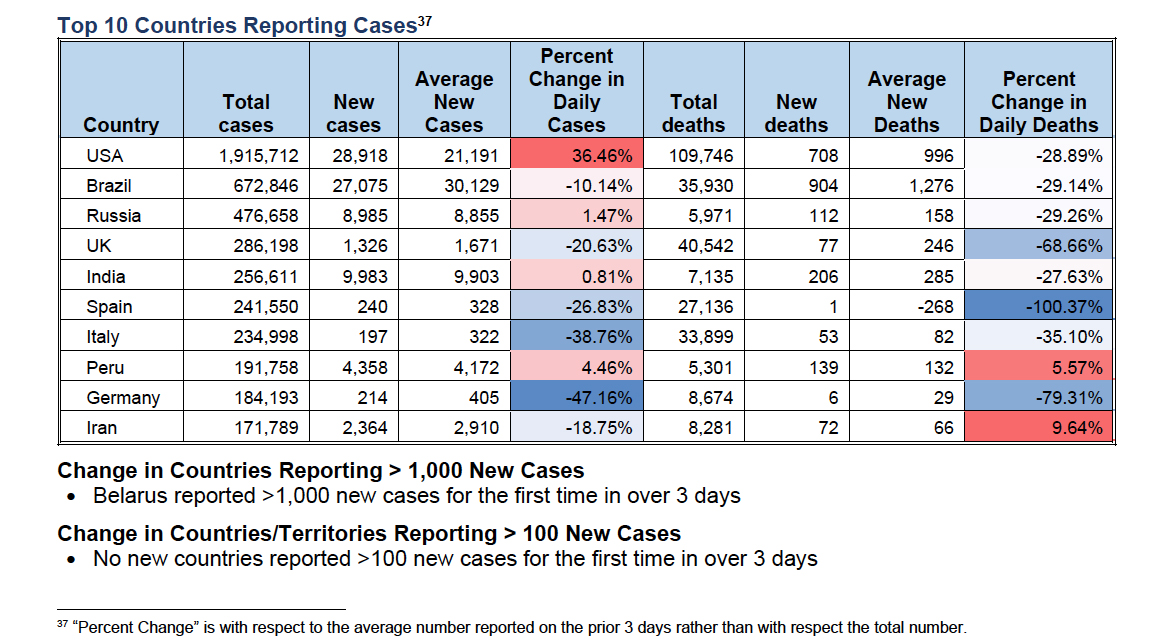 Dr. Ashish Jha, Director of the Harvard Global Health Institute, in interview with CNN and USA Today, predicted that “”sometime in September, we’re going to cross 200,000 deaths, and we still won’t be done…This pandemic is going to be with us until next spring or summer when we have a vaccine. This is not faded.”  Looking ahead to the rest of the summer, Jha explained that if the current number of coronavirus deaths per day in the U.S. — between 800 and 1,000 — stays the same, roughly 25,000 to 30,000 people will continue to die every month.

In sum, the United States is not out of the woods yet regarding the coronavirus pandemic. Below  is an article courtesy of USA Today on Jha’s interview.  Above is current data on the spread of coronavirus among the top ten countries in the world.  The United States has had by far the most cases and most deaths.

With more states easing restrictions after the coronavirus lockdown, the U.S. recently surpassed 2 million cases of COVID-19, prompting public health experts to worry about a second wave of the virus.

In 21 states, cases spiked over the past week, NBC News’ Erin McLaughlin reported. New Mexico and Florida have seen a 40% increase, and in Utah and Arkansas, which never instituted statewide stay-at-home orders, cases are up 60%. Officials in Arizona, where cases have risen 93%, have urged hospitals to activate their emergency plans.

In light of the new numbers, the nation’s top infectious disease expert, Dr. Anthony Fauci, called the coronavirus pandemic his “worst nightmare … Like oh, my goodness, when is it going to end?” he said. “It really is very complicated. So we’re just at almost the beginning of really understanding.”

While some people, including Arizona Gov. Doug Ducey, have speculated that these growing numbers are due to more widespread testing, Dr. Ashish Jha, director of the Harvard Global Health Institute, told TODAY on Thursday that this theory doesn’t explain the rise in hospitalizations in at least nine states.

“That’s coming from just more people getting sick and needing hospital care,” he said. “We’ve been so behind in our testing approach for months that we were missing most of the cases out there … As testing’s gotten better, we’ve identified more cases. Testing is a part of the story but certainly doesn’t explain the whole thing.”

The “concerning” numbers, as Jha described them, come about two weeks after Memorial Day, “and this is what we’re worried about,” he said. “I’d hoped that (because) people are spending more time outside … that we would not see such a big increase so fast, but it’s more concerning than I’d hoped.”

Asked whether nationwide protests over police brutality and racial injustice are contributing to these increases, Jha said he thinks they’re “going to fuel more cases” and stressed the importance of protestors wearing masks.

“I’ve seen some protests where most people are wearing masks, others where they’re not,” he said. “It’s really critical that people wear masks because we think, as the data’s coming in, that can really help a lot.”

Looking ahead to the rest of the summer, Jha explained that if the current number of coronavirus deaths per day in the U.S. — between 800 and 1,000 — stays the same, roughly 25,000 to 30,000 people will continue to die every month.

Because the current total of U.S. coronavirus deaths is around 113,000, that means “sometime in September, we’re going to cross 200,000, and we still won’t be done,” Jha said. “This pandemic is going to be with us until next spring or summer when we have a vaccine. This is not faded.”

He continued: “We don’t have to live with hundreds of thousands of Americans dying. We do have to get people to wear masks. We do have to do as much social distancing as possible. And while we’ve gotten better on testing, we’re nowhere near where we need to be … We really need the federal government to step in and decide that it doesn’t want to have hundreds of thousands of Americans dying and help states ramp up testing and tracing. That’s the other piece of this that’s still missing.”

Addressing the possibility of another lockdown, he said, “The longer we wait, the harder it is to avoid … We basically ignored the virus for all of February and a good chunk of March, and then we had to shut down. My point is, let’s not do that again.”

“Let’s do everything in our power to get the virus under control,” he continued. “I think we can, we absolutely can. I don’t want a lockdown. Nobody does.”

The key, though, is to be “proactive,” Jha said. “If we just act like the virus isn’t there … we’re going to be confronting a much uglier reality, and I don’t want to do that.”