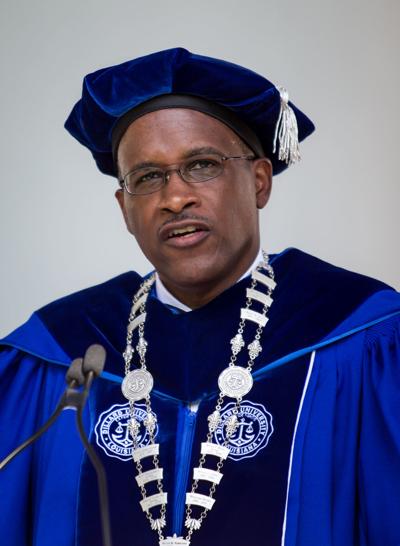 Walter Kimbrough, the president of Dillard University in Louisiana, has an op-ed in The Chronicle of Higher Education today that asks:  How do you reopen an HBCU when your main demographic is the one disproportionately affected by Covid-19?  It is a heart-wrenching decision.  He concludes that he only has questions and not answers.  Below is his entire op-ed.

“A Fall Unlike Any I Have Seen”

There’s a hip-hop song I like, “The Questions,” by Common, featuring Mos Def. It is a conversation between them (with commentary by Monie Love) as they ponder a range of topics. Mos Def asks my own favorite: “Why do I need I.D. to get I.D.? If I had I.D. I wouldn’t need I.D.”

I can’t think of a better framework than “The Questions” to capture what the world has experienced in 2020. The coronavirus has given us many more questions than answers. We didn’t anticipate it, had never seen it before, and because of it have had to do the unthinkable — shut down practically everything since March.

In the world of higher education, that has meant quickly moving all instruction online. For some institutions, the shift has been more disruptive and financially straining than for others. With the traditional academic year now ending, institutions are calculating losses, mostly from room and board, and trying to answer the crucial question: Will we reopen in the fall — and in what form?

As usual, much of the focus has been on the Ivies and big, brand-name institutions. But the questions about opening this fall are much more complicated for mission-driven colleges — those that are church-related, single-sex, and minority-serving. These colleges, many of which operate on the slimmest of financial margins, face a complicated calculus when determining their plans. For many, not reopening the campus this fall amounts to an institutional death sentence.

So if I, a president of a church-related, historically black university, were joining Common and Mos Def in a discussion, here would be a few of my questions.

Will the actions of wealthy universities and flagships make the decisions for us? If you are a small college located near an institution with financial means that decides to open its physical campus this fall, can you afford not to open and risk losing students who want to be in college?

One of the things we’ve learned about online learning this spring is that many students don’t like it. Traditional students have overwhelmingly made clear that they prefer the brick-and-mortar educational experience, in which schedules are set, they can see professors in person both inside and outside of class, and they have more opportunities to engage with other students. These students want to get out of the family home (and for some moms and dads, I am sure, the feeling is mutual). For many, higher education is still the best halfway house in America.

But how do you open when your main demographic is the one disproportionately impacted by Covid-19? Studies have shown that black and low-income people are at the greatest risk of contracting the virus and of dying as a result. That profile makes up more than two-thirds of HBCU students. And even if young people are less at risk of getting sick themselves from Covid-19, they can still be carriers. HBCUs have to think not just about the safety of their students but also about that of their families and communities.

Black and low-income families also have been hit the hardest economically. So if HBCU families are able to avoid a physical illness, they might not escape financial distress. That, too, could limit enrollments this fall.

Students, though, will have a hunger for college, especially since the recession will mean limited job opportunities for those with only a high-school education or some college. Those students will be ripe for poaching by colleges that do open. Since the federal government gave its blessing to a system in which students can be recruited essentially forever, students enrolled in a college that remains on hiatus will be prime targets. Community colleges and online universities are already aggressively recruiting a wider range of students.

Another question: Is it time for a new era of mergers? Many HBCUs saw mergers in the early 1900s. Dillard University, for example, was formed by the merger of two colleges in 1930. Huston-Tillotson and Bethune-Cookman are merger examples, and Philander Smith received the assets of a small HBCU in Missouri that closed after burning down in 1925. More recently the University System of Georgia merged Darton State College into Albany State University.

Mergers are easier for fledgling institutions, or for neighboring undergraduate and graduate institutions like Clark College and Atlanta University, which became Clark Atlanta University. But today most alums won’t hear of it, even if it means continuing the college as a shell of itself. Recent discussions to even consider mergers — in Georgia legislation or in an editorial by the president of the Thurgood Marshall College Fund — have been widely rejected.

Maybe the coronavirus has changed that. Maybe not.

Finally, what if none of the decisions about opening are in our hands? Rules, such as stay-at-home restrictions, vary not just from state to state but within states, by county or city. People are tired of staying at home and now are venturing back out, creating consequent risks, with potentially new outbreaks of Covid-19. Colleges in those areas might be under harsher restrictions, preventing them from reopening their campuses. They may be forced to stay online even when that is not what they do best.

Mos Def asks in the song, “How come [people] don’t know but they front and don’t ask?” Most higher-education leaders haven’t had that problem. They’ve swarmed to webinars and email lists to find answers to the coronavirus questions. I find myself thinking over and over about new scenarios, planning for a fall unlike any I have seen in 16 years as a college president. Our controllable unknowns, like yield for freshman classes, have become a crapshoot. A new unknown has upended all the traditional models and the sophisticated analytics, which leaves me only with one thing. The questions.