Teacher Julie Rechtya conducts a lesson during the first day back to school in Geneva, Switzerland, May 11, 2020.

U.S. schools and colleges are trying to figure out whether and how to open next fall assuming the coronavirus is still with us.   While the U.S. debates when to bring children back into classrooms, phased-in re-openings have begun in a number of countries.  Reuters had a featured article yesterday describing how schools around the world are trying to protect students as they reopen. Below is an excerpt.

Denmark eased its coronavirus lockdown in mid-April by reopening schools and day care centres, although concerns they might become breeding grounds for a second wave of cases convinced thousands of parents to keep their children at home.

Teaching staff there are under instruction to keep social distancing in place between children and, with many school buildings staying closed, some teachers are taking pupils outside and writing with chalk on the playground instead of a blackboard.

Teacher Julie Rechtya conducts a lesson during the first day back to school in Geneva, Switzerland, May 11, 2020. REUTERS/Denis Balibouse

In Switzerland, children at Geneva’s La Tour School had to adapt to new rituals, with parents dropping them off at a distance. Classrooms were half full to reduce crowding and desks spaced two metres (6.5 feet) apart.

Under a courtyard shelter in heavy rain, children laughed while others played hopscotch and one girl helped a smaller child put on disposable gloves. 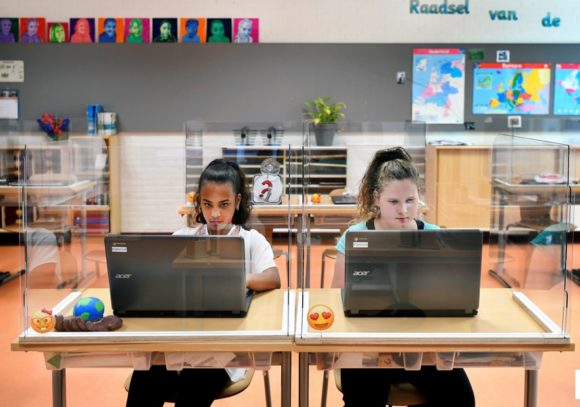 In the Netherlands, the Springplank school in the city of Den Bosch installed plastic shields around students’ desks and disinfectant gel dispensers at the doorways.

“Our teachers are not worried,” said Rascha van der Sluijs, the school’s technical coordinator. “We have flexible screens that we bought so we can protect our teachers if students are coughing.”

The Canadian province of Quebec reopened some of its schools on Monday, as some parents and teachers expressed uncertainty over the move’s safety. The Ecole St-Gerard, in a Montreal suburb, opened with staff wearing visors and using hand sanitizer.

Schools in Australia’s biggest state, New South Wales, reopened on Monday but only allowing students to attend one day a week on a staggered basis.

Australia’s second-most populous state, Victoria, will resume face-to-face teaching from May 27, weeks earlier than expected. The state including the city of Melbourne will allow teenagers in classrooms first, followed by younger pupils from June 9, Andrew said.

A girl waves to her father as she enters her elementary school in Sderot as it reopens in Israel May 3, 2020. REUTERS/Amir Cohen

Israel reopened some schools this month but the move was boycotted by several municipalities and many parents who cited poor government preparation.

Kitted with masks and hand-cleaners, the first three grades of elementary school and the last two grades of high school were allowed back, redistributed in classes capped at 15 pupils to enforce social distancing.

In Cyprus, health workers wearing personal protective equipment tested students for COVID-19 at a school in Nicosia after high schoolers were allowed to return beginning May 11.

Students wearing face masks use hand sanitisers at an entrance to a school in Shanghai, China, April 27, 2020. cnsphoto via REUTERS

In Shanghai, students and staff alike were required to enter the school building via a thermal scanner when school reopened last week after three months of lockdown. The walls are papered with posters on measures to tackle the coronavirus and in the spotlessly clean school canteen, glass walls divide the tables, so only two students can eat together.

It may be more like going to a hospital than a school, but the Shanghai students returning to class after three months of lockdown are thrilled to be there.

“I feel so excited coming back to school. Usually we look forward to the holidays but suddenly our holidays became so long, 17-year-old Zhang Jiayi told Reuters. “This time, we longed to go back to school, where we can see our friends and teachers.”