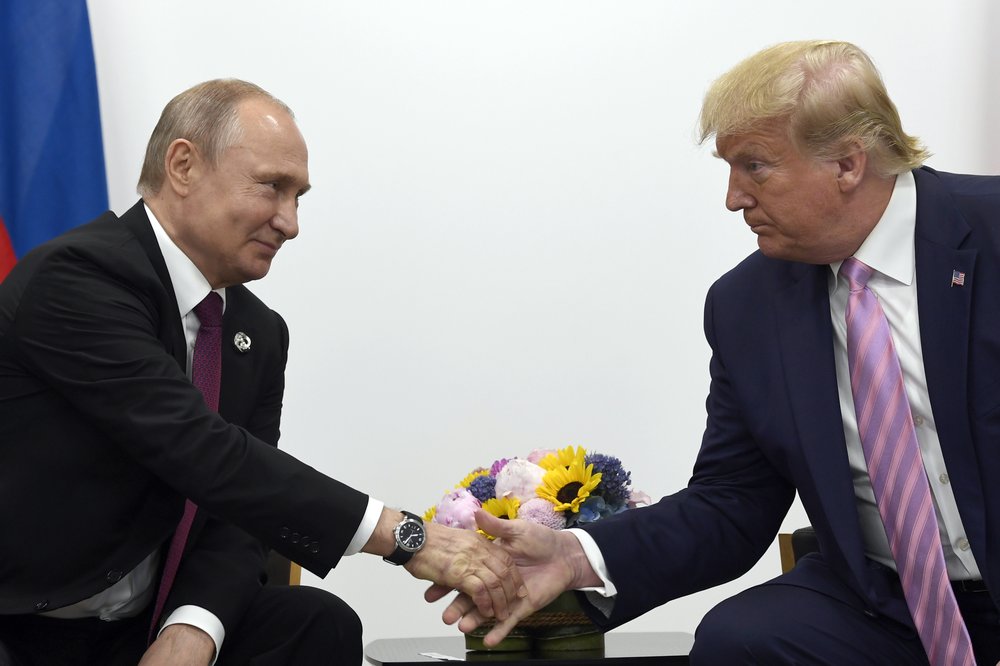 It has been an incredibly busy week on the political front:

The Associated Press recapped the Russian interference stories (see below).

We will have to wait and see how things go in Nevada!

2016 again? Russia back to stirring chaos in U.S. election

Just weeks into this year’s election cycle, Russia already is actively interfering in the U.S. presidential campaign in hopes of reelecting President Donald Trump, and is also trying to help the candidacy of Sen. Bernie Sanders on the Democratic side, intelligence officials have concluded.

The Russian efforts are aimed at undermining public confidence in the integrity of U.S. elections and stirring general chaos in American politics, intelligence experts say.

Lawmakers were told in a classified briefing last week that Russia is taking steps that would help Trump, according to officials familiar with the briefing. And Sanders acknowledged Friday that he was briefed l ast month by U.S. officials about Russian efforts to boost his candidacy.

The revelations demonstrate that the specter of foreign interference in the 2020 presidential election will almost certainly be a cloud over the campaign, and possibly even the final results if the contest is close. Democrats have consistently criticized Trump for not doing more to deter the Russians and others, and now they have fresh evidence to support their concerns.

There were some conflicting accounts about what the briefers had revealed about Russia’s intentions. One intelligence official said that members were not told in the briefing that Russia was working to directly aid Trump. But advancing Sanders’ candidacy could be seen as beneficial to Trump’s reelection prospects.

“That Russia would put its national intelligence apparatus in an operational mode to enhance Sanders and attack (Joe) Biden and others is only natural,” said Malcolm Nance, a veteran intelligence officer who wrote a book on meddling in the 2016 presidential election. “A damaged Sanders or one who would lose at a brokered convention would … assure another Trump victory.”

“I don’t care, frankly, who Putin wants to be president,” Sanders said. “My message to Putin is clear: Stay out of American elections, and as president I will make sure that you do.”

Trump, acknowledging nothing, took a different tack in responding to news that the House Intelligence Committee earlier this month had been briefed by U.S. intelligence experts that Russia was attempting to ensure his reelection.

On Friday he sought to minimize the new warnings by his government intelligence experts and revived old grievances in claiming any problem was just Democrats trying to undermine the legitimacy of his presidency.

The president started the day on Twitter, claiming that Democrats were pushing a “misinformation campaign” in hopes of politically damaging him.

Later, making light of the intelligence findings at a campaign rally in Las Vegas, he suggested that Russia might actually prefer Sanders in the White House.

A senior intelligence official with knowledge about the briefing said the handful of U.S. election security briefers did not tell Intelligence Committee members in so many words that Russia was “aiding the re-election of President Trump.”

The official, who spoke on condition of anonymity to discuss the classified briefing, said the briefers covered election threats from Russia, China, Iran, non-state actors, hacktivists and ransomware, but that both Democrats and Republicans homed in on Russia’s activities. The official said some of the lawmakers reached conclusions that had not been made by the briefers.

The fresh warnings about Russian interference came in what has been a tumultuous stretch for the intelligence community.

A day after the Feb. 13 briefing to the House Intelligence Committee, Trump berated the acting Director of National Intelligence Joseph Maguire in a meeting at the White House. Then this week, Trump abruptly announced that Maguire would be replaced by Richard Grenell, a Trump loyalist who also will hold the job in an acting capacity.

In addition to Maguire, two other senior officials will soon leave the agency.

Andrew Hallman, one of Maguire’s top deputies, announced Friday he would leaving. He is expected to return to the CIA, where he has spent more than 30 years, according to an official familiar with the move, who spoke on condition of anonymity to discuss the personnel move. Jason Klitenic, the general counsel for the national intelligence director’s office, is returning to private practice. Klitenic’s departure is unrelated to the sudden shakeup by Trump.

Former CIA Director John Brennan told MSNBC’s “Morning Joe” on Friday that Trump’s ouster of Maguire and Hallman was a “virtual decapitation of the intelligence community.”

Like Trump, Sanders appeared to suggest there was a political motive to the revelations about Russian interference. Nevada Democrats are to hold their nominating contest on Saturday.

“One day before the Nevada caucus, why do you think it came out?” he said.

Trump erupted when he learned last week about the briefing to House members, according to a senior administration official familiar with the matter. It was unclear whether he was aware of the specific information briefed, but he was agitated that contents of the briefing could be politically damaging to him, said the official, who spoke on condition of anonymity to dicuss sensitive matters.

Trump tweeted Friday that he was considering four candidates to serve as permanent intelligence director and said he expected to make a decision within the next few weeks. He told reporters Thursday evening that Rep. Doug Collins of Georgia was among those he’s considering.

But Collins, who is vying for one of Georgia’s Senate seats, said Friday he’s not interested in the job overseeing the nation’s 17 spy agencies.

The installation of Grenell, even in a temporary role, has raised questions among critics about whether Trump is more interested in having a loyalist than someone steeped in the complicated inner workings of international intelligence.

Grenell has a background that is primarily in politics and media affairs. Most recently, he’s been serving as Trump’s ambassador to Germany.

The Democratic chairman of the House Homeland Security Committee, Bennie Thompson of Mississippi, dismissed Grenell as someone who, “by all accounts, rose to prominence in the Trump administration because of his personal devotion to Donald Trump and penchant for trolling the President’s perceived enemies on Twitter.”

From the start of his presidency three years ago, Trump has been dogged by insecurity over his loss of the popular vote in the general election and a persistent frustration that the legitimacy of his presidency is being challenged by Democrats and the media, aides and associates say. He’s also aggressively played down U.S. findings that Russia interfered in the 2016 election.

In addition to those findings by the major intelligence agencies, a nearly two-year investigation led by special counsel Robert Mueller concluded there was a sophisticated, Kremlin-led operation to sow division in the U.S. and upend the 2016 election by using cyberattacks and social media as weapons.

Russia also took steps to support Sanders in the 2016 presidential campaign, according to a criminal indictment against a Russian troll farm and Mueller’s lengthy report.

Organizers of that Russian effort circulated an outline of themes for future social media content, with instructions to “use any opportunity to criticize Hillary and the rest (except Sanders and Trump—we support them),” according to the indictment.

Moscow has denied any meddling. Kremlin spokesman Dmitry Peskov said Friday that the newest allegations are “paranoid reports that, unfortunately, there will be more and more of as we get closer to the elections (in the U.S.). Of course, they have nothing to do with the truth.”