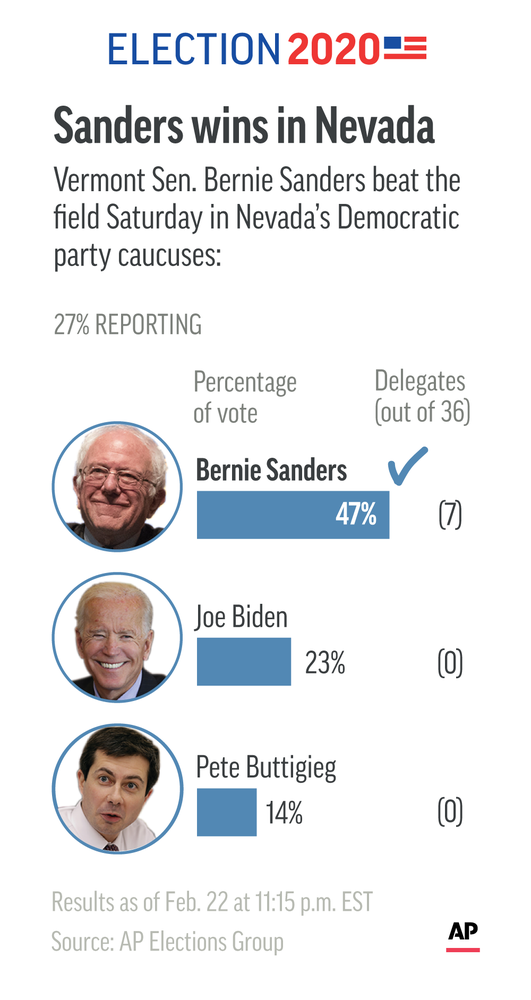 Bernie Sanders scored a major victory in Nevada’s presidential caucuses yesterday, and cemented his status as the Democrats’ front-runner for the presidential nomination.

Joe Biden was in second place followed by Pete Buttigieg and Elizabeth Warren.   As reported by the Associated Press.

“Nevada’s caucuses were the first chance for White House hopefuls to demonstrate appeal to a diverse group of voters in a state far more representative of the country as a whole than Iowa and New Hampshire. Sanders, the 78-year Vermont senator and self-described democratic socialist, won by rallying his fiercely loyal base and tapping into support from Nevada’s large Latino community.

“We are bringing our people together,” Sanders declared. “In Nevada we have just brought together a multigenerational, multiracial coalition which is not only going to win in Nevada, it’s going to sweep this country.”

Yesterday’s win built on Sanders’ victory earlier this month in the New Hampshire primary. He essentially tied for first place in the Iowa caucuses with Buttigieg, the former mayor of South Bend, Indiana, who has sought to position himself as an ideological counter to Sanders’ unabashedly progressive politics.

But for all the energy and attention devoted to the first three states, they award only a tiny fraction of the delegates needed to capture the nomination. After South Carolina, the contest becomes national in scope, putting a premium on candidates who have the resources to compete in states as large as California and Texas.

While Sanders’ victory in Nevada encouraged his supporters, it only deepened concern among establishment-minded Democratic leaders who fear he is too extreme to defeat Trump. Sanders for decades has been calling for transformative policies to address inequities in politics and the economy, none bigger than his signature “Medicare for All” health care plan that would replace the private insurance system with a government-run universal program.

Sanders left Nevada for Texas, which offers one of the biggest delegate troves in just 10 days on Super Tuesday.”