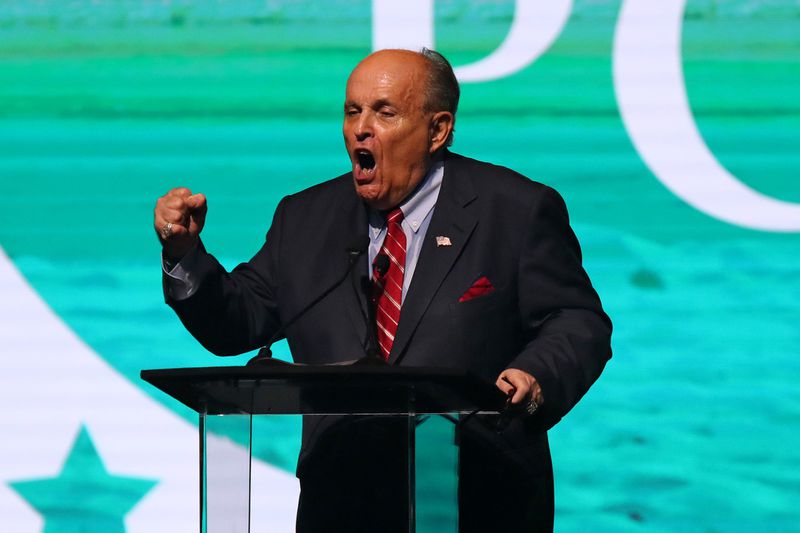 Rudy Giuliani, who has evolved into a buffoon character in his defense of his involvement in President Trump’s Ukraine scandal gave a sad interview to New York magazine where he insists his knowledge of the law will keep him from any criminal prosecution. He currently is  under federal investigation for potential obstruction of justice, fraud and money laundering.  The federal Southern District of New York (SDNY)  is reportedly looking into records and information involving President Donald Trump’s personal attorney and his associates Lev Parnas and Igor Fruman.   As reported in New York magazine and other media.

“It’s quite a change for Giuliani, given that he ran the SDNY for most of the 1980s. Not surprisingly, he has harsh words for the district’s current team in an interview with New York magazine that seems to have been fueled by Bloody Marys.

“If they think I committed a crime, they’re out of their minds. I’ve been doing this for 50 years. I know how not to commit crimes. And if they think I’ve lost my integrity, maybe they’ve lost theirs in their insanity over hating Trump with some of the things they did that I never would’ve tolerated when I was U.S. Attorney.”

Parnas and Fruman were indicted in October on federal campaign finance charges, and Nuzzi asked Giuliani how he ever trusted them in the first place.

“They look like Miami people. I know a lot of Miami people that look like that that are perfectly legitimate and act like them,” the former New York mayor said, adding that neither have ever been convicted of a crime.

“Neither one. And generally that’s my cutoff point, because if you do it based on allegations and claims and — you’re not gonna work with anybody. Particularly in business,” he said.

Giuliani also continued to smear former U.S. Ambassador to Ukraine Marie Yovanovitch, who he previously said was an obstacle in his attempt to find dirt on former Vice President Joe Biden, in part by claiming she was controlled by Jewish billionaire George Soros.

Soros, he asserted, “put all four ambassadors there. And he’s employing the FBI agents.”

When Nuzzi told Giuliani he sounded crazy, he insisted he wasn’t ― and then bizarrely claimed he was more of a Jew than Soros.

“Don’t tell me I’m anti-Semitic if I oppose him,” he said. “Soros is hardly a Jew. I’m more of a Jew than Soros is. I probably know more about — he doesn’t go to church, he doesn’t go to religion — synagogue. He doesn’t belong to a synagogue, he doesn’t support Israel, he’s an enemy of Israel. He’s elected eight anarchist DA’s in the United States. He’s a horrible human being.”

Jonathan Greenblatt, the CEO of the Anti-Defamation League, later condemned Giuliani’s remarks, telling the Daily Beast that the former mayor “is not the arbiter of who is Jewish and who is not, or what is anti-Semitic and what is not.”

“Mr. Giuliani should apologize and retract his comments immediately, unless he seeks to dog whistle to hardcore anti-Semites and white supremacists who believe this garbage,” Greenblatt said.

When NBC News asked Giuliani if the remarks were made it jest, he doubled down via text: “I’m more Jewish than half my friends.”