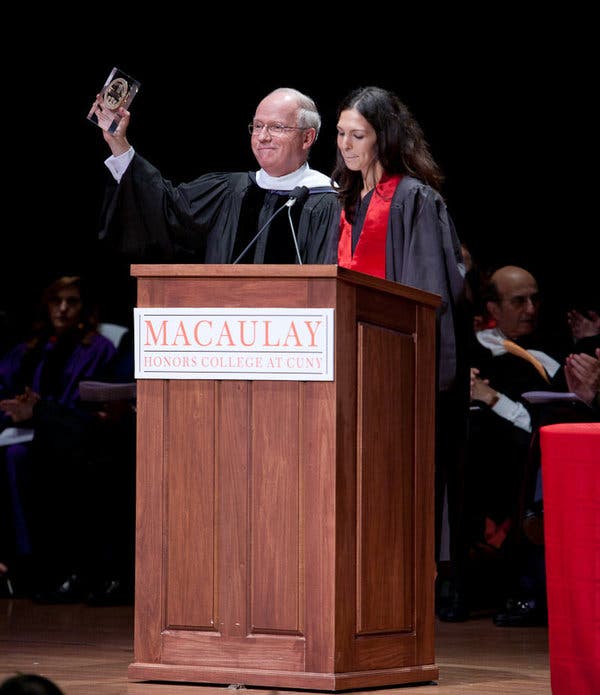 One of CUNY’s most generous benefactors, William E. Macaulay died on November 26th of a heart attack at the age of 74.  The billionaire energy investor gave a $30 million gift to help launch the CUNY honors college which now bears his name.  A graduate of CUNY’s Baruch College, his gift to CUNY in 2006 endowed the full tuition subsidy and special funding for student research projects and study abroad. It also financed the purchase of a five-story collegiate gothic building at 35 West 67th Street in Manhattan as the hub of the selective program, which had been called simply the Honors College and was renamed the William E. Macaulay Honors College.  His full obituary is below written by Sam Roberts of the New York Times.

William E. Macaulay, a billionaire energy investor whose record $30 million gift to the City University of New York has given thousands of select students the same opportunity he was accorded a half-century ago as a middle-class teenager from the Bronx — to graduate tuition free from an elite college — died on Nov. 26 at a hospital in Cleveland. He was 74.

The cause was a heart attack, his daughter Elizabeth Macaulay-Lewis said.

Mr. Macaulay made his fortune in energy company buyouts, overseeing the transformation of the First Reserve Corporation, which he acquired in 1983, into one of the field’s largest private-equity firms. He was chief executive until 2015, shared the title until 2017, and had been executive chairman since then.

He and his wife, Linda, also contributed to the American Museum of Natural History (she was a co-chairwoman of the board); the Rogosin Institute, a kidney treatment and research center, at NewYork-Presbyterian Hospital and Weill Cornell Medical College; and the Macaulay Library at the Cornell University Laboratory of Ornithology. (The couple were avid bird watchers, logging 6,625 species in 147 countries.)

Mr. Macaulay especially prided himself on what may be his most enduring legacy: the highly selective college, founded in 1999, at which the most promising students from eight of the City University’s senior campuses receive additional academic mentoring and financial support.

The couple’s gift in 2006 endowed the full tuition subsidy and special funding for student research projects and study abroad. It also financed the purchase of a five-story Collegiate Gothic building at 35 West 67th Street in Manhattan as the hub of the selective program, which had been called simply the Honors College and was renamed the William E. Macaulay Honors College.

“I wanted to give back,” Mr. Macaulay said in a 2016 interview with Yahoo News. “It’s that simple. If it weren’t for the City University, I wouldn’t have had the opportunity to achieve what I achieved.”

Mr. Macaulay graduated with a degree in economics from the Baruch School of Business at City College in 1966, two years before the business school was spun off as a separate college within the just-established City University system.

“Because CUNY was free, Bill was able to get a high-quality education, which he would not have been able to afford otherwise,” said Professor Macaulay-Lewis, his daughter, who teaches liberal studies and Middle Eastern studies at the Graduate Center of the City University. “He wanted to provide future generations that same opportunity.”

He was primed, therefore, when the university’s chancellor, Matthew Goldstein, reminded him that he might help restore advantages that they had both valued at City College in the 1960s — the prestige of a City College diploma and a cost-free education — but which had been diluted, largely because of political decisions made in the 1970s.

The university agreed in the early 1970s to accept virtually any New York City high school graduate, an open admissions policy that critics said devalued the stature of a City University degree. (The policy has since been abandoned altogether at four-year colleges, with unprepared students now diverted to community colleges.)

The university imposed tuition a few years later under pressure from outside monitors during the city’s fiscal crisis.

Dr. Goldstein envisioned the Honors College as a means to address both issues and to enhance CUNY’s prestige. He went to Mr. Macaulay to help realize those goals.

Since 2005, nearly 4,800 students have graduated from the honors college. More than half of them were the products of New York City public high schools, and about one in five were the first in their families to attend college. Mr. Macaulay regularly attended commencement ceremonies.

The $30 million gift, the largest single donation received by the university at that time, “enabled the university to help its honor students achieve their full potential,” Chancellor Félix V. Matos Rodríguez said in a statement.

William Edward Macaulay was born on Sept. 2, 1945, in Manhattan to John H. Macaulay, an engineer, and Ella (Cook) Macaulay, a homemaker.

After graduating from DeWitt Clinton High School in the Bronx at 16 and from City College in 1966, he received a master of business administration degree from the Wharton School of the University of Pennsylvania and joined Oppenheimer & Company, the brokerage and financial services firm, where he became a protégé of the hedge fund pioneer Leon Levy.

In 1983 he and John Hill, a partner in another buyout firm, acquired First Reserve. As a financial adviser and investment manager, he built the firm into an energy industry specialist that managed some $20 billion in assets at its peak.

In addition to his daughter Elizabeth, Mr. Macaulay, who lived in Greenwich, Conn., is survived by another daughter, Anne Macaulay; his wife, Linda (Rodger) Macaulay; and two grandchildren.