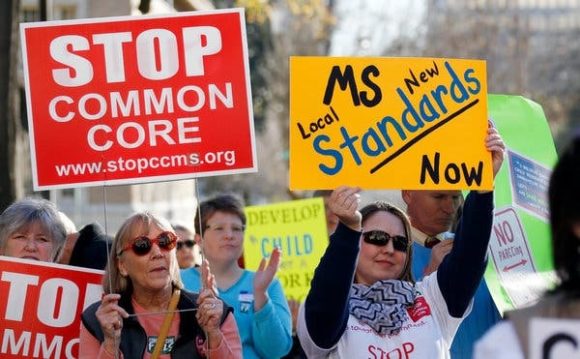 The Common Core was one of the most ambitious education efforts ever in United States history. Educators today have a sense that it was a failure similar to many of the initiatives on the part of the US Department of Education.  More than 40 states signed on to the Common Core State Standards Initiative when it was rolled out in 2010.  But the program faced a number of obstacles and has eventually been replaced or modified in most states. Dana Goldstein has a featured article in today’s New York Times that reviews the program’s implementation.  Anyone interested in education policy would appreciate  the problems of launching a national program in a country where the financing of education is left to states and localities.  In sum, state and local educators, parents, and teachers rebelled against the Common Core as it was implemented and tied to other policies such as standardized testing and assessments that had little to do with the curriculum but a lot to do with national politics and ideology. Below is the entire article.

After 10 Years of Hopes and Setbacks, What Happened to the Common Core?

The plan was hatched with high hopes and missionary zeal: For the first time in its history, the United States would come together to create consistent, rigorous education standards and stop letting so many school children fall behind academically.

More than 40 states signed on to the plan, known as the Common Core State Standards Initiative, after it was rolled out in 2010 by a bipartisan group of governors, education experts and philanthropists. The education secretary at the time, Arne Duncan, declared himself “ecstatic.”

“We are being outpaced by other nations,” President Barack Obama said in one 2009 speech, in which he praised states that were moving toward the Common Core. “It’s not that their kids are any smarter than ours — it’s that they are being smarter about how to educate their children.”

A decade later, after years full of foment in American schools, the performance of American students remains stagnant on the global and national exams that advocates often cited when making the case for the Common Core.

On the Program for International Student Assessment, or PISA, a test given every three years, the United States’ ranking in math and reading relative to other countries has improved, but only because of changes in those other countries’ performance — not because of growth in American students’ abilities on the test.

And low-performing students, who were supposed to benefit most, have especially struggled in recent years.

The disappointing results have prompted many in the education world to take stock of the Common Core, one of the most ambitious education reform projects in American history. Some see the effort as a failure, while others say it is too soon to judge the program, whose principles are still being rolled out at the classroom level.

The Common Core got caught up in an old-fashioned culture war, one that pitted activists on both the right and left, who came to detest the Core, against an education policy establishment that was sometimes surprised by the fierce resistance to its actions.

“There is so much space between the people who cook up these policies and the classroom,” said Amy Wilkins, a longtime advocate in Washington for racial equity in education, and currently senior vice president at the National Alliance for Public Charter Schools.

“We underestimated how difficult it is to change a big, entrenched system,” she said of the broad education efforts of the past two decades.

The Common Core began, in part, as a response to the bipartisan No Child Left Behind Act of 2002, the sweeping federal mandate that required all schools to test students annually in reading and math, in the third through eighth grades and once in high school.

The law was largely seen as a disappointment. It allowed all 50 states to set their own standards and create their own tests, making it impossible to compare students across the country, let alone American children to children abroad.

In response, in 2009, the National Governors Association and the Council of Chief State School Officers, a coalition of state superintendents, formed a working group of consultants, educators and experts tasked with drafting shared national standards in English and math.

In 2010, Kentucky became the first state to adopt the Common Core. The vast majority of states and territories followed. But soon after, the initiative ran into both logistical and political roadblocks.

When Caroline Wilkerson, 29, began teaching elementary school in Lexington, Ky., in 2012, teachers were trying to write their own curriculum materials to match the Core’s expectations; big education publishers hadn’t yet caught up.

In the early years of the rollout, Ms. Wilkerson recalled, there was so much pressure for students to do well on the math and reading tests associated with the standards that science and social studies lessons were sometimes canceled to make more room for the tested subjects.

In the early years of the rollout, Caroline Wilkerson, a Kentucky teacher, recalled that science and social studies lessons were sometimes canceled to make more room for the tested subjects.Credit…Jared Hamilton for The New York Times

Problems like that contributed to the growth of a national opt-out movement, in which parents refused to allow their children to sit for the new generation of tests tied to the Common Core. They complained that test prep had become an obsession for schools and teachers, who were being judged by how well students performed on the exams.

That movement reached its peak in New York in 2015, when 20 percent of students across the state opted out of end-of-year tests.

At the same time, resistance to the Core was growing on the right. Tea Party activists and Fox News personalities talked about it as a classic example of federal overreach in matters best left to local governments.

The program’s association with Mr. Obama — who did not create the Common Core, but did offer funding to states that adopted it — only made it more radioactive on the right.

And liberal and conservative critics of the Core agreed: They did not like the ways it had changed the curriculum.

Both methods are commonly used in high-achieving nations. But to many American parents sitting at kitchen tables and squinting at their children’s homework, they were prime examples of bureaucrats reinventing the wheel and causing undue stress in the process.

The comedian Louis C.K. created a sensation when he wrote on Twitter that his children’s Common Core math homework made them cry.

Lindsey M. Burke, director of the Center for Education Policy at the conservative Heritage Foundation, which fought the Core, said the standards had “disempowered” parents.

A Retreat, at Least in Branding

By the mid-2010s, the Common Core had a public relations problem. More than 20 states eventually repealed, revised or rolled back parts of the program.

Kentucky did so in 2017, with bipartisan support. Many teachers were shocked.

“We couldn’t fathom that they would actually upend the whole system,” said Ms. Wilkerson, who now teaches second grade in Jessamine County, outside Lexington.

So she was relieved, she said, when the new state standards were similar to the Common Core’s. But rather than bear a name that evoked universality, they were called the Kentucky Academic Standards. This was a tactic used by many of the states that retreated from the official coalition.

Despite the challenges, Ms. Wilkerson said she believed in the Common Core’s priorities, such as more nonfiction reading, which she thinks better prepares students for work they will do in college.

The issue of lost time for history and science has gotten better, she said, as educators become more aware of research showing that rich social studies and science lessons build background knowledge that improves reading comprehension.

Indeed, many of those who crafted the Common Core said that despite all the political resistance, the program has penetrated deeply into classrooms.

Washington, D.C., one of the few education systems to see growth in reading on the most recent National Assessment of Educational Progress, has attributed its success, in part, to its long-term commitment to the Common Core.

“It’s a bell that can’t be unrung,” said Sandra Alberti, a senior fellow at Student Achievement Partners, the consulting group founded by three of the lead writers of the Common Core.

Still, not everyone agrees that the Common Core was faithfully implemented at the classroom level.

Eric Schildge, 31, a middle-school English teacher in Massachusetts, recalled spending hours in 2013 reading the standards and trying to understand them. Later, he watched as the Boston charter school where he worked carried out the nonfiction mandate by assigning students to read biographies of writers — even though the standards had called for a greater emphasis on argument-driven essays and articles, not narrative nonfiction.

Massachusetts, one of the highest-achieving states in the nation, announced an end to Common Core testing in 2015.

A Question of More Time

Many of those who developed the Common Core said a key weakness was that the standards were not rolled out with lesson plans, textbooks and widespread teacher-training programs.

They are now trying to solve that problem. William G. McCallum, a lead writer of the math standards, has moved on to creating more rigorous curriculum materials, which aim to bring the same concepts directly into the classroom. A nonprofit backed by some of the groups that financed the Common Core, EdReports, now grades curriculum materials on how closely they align with the program, a resource that some large districts, like Baltimore, have used.

These moves have convinced some that the Common Core can still transform student achievement — it just needs more time.

“Part of what we’re doing is playing catch-up,” said Allan Golston, president of the United States program at the Bill & Melinda Gates Foundation, a lead philanthropic backer of the Core. “We did learn about the importance of wider community engagement.”

Others said that the attention paid to raising test scores would be better focused on the larger societal problems that hold many children back.

Jack Schneider, a professor of education at the University of Massachusetts, Lowell, said the idea of shared, national standards made sense, but that it was “naïve” to expect them to make a big impact on student achievement without broader investments in early childhood education, teacher training and school integration.

Ultimately, he added, “I would say that poverty alleviation programs are a better investment than standardized tests.”