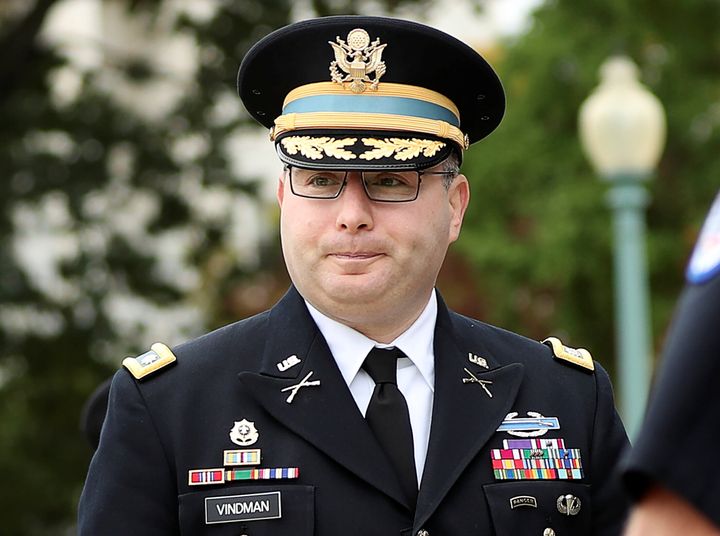 Army Lt. Col. Alexander Vindman, 44, testified yesterday behind closed doors that he was troubled by President Trump’s phone call with Ukraine President Volodymyr Zelensky.  Vindman also testified that he heard it in real-time and that he twice reported it internally to his superiors. Vindman currently serves as the top Ukraine expert for the National Security Council. He immigrated to the U.S. from Ukraine as a child and subsequently served multiple overseas tours in South Korea, Germany and Iraq, where he was injured by a roadside bomb for which he received the Purple Heart. “I am a patriot,” Vindman said in his opening statement, “and it is my sacred duty and honor to advance and defend our country irrespective of party or politics.” Vindman added that he “did not think it was proper to demand that a foreign government investigate a U.S. citizen,” referring to Trump’s urging of Ukraine’s government to probe former Vice President Joe Biden and his family.

But several of Trump’s top allies ― including Fox News host Laura Ingraham, lawyer John Yoo and former Rep. Sean Duffy of Wisconsin ― suggested Vindman had dual loyalties on the basis of his being born in Ukraine. Trump also repeatedly sought to dismiss Vindman’s testimony on Twitter, calling him a “Never Trumper witness.”

A number of  Republicans  came to the defense of the war veteran.

“I’m not going to question the patriotism of any of the people coming forward,” Senate Majority Leader Mitch McConnell (R-Ky.) told reporters at a weekly press conference.

Republican Rep. Liz Cheney of Wyoming said the attempts by members of her party to slur the patriotism of Army Lt. Col. Alexander Vindman are “shameful” and that “we need to show that we are better than that as a nation.”

Sen. Joni Ernst (R-Iowa), who also served in Iraq, said the attacks on Vindman were “inappropriate” and called him an “honorable” man.

The attacks on Vindman are “absurd, disgusting, and way off the mark,” said Sen. Mitt Romney (R-Utah).

“This is a decorated American soldier and he should be given the respect his service to our country demands,” Romney added.

Few Republicans challenged the substance of Vindman’s account, however, despite Trump and his top aide and son-in-law Jared Kushner urging lawmakers to defend the president on the facts of the matter. Instead, GOP lawmakers repeated familiar refrains about not having read Vindman’s testimony yet and declined to comment. Some sought to dismiss it outright as old news.

“It sounds like it’s just a reiteration of what we already know,” Sen. John Cornyn (R-Texas) told reporters on Tuesday when asked about Vindman’s opening statement.

Vindman is the first witness with firsthand knowledge of Trump’s July 25 phone call to testify in the House’s impeachment inquiry. Last month, after a complaint from a Trump administration whistleblower was first made public, Republicans dismissed the whistleblower’s account based on the fact the person said they were not a direct witness to the president’s phone call.

We need to see a few more Republicans coming forward and putting the country ahead of party.