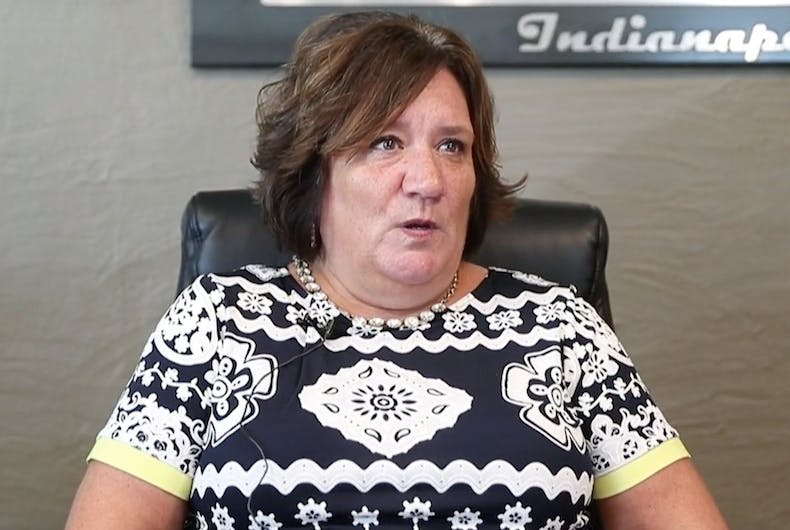 Indianapolis Archbishop Charles Thompson’s crackdown on married LGBTQ employees in his archdiocese apparently extends to a straight woman who spoke up in support of her fired colleagues.

Kelley Fisher, a former guidance counselor at Roncalli High School, is claiming that the Roman Catholic archdiocese fired her after she publicly defended two married lesbian women who used to be her co-workers.

Fisher, who does not herself identify as LGBTQ, filed a complaint with the Equal Employment Opportunity Commission this spring.

“If you publicly support, you know, (being) against discrimination … you too, can be a victim of losing your job,” she told The Indianapolis Star last Thursday.

She said she decided to speak out now because she made a personal decision to “let faith guide me instead of fear.”

In response to an inquiry about Fisher, the archdiocese told HuffPost in a statement that it has a constitutional right to hire leaders who support its “religious mission.”

Fisher’s firing occurred as Thompson attempted to circle the wagons against a nationwide cultural shift in opinion toward favoring same-sex marriage. Roughly two-thirds of both white and Hispanic Catholics now support allowing gay and lesbian couples to marry legally, according to the Public Religion Research Institute.

Over the past two years, Thompson has tried to draw a line in the sand against this rising tide of support for queer Americans. His archdiocese has fired at least three staffers in same-sex marriages, including the two co-workers Fisher sought to defend.

Lynn Starkey, a former Roncalli guidance counselor, was fired this spring after working at the Catholic school for 39 years. Shelly Fitzgerald, a guidance counselor and Roncalli alumna, was fired from the school in 2018 after working there for 15 years. Fitzgerald’s termination prompted some students to launch an advocacy group, Shelly’s Voice, that is pushing the archdiocese to change its employment policies toward married gay employees.

All three fired employees have filed lawsuits against the archdiocese.

Thompson’s attempt to fire a fourth LGBTQ teacher was foiled earlier this year when the Jesuit school where the teacher worked refused to follow the archbishop’s orders. Thompson kicked the school out of his archdiocese in retaliation ― a decree the Vatican later suspended.

Fisher was technically an employee of Indianapolis’ chapter of Catholic Charities. The organization places social workers at local schools. Fisher had worked at Roncalli for about 15 years.

Fisher told the Star that she published two public Facebook posts in support of the women. One of the posts was a copy of a letter she sent to archdiocese and Roncalli leaders last year, asking them to change their policies concerning the employment of people in same-sex marriages.

The posts reportedly prompted Fisher’s bosses at Catholic Charities to pull her into a meeting with Roncalli’s principal. Fisher claims her employers expressed concerns that she wouldn’t adhere to Catholic teachings while counseling LGBTQ students.

Fisher was placed on a “performance improvement plan,” then barred from returning to Roncalli the following school year. Catholic Charities declined to place her in another Catholic school. She was fired in late May, according to the Star.

Fisher said she worries about students at Roncalli who may not have a “safe place” to go to now that she’s gone. One queer former student told NBC that Fisher served as his “protection” while he attended Roncalli.

In June, Thompson insisted that his archdiocese is not on a “witch hunt” for gay teachers, but instead is responding as instances are brought to his attention.

The archdiocese has said that it treats Catholic school teachers, leaders and guidance counselors as “ministers” who are required to uphold church teachings. The Supreme Court has recognized that parochial schools can claim a “ministerial exception” to generally applicable anti-discrimination laws ― even if the employee in question spends most of his or her time on non-religious duties.

Fisher doesn’t agree with being labeled a minister.

The archdiocese is “trying to say anyone who works for a Catholic school, that we are ministerial employees,” she told NBC. “Yet I have no training in it, I’m not a priest, I’m not a minister.”

She is a trained school guidance counselor, however, and as a result, she said she is bound by a code of ethics that prevents her from discriminating and compels her to speak out for the vulnerable.

“You can look at social work ethics, you can look at school counselor ethics, you can even look at the Catholic Charities mission statement where it all says in there we are supposed to be an advocate for those that are vulnerable and we can’t discriminate,” Fisher told the Star. “So I felt like I was being targeted for doing my job.”