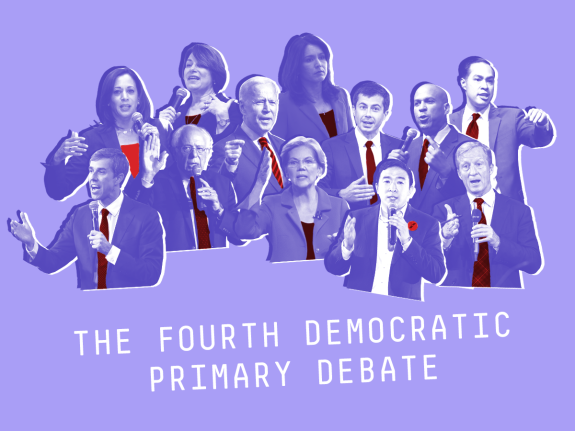 I was not able to watch the fourth Democratic presidential debate last night although I must admit that a debate among  so many candidates is not appealing to me.  Below are takeaways courtesy of several news media outlets.

Welcome to life as a frontrunner, Sen. Warren

Buttigieg and Klobuchar got that bandwagon going early when they criticized Warren not giving a straight answer to a question about whether middle-class taxes would go up under “Medicare for All,” a government-sponsored health care proposal she has backed.

“Your signature is to have a plan for everything, except this,” Buttigieg said. “No plan has been laid out to explain how a multi-trillion-dollar hole in this Medicare for All plan that Sen. Warren is putting forward is supposed to get filled in.”

Klobuchar quickly piled-on: “I’m sorry Elizabeth but … the difference between a plan and a pipe dream is something that you can actually get done.”

Warren responded by repeating her usual answer when challenged on this point, focusing on the bottom-line effect the plan would have on middle-class families and pledging she wouldn’t support a proposal that raised overall costs for them.

Republicans have also attacked Warren over unwillingness to address the question, which she has dismissed as “Republican framing.”

Klobuchar and O’Rourke also went after Warren over her proposal to levy a 2% on the super-rich.

“I want to give a reality check here to Elizabeth; nobody on this stage wants to protect billionaires,” Klobuchar said.

In a nod to Tom Steyer, the wealthy hedge fund manager who just recently entered the presidential race and was participating in his first debate, Klobuchar wryly added, “Not even the billionaire wants to protect the billionaires.”

O’Rourke joined in by accusing Warren of being “more focused on being punitive or pitting one part of the country against the other instead of lifting people up.”

Yang called out Warren for not addressing the threat automation poses to U.S. workers That prompted several other candidates to address his signature universal basic income proposal ― perhaps the biggest coup for his campaign so far.

Biden meanders in talking about the Ukraine flap

Biden didn’t directly answer if it was wrong that during his tenure as vice president, his son Hunter served as a board member for the Ukrainian company Burisma Holdings ― which spurred Trump’s controversial phone call to Ukraine’s president, which in turn could lead to Trump’s impeachment.

“I never discussed a single thing with my son about anything to do with Ukraine … we always kept everything separate,” Biden said about his son’s work overseas. “There would be no potential conflict. My son made a judgment. I’m proud of the judgment he made … the fact of the matter is this is about Trump’s corruption.”

Hunter Biden acknowledged in an interview with ABC airing Tuesday that it was “poor judgment” on his part to join the venture, and conceded it was likely that his last name helped him professionally.

New Jersey Sen. Cory Booker actually gave a more succinct answer in defense of Biden, noting the hypocrisy of Trump and Republicans seeking to attempt to make hay of the matter, given the financial conflicts of interest that cloud the Trump administration.

“We are literally using Donald Trump’s lies, and the second issue we cover on this stage is elevating a lie and attacking a statesman,” Booker said, referring to Joe Biden.

Buttigieg, Klobuchar make a play for the middle lane

Buttigieg and Klobuchar may have delivered their best debate performances.

Buttigieg, in particular, seemed to put more sustained effort into positioning himself as an alternative for centrists to Biden. He played up his small-town roots by recalling driving past closed factories while growing up in the post-industrial Midwest. The 37-year-old also repeatedly expressed his aversion to Washington elites, calling out “senators” and “congressmen” who have not gotten many things done during his “entire adult life.”

During a segment on foreign policy and Trump’s recent decision to withdraw troops in Syria, Buttigieg drew applause after he called for the U.S. to stand by its allies.

“I don’t need lessons from you on courage ― political or personal,” Buttigieg, a military veteran, told O’Rourke in one sharp exchange.

Vermont Sen. Bernie Sanders didn’t look or sound like a guy who had a heart attack two weeks ago. He was as animated as ever, landing sharp blows against Trump, as well as other Democrats on stage.

“I’m healthy, I’m feeling great,” the 78-year-old when asked about his health and age.

After Booker jokingly interjected that Sanders supports medical marijuana, Sanders quipped, “I’m not on it tonight.” The line elicited laughter and applause from the audience.

But Sanders’ best moment may have been a fast-ball at Biden after the former vice president asserted that he knew how to “get stuff done,” and that he didn’t simply offer plans about how to do so.

“You know what else you got done? You got the disastrous war in Iraq done. You got a bankruptcy bill that’s hurting middle-class Americans all over the country,” Sanders retorted, referring to positions Biden took as a senator fro Delaware.

Steyer, whose focus is on combating climate, started strong in the debate’s opening act, saying that “every candidate here is more decent, more coherent and more patriotic than the criminal in the White House.” That may have been his only good line of the night, however, as the debate hummed along and he barely made his presence felt.

California Sen. Kamala Harris also needed a breakout moment ― similar to the one she enjoyed in the first debate in June ― to reverse her struggling poll numbers. She won applause and good marks from women’s rights groups when she noted that none of the previous encounters had featured any direct questions about reproductive rights, calling the omission “outrageous.”