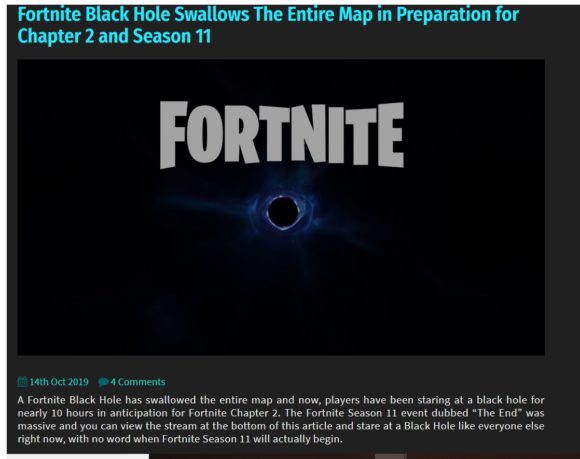 Sunday was a sad day for Fortnite gamers.  Players eager to enter the game’s virtual world to fight one another were instead confronted by a blank screen with a black hole at its center. The game’s 10th season is now over, and its spectacular ending prompted speculation that major changes could be on the way.

Fortnite is enjoyed by millions of people worldwide including my fourteen-year-old grandson, Michael and his friends.

If you are not familiar with it, players enter the game by hang gliding into an island unarmed. Once there, the goal is to survive. Weapons are strewn about and 100 players fight it out, alone or by teaming up with friends.

The game, which is popular among teenagers, has features that encourage players to remain on the move and to confront one another. When they aren’t themselves playing, some fans like to watch others fight it out, often with commentary, on streaming services like Twitch.

Around 2 p.m. Eastern time on Sunday, glowing rifts emerged in the game’s darkened sky, an alarm began to sound and a rocket launched from the island, according to videos posted online. More rifts emerged and rockets began pelting the island, wreaking havoc.

The rockets converged at a point on land, and a meteor that had been hovering overhead crashed down. The island sustained further damage and, eventually, players’ avatars were sent skyward, where they could view the destruction as dramatic music played.

A final explosion sparked the formation of a black hole, pulling all light, objects and players into a swirling central point onscreen, which went black before a dark, wispy blue ring materialized. That image is what players and visitors to the game’s website now see.

That Fortnite’s 10th season would end on Sunday was no surprise — its creator, Epic Games, had previously announced as much. But it wasn’t clear what would come next, and when.

As of late yesterday, the official Fortnite Twitter account’s history had been wiped clean, save for a single tweet linking to a live stream of the black hole.

A purportedly leaked video posted on social media early Monday afternoon claimed to show an official trailer for the next installment, identified in the clip as Fortnite Chapter 2, Season 1.

“This looks like a completely different game,” the streamer GhostNinja said of the clip in a live stream to about 75,000 viewers on Monday. “This is what we needed.”

Historically, the transitions between Fortnite seasons have been short, often with just hours between the ending of one and the beginning of the next. Those transitions have been marked by changes to the island’s map, but speculation has been swirling that a more substantial update might be coming — and that it could include a new setting altogether.

I have to confess that when my grandson, Michael, taught me this game, it was quite intriguing.  While there are battles, escapes and provocative avatars, there is no blood or gore to the action just movement and outwitting opponents.  My hand-eye coordination is not fast enough for Fortnite but it is easy to understand its popularity.  I sense that Fortnite Chapter 2, Season 1 will be as popular as its predecessor.