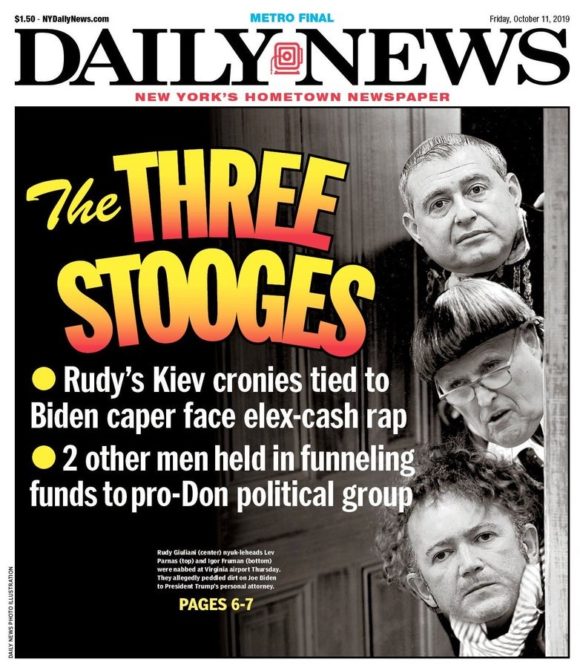 It was also reported that Giuliani was planning to leave yesterday for Vienna, Austria, a day after two business associates who helped him with his dealings with Ukraine officials were arrested as they were headed to the same destination, as reported by The Wall Street Journal.   The Southern District of New York indicted the two Soviet-born Florida businessmen on federal campaign finance charges for allegedly channeling foreign money and making fraudulent straw donations in order to hide their political contributions and give in excess of campaign contribution limits to Trump and other Republican candidates.  Starting in 2016, Fruman and Parnas contributed at least $955,000 to Republican candidates, committees and super PACs.  The $325,000 contribution to America First Action, a pro-Trump super PAC, made in the name of Global Energy Producers LLC in 2018 was the largest contribution made by Fruman and Parnas. The indictment charges the two businessmen with illegally masking their identities by contributing to the super PAC through a shell corporation.

The Atlantic’s Elaina Plott reported that Giuliani told her he would not be able to meet Thursday evening for an interview because he was planning to fly to Vienna in the evening. Giuliani told that to the reporter around the same time that Parnas and Fruman were arrested at Dulles International Airport while waiting to board a flight to Vienna with one-way international tickets Wednesday night.

According to Plott, Giuliani texted her late yesterday declining to comment on why Parnas and Fruman were headed to Vienna, and why he was planning to be there 24 hours later.

In comments to the Journal, Giuliani said that while Parnas and Fruman were going to Vienna on issues “related to their business,” he was only going to meet with them when they returned to Washington.

As the Journal reported, the two men have introduced Giuliani to multiple current and former Ukrainian prosecutors to discuss his attempts at getting the country to investigate former Vice President Joe Biden and his son Hunter, who served on the board of a Ukrainian gas company. Trump’s call with Ukraine’s president about such an investigation is at the center of a House impeachment inquiry into him.

Separately, House Democrats leading the inquiry issued subpoenas on Thursday to Parnas and Fruman for documents related to their work with Giuliani. Before their arrest, the House requested that Parnas appear for a deposition on Thursday and Fruman on Friday; their counsel declined the request earlier this week.

Jay Sekulow, another of Trump’s personal lawyers, told reporters yesterday that Trump has nothing to do with the businessmen’s campaign finance schemes. Trump himself told reporters he doesn’t “know those gentlemen,” but that “it’s possible I have a picture with them.”