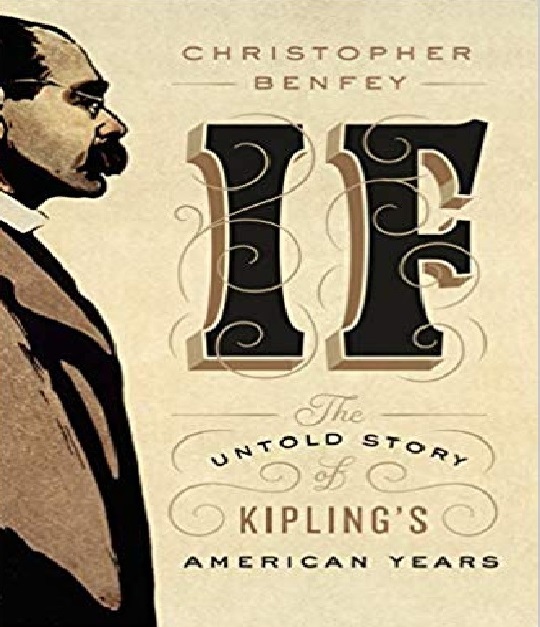 I just finished reading If: The Untold Story of Kipling’s American Years by Christopher Benfey.   I was a bit of a Kipling fan but did not know he spent ten years living in Vermont in 1890s during which he wrote, The Jungle Book and Captains Courageous, both of which I read when I was a teenager.  Later as an adult and with a more critical perspective, I came to understand that some of his work was supportive of colonial power and intrusion.  Benfey makes a case that Kipling has a complicated history that needs a careful analysis.  Here are several brief comments about the book from amazon.com.

“Benfey eloquently argues not only that Kipling’s engagement with the United States made him the writer he became, but that he lavishly returned the favor. . . Benfey reminds us of our debt to a category-demolishing, globe-striding man who indeed contained multitudes, the author of an immortal ode to equanimity.” — The New York Times Book Review

“Benfey tells it well, catching nuances that some biographers have missed. He argues that Kipling was profoundly altered by his experience of America, and that America, in turn, was altered by its experience of Kipling.” — The New Yorker

“These years were joyous and then dire ones for Kipling, and Mr. Benfey recounts it all with a fine touch.” — The Wall Street Journal

“[Benfey] draws on correspondence, memoirs and ‘patterns of suggestion and implication’ in poems, essays and stories to assess the impact of Kipling’s decadelong sojourn in the United States on his literary legacy.” — Minneapolis Star Tribune

“Mount Holyoke professor and Amherst resident Christopher Benfey’s focused and illuminating new biography of Kipling, If: The Untold Story of Kipling’s American Years (Penguin), looks at the decade Kipling spent in New England, calling these years “the key creative period in his entire career.” Kipling’s literary luminance was unparalleled (he won the Nobel Prize in 1907 at age 41); but with the rise of post-colonialism, Kipling’s reputation began to shift, and he fell out of favor, understood as ‘a jingoist of Bard of Empire, a man on the wrong side of history.’ Benfey, whose award-winning A Summer of Hummingbirds (Penguin) looked at the intersection of Dickinson, Twain, Stowe, and Martin Johnson Heade, steers his attention here on the ways in which the United States impacted the author, and the ways the author impacted the United States, arguing that Kipling’s influence spanned literature and politics, and altered perceptions of masculinity and the supernatural. Benfey does a masterful job detangling a complex figure.” — Boston Globe

“Rudyard Kipling is considered a British literary icon, but between 1889 and 1899, he lived in the United States. His time in America deeply shaped his writing. Kipling’s attitudes toward race and empire have complicated his legacy, but Christopher Benfey points to the continuing relevance of an Englishman who was also a fan of America.”—Christian Science Monitor, “10 Best Books of July”

I enjoyed the book immensely and at 220 pages, finished it in less than a week.  The last chapter where Benfey ties one of Kipling’s poems to the Vietnam War was most interesting.

I highly recommend it!