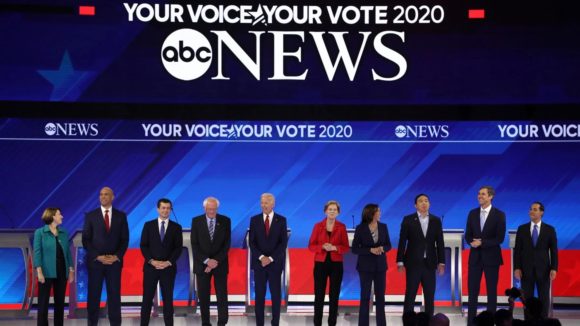 Last night, ten hopefuls were chosen to participate in the Democratic Presidential Debate at Texas Southern University and hosted by ABC News in partnership with Univision.  Here are some takeaways.

Joe Biden was the focus of attack from the other candidates

Biden had moments when he appeared to stumble in the previous two debates and Thursday night was no different. He had an odd interjection when discussing health care with Sanders, stating “This is America” when the socialist senator from Vermont cited the United States’ high health care costs compared to Canada. He said the Obama administration never held immigrant children behind fences nor separated families, both statements that are untrue. Julián Castro needled Biden repeatedly, charging the former vice president “wants to take credit for Obama’s work but doesn’t want to answer questions.” Biden misspoke in saying nonviolent crimes shouldn’t result in jail time, which an aide corrected during the debate to say he meant nonviolent drug crimes.

Near the end of the debate, Biden answered a question about the legacy of slavery and segregation with a rambling discourse that touched on mortgage policies, teacher salaries, parental responsibility and circled around to Venezuela.

Elizabeth Warren is on message

Warren turned in another brisk performance on the debate stage. Warren was seldom challenged and she deflected the charge that her health-insurance plan would require a middle-class tax increase by criticizing insurance industry profits. Warren also continued her practice of tying policy discussions to her personal history, bringing up her time as a public school teacher when education policy was the topic. In a night that turned contentious at times, she avoided directly criticizing her fellow candidates at length.

Democratic presidential contender Andrew Yang said he supports a mix of options, including charter schools, in trying to fix the nation’s education system.

The former tech entrepreneur said at Thursday night’s debate that he is “pro-good school.” Yang also said that his proposed “Freedom Dividend” would help lower-income families support their children’s educational needs while alleviating teachers already overburdened because many are going beyond classroom instruction, compensating for support some students aren’t getting at home.

Several candidates, including Pete Buttigieg (BOO’-tuh-juhj), Kamala Harris and Elizabeth Warren, advocated for raising teacher salaries — something Cory Booker noted that “we actually did it” as mayor of Newark, New Jersey.

Both Warren and Bernie Sanders promoted student debt cancellation plans. Harris, a graduate of a historically black university or college, noted her proposal to put $2 billion toward the institutions’ teacher training programs, drawing applause from the audience at Texas Southern University, a Houston HBCU.

Following the mass shooting in El Paso last month, former Texas Rep. Beto O’Rourke returned to his hometown to offer support to victims, and rebooted his struggling presidential campaign with a focus on gun control. And it paid off at the debate in Houston, where O’Rourke delivered a solid performance amid praise from his rivals for his handling of the attack.

O’Rourke was asked if he would stand by his call for a mandatory government buyback program for assault rifles.

“Hell yes, we’re going to take your AR-15, your AK-47,” the former Texas congressman shouted to cheers from the audience. “We’re not going to allow it to be used against our fellow Americans anymore.”

Buttigieg began his answer by saying that as a military officer serving under the “don’t ask don’t tell” policy and as an elected official in Indiana when Mike Pence was governor, he wondered whether openly acknowledging his sexuality would “be the ultimate career-ending professional setback.”

“I came back from the deployment and realized that you only get to live one life,” Buttigieg recalled. “And I was not interested in not knowing what it was like to be in love any longer, so I just came out.”

Buttigieg came out during his reelection campaign for mayor in 2015. He was reelected with 80 percent of the vote.

“When I trusted voters to judge me based on the job I did for them, they decided to trust me,” he said. “What I learned is that trust can be reciprocated. And part of how you can win and deserve to win is to know what’s worth more to you than winning. And I think that’s what we need in the presidency right now.”’

While it was a first for Buttigieg on the debate stage, the 37-year-old has talked about being gay on the campaign trail, often appearing at rallies with his husband, Chasten Buttigieg (the couple married in 2018).