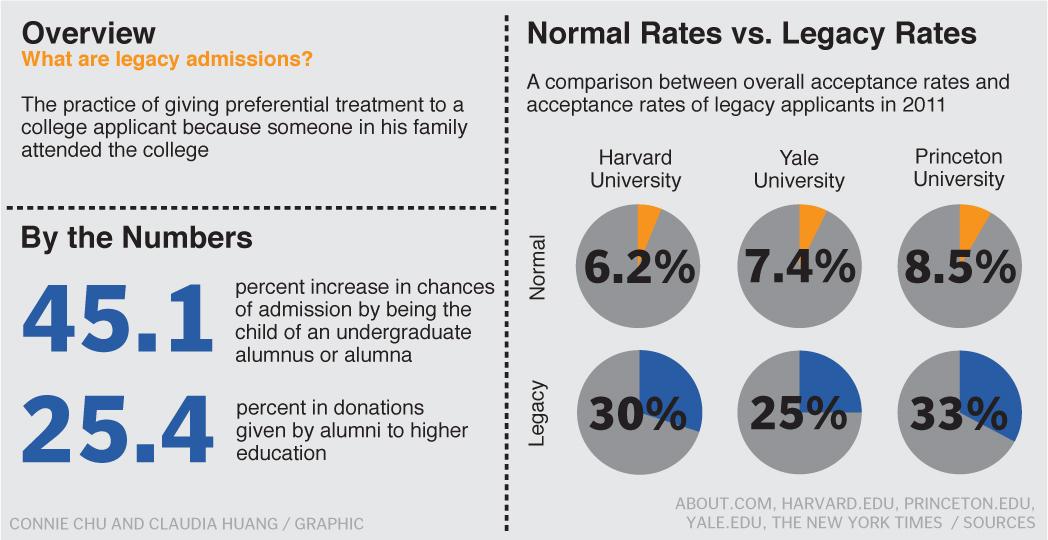 The New York Times editorial this morning calls on American colleges and universities to stop giving preferential treatment to the children of alumni.  The editorial comments that preferential treatment for legacy admissions is anti-meritocratic, inhibits social mobility and helps perpetuate a de facto class system. In short, it is an engine of inequity. Little wonder that it is unpopular with most Americans, yet supported by the affluent who both oversee the college admissions process and are its primary beneficiaries.

In sum, a country struggling with deeply rooted inequality need not continue an affirmative action program for successful families.

The entire editorial is below.

For nearly a century, many American college and university admissions officers have given preferential treatment to the children of alumni.

The policies originated in the 1920s, coinciding with an influx of Jewish and Catholic applicants to the country’s top schools. They continue today, placing a thumb on the scale in favor of students who already enjoy the benefits of being raised by families with elite educations. Of the country’s top 100 schools (as determined by the editors at U.S. News & World Report), roughly three-quarters have legacy preferences in admissions. These anachronistic policies have been called “affirmative action for the rich” and “affirmative action for whites.”

Preferential treatment for legacy admissions is anti-meritocratic, inhibits social mobility and helps perpetuate a de facto class system. In short, it is an engine of inequity. Little wonder that it is unpopular with most Americans, yet supported by the affluent who both oversee the college admissions process and are its primary beneficiaries.

Legacy admissions are no ordinary leg up. In 2011, a Harvard researcher who studied 30 of the nation’s most selective schools found that all legacy applicants had a 23 percent higher probability of admission, while “primary legacy” students (those with a parent who attended the school as an undergraduate, rather than, say, a grandparent or aunt) had a 45 percent higher probability compared with their peers, all other things being equal.

A federal trial last year over the admission practices at Harvard University focused on’ how the school’s affirmative action policies may have affected Asian-American applicants. That case is still being considered by a judge. But in the course of the trial some eye-popping numbers came to light. Between 2010 and 2015, the admission rate for legacy applicants at Harvard was higher than 33 percent. It was 6 percent for non-legacies. More than 20 percent of the white applicants admitted to the school during that period were legacy students.

Backers of legacy preference point out that at Harvard and other schools across the country, the student body — and with it the pool of alumni — has gotten more diverse over time. That means that the composition of the legacy population is also diversifying. At Harvard, evidence from the trial showed, some 80 percent of legacy admissions for the class of 2014 were white, while only 60 percent of legacies in the class of 2019 were white. Would ending legacy preference equate to pulling up the ladder ahead of a more diverse group of students who could leverage their legacy status?

Not in the least. Consideration of race in admissions can be defended not only as a remedy for past injustices but also as an imperative for schools seeking to represent the population at large. But continuing to give applicants an advantage simply because of where their parents went to school is, as one critic called it, “a form of property transfer from one generation to another.”

Colleges counter that the children of alumni — partly by virtue of the education their parents received — are well qualified for admission into their schools. That raises the question: If the value of a degree is indeed generational (research shows that it very likely is), why do the progeny and grandprogeny of graduates deserve yet another thumb on the scale?

Like many policies of past eras, legacy admissions get uglier the closer you look at them. A few decades ago, the percentage of legacy students at top schools was sometimes higher than it is today. But admission rates at those institutions have fallen much faster than the percentage of legacy students. “If you take a typical Ivy League school, maybe 20 or 30 years ago, they might admit two-thirds of legacy applicants. Now they might admit one-third of legacy applicants. But, at the same time, their overall acceptance rate has probably gone down from between 20 and 25 percent to between 5 and 10 percent. So, proportionally, being a legacy is even more of an advantage,” Dan Golden, an investigative journalist, told The New Yorker.

Schools make various arguments about the value of legacy preference. Most often, they argue that it helps with donations, which in turn helps fund financial aid programs for needy students and the construction of facilities that help the entire organization.

Research, however, has cast serious doubt on this line of reasoning. A group of researchers studied data from the top 100 schools in the country (again ranked by U.S. News) from 1998 to 2008 and found that “there is no statistically significant evidence of a causal relationship between legacy preference policies and total alumni giving among top universities.”

Another argument that college presidents make is that multigenerational enrollment helps improve the institutional ethos, tightening the bonds of community for those lucky enough to be admitted. That may be so, but it comes at a high cost in unfairness. College admission is a zero-sum proposition — for every legacy admitted, another promising applicant is denied the career and economic opportunity that a top degree can provide.

Little wonder that American universities are a global outlier when it comes to legacy preference. Oxford and Cambridge Universities, for instance, gave up the practice decades ago. In the United States, schools like Texas A&M University and the University of Georgia dropped legacy admissions and continue to thrive, while schools like the Massachusetts Institute of Technology historically haven’t used them. In a 2012 blog post, Chris Peterson, an assistant director in the M.I.T. admissions office, put the issue in stark terms. “I personally would not work for a college which had legacy admission because I am not interested in simply reproducing a multigenerational lineage of educated elite. And if anyone in our office ever advocated for a mediocre applicant on the basis of their ‘excellent pedigree’ they would be kicked out of the committee room. So to be clear: if you got into M.I.T., it’s because you got into M.I.T. Simple as that.”

Reform of higher education is in the air. After the college admissions cheating scandal this spring revealed a rot at the heart of higher ed admissions, lawmakers pledged to take action to reform the system. A bill introduced in the California State Legislature would bar any school that gives preferential treatment to donors or legacies from participating in the state’s Cal Grants program. In April, Senators Chuck Grassley and Ron Wyden, both members of the Senate Finance Committee, called on the Internal Revenue Service to step up enforcement of existing tax laws that may have prohibited the various charitable-giving mechanisms that allowed wealthy parents to buy their kids seats at top schools.

Mr. Wyden went a step further, introducing legislation that would force schools to “establish a policy that bars consideration of family members’ donations or ability to donate as a factor in admissions” in order for donations to the school to be fully tax deductible.

More drastic measures have been proposed. A report on narrowing racial and ethnic gaps in higher education, released early this year by New America, a liberal research organization, outlined a federal remedy. “Congress should withhold Title IV aid to those highly resourced and highly selective institutions that engage in legacy admissions and other preferential admissions treatments that overwhelmingly favor wealthy and white families, including early decision programs.”

Withholding federal funds — a public policy bulldozer that the federal government successfully used against schools that violated civil rights laws — would be a major step, but one that also risks hurting low-income students who earn spots at elite school and need the aid.

Instead, the government could require schools to tally and publish how many of their students are legacy admits, along with their scores and socioeconomic status, as a way to give the issue more publicity and to shame them into ending the practice. Senator Ted Kennedy — a legacy student if ever there was one — introduced legislation to do just that in 2003.

Another approach would be for schools to stop explicitly asking applicants about relatives who may be alumni. Many college applications, including the Common Application, which is used by more than 800 schools, asks students to report where their parents earned degrees, putting applicants in the odd position of having to disclose their legacy status even if they’d rather not.

Yet another idea, put forward by Aaron Klein and Richard Reeves, Brookings Institution researchers who study inequality, would give incentives to schools to drop anti-meritocratic policies, including legacy admissions, in exchange for a reduction in their endowment taxes.

Whatever the mechanism, it makes sense for a group of competitor schools to take the leap together, a mutual stand-down. Doing so would be in the best traditions of American higher education, which for decades has worked to extend opportunity to generations of poor and minority students. Inaction by the academy, on the other hand, risks fueling a growing public sense that higher education is part of the crisis of the American establishment.