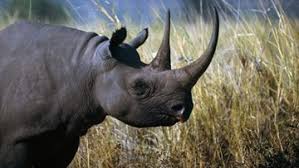 The Trump administration announced yesterday that it will allow a Michigan trophy hunter to import the remains of a rare black rhinoceros he shot in Africa.  As reported by the Associated Press.

“Last year, Chris D. Peyerk, of Shelby Township, applied for a permit required by the Fish and Wildlife Service to import animals protected under the Endangered Species Act, documents reveal. Peyerk, the president of a large construction contracting company, had paid $400,000 to an anti-poaching program to hunt a male, south-western black rhino inside a Namibian national park in May 2018.

Records show that Peyerk hired John J. Jackson III — a Louisiana attorney who advises the Fish and Wildlife Service and was appointed to the International Wildlife Conservation Council last year — to represent him in his effort to get a permit. The latter agency was established under the Federal Advisory Committee Act, at the behest of then-Interior Secretary Ryan Zinke, “to increase awareness of the conservation and economic benefits of United States citizens traveling to foreign nations to engage in hunting.”

“We establish and support programs on the ground that enhance the survival of the particular specie,” Peyerk told the Associated Press, when asked whether there was a conflict of interest between his roles at the two federal agencies. “Our mission is the recovery of the species population, not the private interest of the hunter.”

The fee that Peyerk paid reportedly went to a trust fund that the Namibian government set up to promote the coexistence of humans and wildlife. Still, the Humane Society criticized the Trump

“We urge our federal government to end this pay-to-slay scheme that delivers critically endangered rhino trophies to wealthy Americans while dealing a devastating blow to rhino conservation,” said Kitty Block, the head of the Humane Society of the United States and Humane Society International. “While we cannot turn back the clock to save this animal, the administration can stop the U.S. from further contributing to the demise of this species by refusing future import permits of black rhino trophies.”

Black rhinos number approximately 5,500 and are considered a critically endangered species by the International Union for Conservation of Nature. About half of the plant-eating mammals live in Namibia, which allows only five male rhinos a year to be legally killed by hunters, the Associated Press notes.

In recent years, the black rhino population has steadily increased, thanks in part to stringent conservation management. In light of that growth, both the Obama and Trump administrations issued import permits for black rhinos. During Obama’s term, three permits were granted. Trump’s administration has issued two. “

Why can’t we leave these endangered species alone!