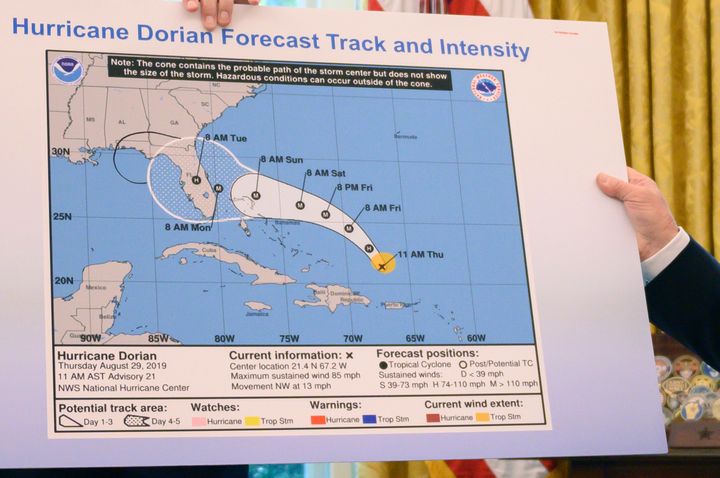 On Trump’s map, someone appears to have used a Sharpie marker to crudely extend Dorian’s “cone of uncertainty” to indicate the hurricane could hit Alabama.

President Donald Trump’s use of an outdated and crudely altered weather map in an attempt to avoid responsibility for making false claims about Hurricane Dorian’s path is “literally pathetic.”

So says South Bend, Indiana, Mayor Pete Buttigieg, who’s running for the Democratic presidential nomination. Yesterday, Buttigieg told CNN’s Alisyn Camerota that he feels sorry for the president, given that he, or someone in his office, would feel compelled to go so far to protect Trump’s ego.

“I feel sorry for the president,” Buttigieg said Thursday, reflecting on the matter. “And that is not the way we should feel about the most powerful figure in this country, somebody on whose wisdom and judgment our lives literally depend.”

On Wednesday, Trump presented an outdated, week-old weather map from the National Oceanic and Atmospheric Administration that predicted Dorian would likely make landfall on Florida’s east coast. On Trump’s map, someone appears to have used a Sharpie marker to crudely extend Dorian’s “cone of uncertainty” to indicate the hurricane could hit Alabama:

The alteration appears to be an attempt to defend a statement the president made Sunday, in which he warned via a tweet that Alabama was among the states that would “most likely be hit (much) harder than anticipated.”

It’s a puzzling claim since NOAA models had by Friday begun to indicate Dorian could take a more northerly path. (The National Weather Service corrected Trump’s erroneous prediction Sunday with a tweet of its own.)

Instead of admitting the mistake, the president grew more adamant about his falsehood Thursday morning and tweeted:

“Alabama was going to be hit or grazed, and then Hurricane Dorian took a different path (up along the East Coast). The Fake News knows this very well. That’s why they’re the Fake News.”

“What we’re seeing there is literally pathetic,” Buttigieg said later. “It makes you feel a kind of pity for everybody involved. And that’s not how I want to feel about the president, whether it’s from my party ― or another one.”

“This is humiliating,” he added. “This is an embarrassing moment for our country, and we seem to see a new national embarrassment every day.”

The president is indeed an embarrassment everyday.  Call it like it is, Pete!