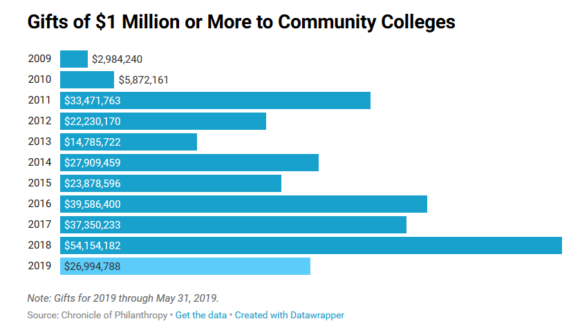 Major gifts to community colleges have been growing sharply during the past ten years (see graphic above). The Chronicle of Philanthropy is reporting that big gifts to community colleges have grown from a single donation of only $2.5 million in 2009 to contributions totaling $53.1 million last year.  And things are looking good so far for 2019, with $27 million already given or pledged as of May.  As reported:

“Over all, U.S. philanthropists have given more than $271 million to community colleges since 2009.

Wealthy donors are giving more million-dollar gifts to two-year institutions for a multitude of reasons, said Martha Parham, senior vice president for public relations for the American Association of Community Colleges and a former community-college fundraiser.

The soaring cost of tuition at four-year institutions likely also plays a role.

Community colleges saw a burst of interest from big donors in the mid-2000s, peaking at $30.6 million in 2007 before declining precipitously over the next two years, during the recession.

Even with the recent renewed interest in giving to community colleges, their haul remains modest compared with the largess showered on universities. For example, four-year colleges and universities have received a total of $2 billion from wealthy donors so far in 2019.

Still, as university tuition costs rise and community colleges become more attractive to some students, donors are taking notice. Community colleges today serve 41 percent of all undergraduates in the country, and they do so at about one-third the cost of a four-year public institution for in-state students, according to Parham. However, many community colleges are facing cuts in state support, so community-college fundraisers and leaders are working harder to raise money from private donors.

“Community colleges are feeling the same state funding challenges as other state entities, so our presidents have become much more focused on fundraising,” said Parham. “It’s become more a part of what they’re expected to do and a necessary skill set for them to have now.”

While community-college leaders are competing with universities to attract the attention of wealthy donors, the unique role the colleges play in work-force education has been touted in recent years by both the Obama and Trump administrations as a path to increasing the number of graduates to shore up the U.S. work force in the coming years, Parham noted. Some high-net-worth donors are responding.

In March, the Denver banker Donald Sturm and his wife, Susan, pledged $10 million to Arapahoe Community College to create the Sturm Collaboration Campus at Castle Rock, an effort to provide a combination of educational and work-force programs in a variety of fields.

The college is working closely with Colorado State University, the Douglas County School District, and the town of Castle Rock, Colo., to create programs in cybersecurity, secure software development, business, accounting, entrepreneurship, and health care. Students’ schedules will be designed to make it easier to work while they attend college.

Sturm is not an Arapahoe alumnus. He earned degrees at City College of New York, New York University, and Denver University College of Law. While he and his wife gave a few small gifts to Colorado community colleges over the years, Sturm said that until now, the couple primarily directed their multimillion-dollar donations to large institutions. The potential to help so many types of students in collaborative programs at Arapahoe was an exciting prospect.

Sturm said he first learned about the effort when Arapahoe officials approached him about buying land he owned for the new campus and was immediately attracted to it because it could serve so many types of students and provide a pipeline to job-skills training or higher education to students in the Douglas County, Colo., school system.

“It kind of lets anybody and everybody who wants to go to school to learn something go there,” said Sturm. “You can learn a trade; you can work toward a four-year program through the collaboration with Colorado State. So it’s a major undertaking and a major opportunity to affect a lot of lives positively, and that’s really what we want to do.”

A similar impulse, but one solely focused on work-force training, inspired members of the band Metallica to give $1 million late last year through the group’s All Within My Hands Foundation to launch Metallica Scholars, a program aimed at supporting community-college students who want to pursue careers in a traditional trade or direct their studies toward other types of applied-learning programs.

“This isn’t necessarily for someone who needs a two-year degree; it’s for somebody who needs maybe three or six months of training to get some kind of certificate in welding or some other trade and provide them with the support they need,” said Edward Frank, a Bay Area technology entrepreneur who leads the All Within My Hands Foundation, which has $2.7 million is assets, according to its most recent tax forms.

Working with the American Association of Community Colleges, the Metallica Scholars program is distributing $100,000 apiece to 10 community colleges and providing assistance to more than 1,000 students, Frank said. The band is considering whether to expand the program over time, he added, and hopes to get its fans and local businesses to support the effort.

The band members, who have directed most of their charitable giving to food banks in the cities and towns where they perform, see the program as a way to deepen their support beyond basic needs and use their foundation to help people improve their lives long-term, said Frank, a member of the National Academy of Engineering who helped the group develop the program.

“Our core idea is let’s try and do something related to sustainable communities and do our part to help people get good jobs and the training they need to work in local industry,” said Frank. “We hope this helps people who may be earning minimum wage double or triple their income as a result of getting the skills training they need.”

Community colleges are a uniquely American education treasure serving students with the greatest needs.  It is good to see philanthropists recognizing the value of their contribution.