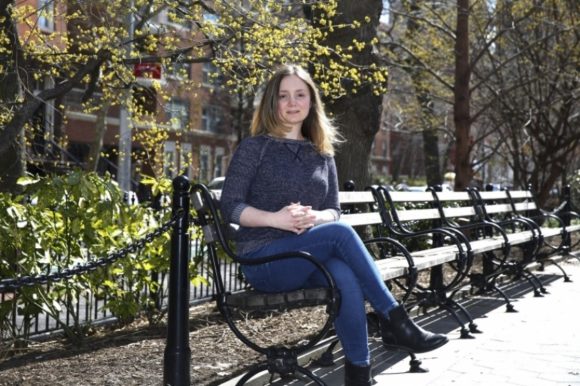 Alice Goffman is an assistant professor of sociology at the U. of Wisconsin at Madison who was denied tenure this past semester even though she wrote one on the most widely read sociology books, On the Run: Fugitive Life in an American City.   Her account of young black men caught up in the criminal-justice system became entangled in ethical controversies.  James Raymo, chair of the sociology department, would only comment that the department did not recommend Goffman for promotion to associate professor with tenure. Goffman, he said, did not appeal. Professors in her situation can continue at the university for one year, and she remains at Wisconsin.  As reported in The Chronicle of Higher Education:

“The decision is a low point in the seesaw trajectory that has turned the Goffman into a symbol of some of the thorniest dilemmas of academic life. Should privileged, white outsiders tell the stories of poor minority communities? Can scholars guard research subjects’ privacy while satisfying the growing demand for data transparency? Should students be empowered to block the hiring of scholars whose work they abhor?

Goffman entered sociology with heightened expectations. Her father, Erving Goffman, was one of the defining sociologists of the 20th century. The influential urban ethnographers Elijah Anderson and Mitchell Duneier nurtured her rise as an undergraduate at the University of Pennsylvania and later as a doctoral student at Princeton.

Goffman’s On the Run, (University of Chicago Press, 2014) rested on six years of immersive fieldwork in Philadelphia. Journalists and scholars acclaimed it as a classic. A paperback edition, issued by Picador, sold about 30,000 copies, according to the publisher. Goffman’s TED talk has been viewed nearly two million times.

But that fame made Goffman’s work the target of intense scrutiny. Legal scholars questioned whether she had embellished parts of her book and accused her of committing an apparent felony while researching it. Others said her book presented a warped view of black life and might harm its subjects. When Pomona College hired Goffman as a visiting professor, some students demanded that the college revoke the offer.

Sociologists had mixed reactions to Wisconsin’s tenure decision. Some were unsurprised given what seemed to be an insufficient publication record beyond her dissertation-turned-book.

But Colin Jerolmack, an ethnographer and friend of Goffman’s who teaches at New York University, worried that Wisconsin’s decision could dampen students’ enthusiasm for time-intensive ethnographic field research.

“A number of my graduate students have asked me, ‘Well, jeez, like, I aspire to do what she did,’” he said. “‘To write a book that got a lot of attention and was seen by senior scholars as really important work. And if she gets all of that and doesn’t get tenure, what should I do? Should I think about doing other kinds of work aside from ethnography?’”

Marc Parry, the reporter for The Chronicle, stated that Professor Goffman did not respond to email or phone messages.  And much of the rationale for the University’s decision is veiled behind the confidentiality of tenure procedures.