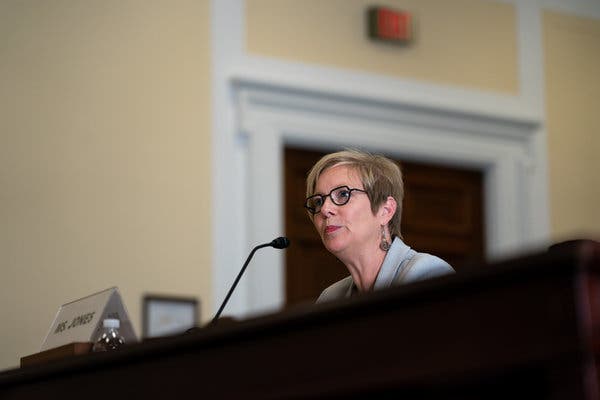 Ten years ago Diane Auer Jones resigned as an assistant secretary for postsecondary education in the George W. Bush administration, after protesting the department’s treatment of an accreditor that oversaw religiously affiliated, liberal-arts colleges. Department officials saw accountability in their crackdown; Ms. Jones saw bias against a gatekeeper for nontraditional college degrees.

Now, as the chief architect of Education Secretary Betsy DeVos’s higher education agenda, Ms. Jones is leading the charge to overhaul the accreditation system, and, to critics, revive the fortunes of for-profit organizations that operate low-quality education programs that have a track record of shortchanging students and taxpayers.  As reported in The New York Times:

“The fact that Ms. Jones went on to work for some of those institutions after she resigned has made her perhaps the most controversial appointee at the Education Department.

“President Trump’s Department of Education is stacked with former for-profit executives whose companies got rich by ripping students off,” said Charisma L. Troiano, the press secretary for Democracy Forward, a government watchdog organization that has accused Ms. Jones of several conflicts of interest. “For decades, Diane Auer Jones has advocated for this predatory industry.”

Ms. Jones has proposed a significant rewrite of rules that would loosen the federal government’s reins on accreditors, largely invisible but critical watchdogs whose stamp of approval serves as an education institution’s lifeline to millions of dollars in financial aid.

The rules would make it easier for accreditors to be recognized by the Education Department to oversee institutions, and afford them more flexibility in how they manage programs. They would also relax departmental standards for measuring accreditors’ performance, and potentially allow them to take years to penalize troubled schools. The rules would strengthen the role that accreditors have in preventing abrupt school closures, and extend federal funding to troubled schools longer to allow students to make other plans.

The new regulations are expected to be published as early as this week for public comment.

The rules would deliver on Ms. DeVos’s promise to deregulate higher education to foster innovation and competition among institutions, particularly for-profit colleges and career-education programs, that serve a vast and diverse population.

For Ms. Jones, they also reflect unfinished business. After she left the department, she joined the board of the American Academy for Liberal Education, the religious-school accreditor that prompted her resignation, where she railed against the Education Department’s accreditation process.

In the Trump administration, she has found exoneration. When the accreditation rule-making session ended, with negotiators reaching a rare consensus, in April she popped champagne in the negotiating room. She trumpeted that the rules cut down on “bureaucratic minutiae that distracts institutions from students.”

Consumer protection advocates see the rules as part of a larger plan to allow Ms. Jones’s allies in the for-profit industry to proliferate and operate with few guardrails. Some of the proposals reflect wish lists that for-profit and career schools have lobbied for in Congress. They throw a safety net to accreditors and programs that have struggled to meet departmental standards.

“The proposed regulations cut any serious oversight of colleges off at the knees,” said Clare McCann, the deputy director for federal policy at New America, a policy research group. “Bottom-feeder colleges will be able to keep enrolling students and pulling in taxpayer dollars for years, and it will be nearly impossible for the Education Department to take action against failing accreditors.”

Some higher education experts have been supportive but cautious. Terry Hartle, a vice president at the American Council on Education, an association representing more than 1,700 colleges and universities and related organizations, said the accreditation rules were “important, incremental movements” that have been long desired by a range of institutions. He served on the committee of department-appointed negotiators, including department officials and consumer protection and higher education representatives, and said the rules would allow high-quality institutions to experiment in new ways.

Mr. Hartle, who has known Ms. Jones for more than a decade, said he believed allegations that the rules were designed to benefit flailing for-profits was an “easy answer.” “Diane is extremely knowledgeable and she’s always been a professional,” he said.

What opponents and proponents can agree on is that none of the changes are as contentious as Ms. Jones herself.

As principal deputy under secretary at the Education Department, Ms. Jones is seen as the mastermind behind Ms. DeVos’s most criticized decisions, including the rollback of two major Obama-era regulationsthat sought to protect students from predatory practices by for-profit institutions.

She also recommended the reinstatement of a scandal-plagued accreditor, Accrediting Council for Independent Colleges and Schools, known as A.C.I.C.S., which the Obama administration sought to banish after the collapse of two for-profit chains, ITT Technical Institute and Corinthian Colleges, which were under its supervision.

In an interview, Ms. Jones rejected such characterizations and said she took her cues from Ms. DeVos.

Although her ethics forms have been cleared, Ms. Jones has frustrated advocates and Democrats by repeatedly rejecting their calls to recuse herself from policymaking that could benefit her former employers.

In addition to serving on the board of the American Academy for Liberal Education, she was also an executive at Career Education Corporation — where she lobbied against the regulations she is seeking to revise. The company is one of the largest for-profit operators in the nation and settled multistate, yearslong investigationsover accusations that it misled students with inflated job-placement rates. The majority of the company’s campuses were accredited by the Accrediting Council for Independent Colleges and Schools.

Ms. Jones said she is not concerned with making the company money. She was the one who reported the improprieties found at its schools to the schools’ accreditor and the Education Department, she said. The corporation’s financial records show it lost millions during her tenure.

Ms. Jones’s recommendation to reinstate the accrediting council, which is now struggling financially, is under investigation by the Education Department’s inspector general. This week, students from Virginia College, a chain of for-profit schools, sued Ms. DeVos saying that the reinstatement led to their colleges’ demise.

She denies allegations that there was anything nefarious behind the decision to reinstate the accrediting council, which was prompted by a judge ordering the department to review the Obama administration’s decision to banish the accreditor.

Ms. Jones answered bluntly when asked why she refused to recuse herself from the decision to avoid perceived conflicts: “It was my job. There are only a few of us at the department who know accreditation as well as I do.”

Ms. Jones epitomizes the education-industrial complex that allows unscrupulous individuals to gravitate to major policy positions that benefit previous employers and in this case, for-profit colleges.