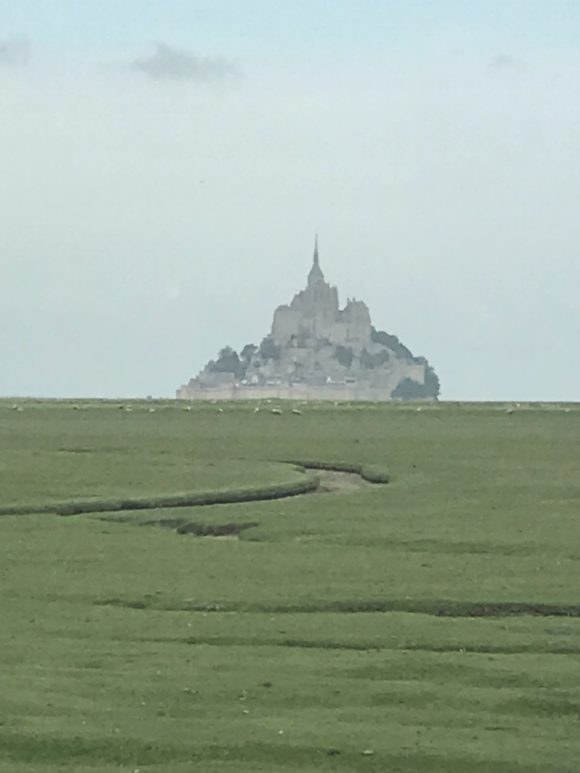 Mont-Saint-Michel in a Distance

Today we traveled to Mont-Saint-Michel, one of Europe’s most interesting sights and second only to the Eiffel Tower as France’s most popular tourist attraction. Located in the bay where Normandy and Brittany merge, the island can be seen from great distances.  An abbey sits atop the island.

The history of how the abbey came to be is based on the 8th century legend of Aubert, bishop of the nearby town of Avranches who claimed the Archangel Michael visited him in a dream and told him to build a church atop the island.

From 966 on wards, the dukes of Normandy, followed by French kings, supported the development of the abbey on Mont-Saint-Michel. Monastic buildings were added through medieval times and the abbey became a renowned center of learning, attracting some of the greatest minds and manuscript illuminators in Europe. At one point in its history the abbey was used as a prison.  The ramparts at the base of the island were built to keep English forces out.  Other buildings went up along the steep village street, now converted into museums, hotels, restaurants and boutiques for today’s tourists.

One of the most interesting features of the island is that it is subject to changes in the tide coming in and out from the English Channel.  The tides can vary as much as 46 feet between highest and lowest water marks. Popularly nicknamed “St. Michael in peril of the sea” by medieval pilgrims making their way across the flats, the Mont can still pose dangers for visitors who avoid the causeway and attempt the hazardous walk across the sands from the neighboring coast.  To understand this better, if you look at the map below, Mont-Saint-Michel extends out from Normandy on a tidal basin like a fist at the end of an arm with the arm completely submerged under water during high tide and walkable, dry sand during low tide. 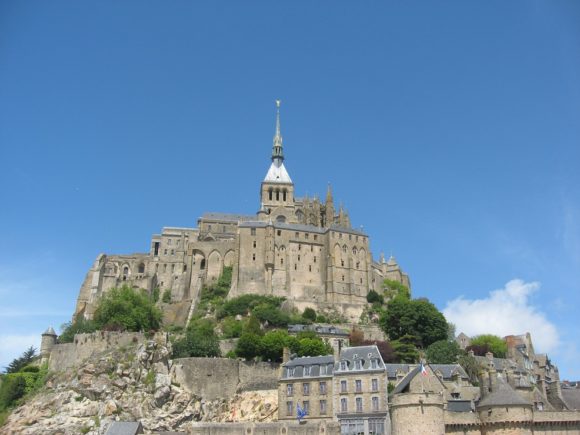 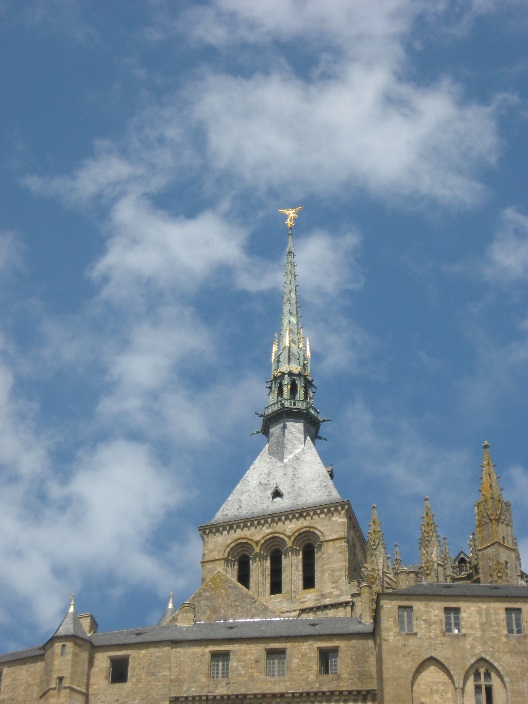 A Statue of the Archangel Michael Sits Atop the Steeple 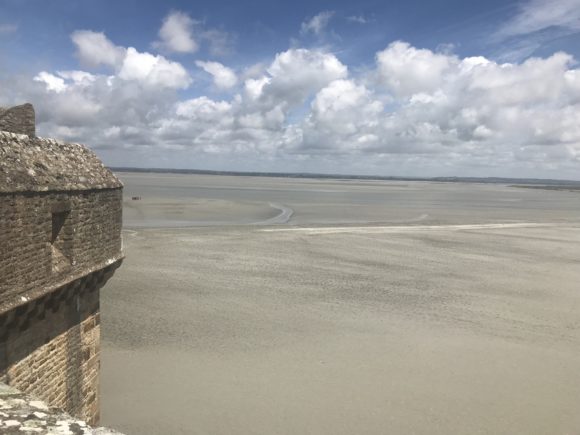 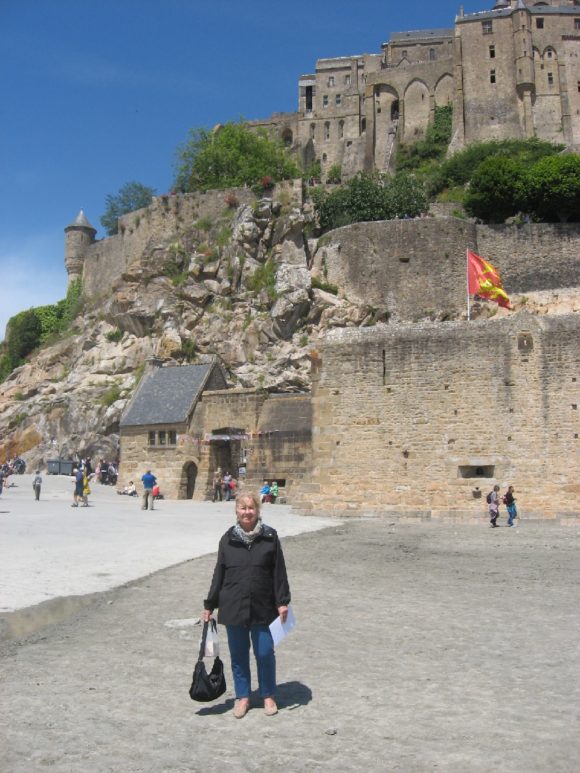 Elaine in the Low Tide Area 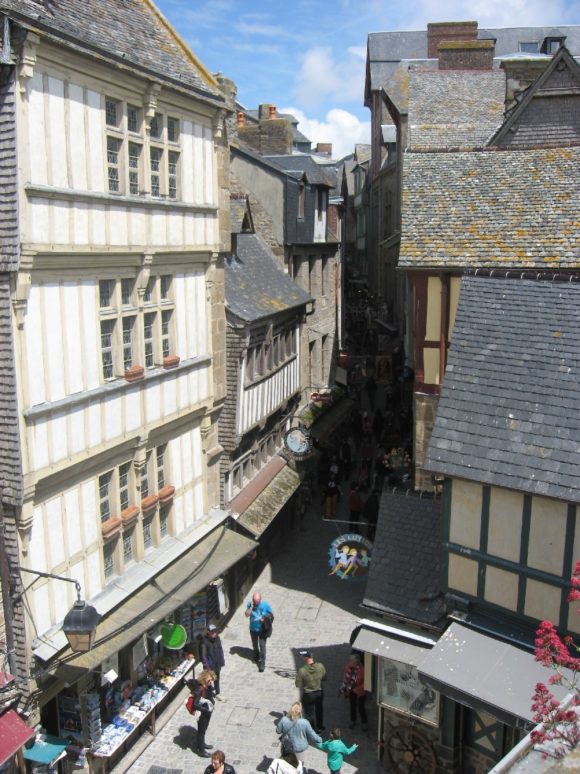 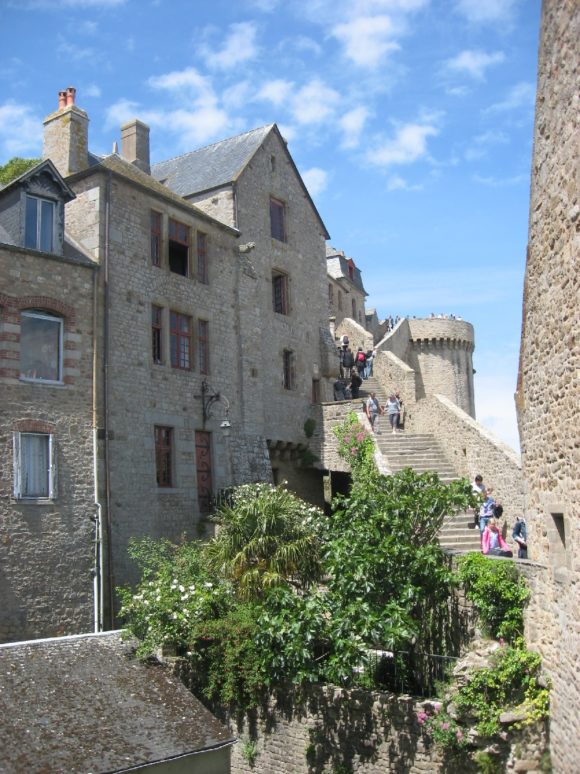 Steps Lead Up to the Top of the Abbey