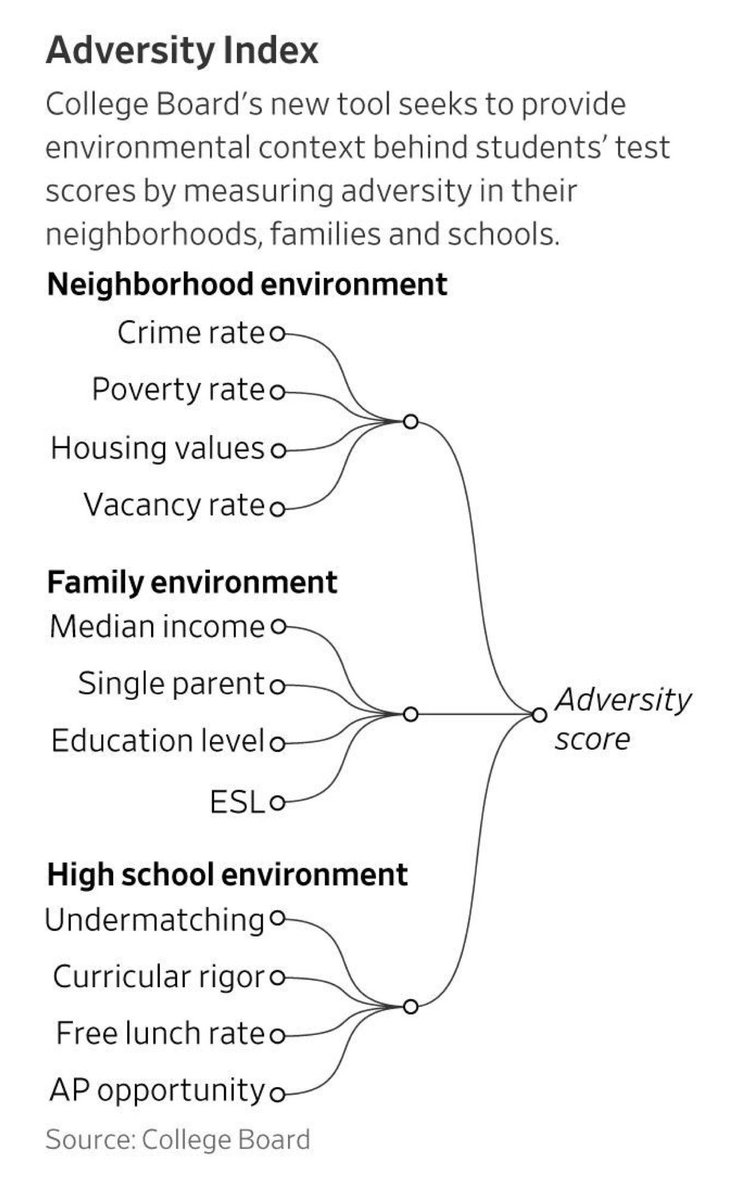 The College Board announced yesterday that the SAT  will be adding  an “adversity score” to test results to help level the playing field for students of diverse social and economic backgrounds, as reported by The Wall Street Journal and The New York Times.

The adversity score numbers will not be reported to the students ― only to college admissions officers ― and will be based on 15 factors, including the crime rate and poverty levels in the student’s home neighborhood, the College Board, the company that administers the test, told the newspapers.

“There are a number of amazing students who may have scored less [on the SAT] but have accomplished more,” David Coleman, chief executive of the College Board, told the Journal. “We can’t sit on our hands and ignore the disparities of wealth reflected in the SAT.”

The organization said the tool was beta-tested by 50 colleges last year and an official version is expected to be used by 150 institutions this fall before expanding more broadly in 2020.

Critics of the SAT and the other main college entrance exam, the ACT, say the tests provide an advantage to privileged students. Though the new tool has been embraced by college admissions officers seeking to diversify their institutions’ student bodies, it could draw backlash from students of white and Asian families who are already achieving higher-than-average scores.

“We’ve got to admit the truth, that wealth inequality has progressed to such a degree that it isn’t fair to look at test scores alone,” Coleman told The Associated Press in April. “You must look at them in context of the adversity students face.”

Renewed scrutiny over the SAT, taken by over 2 million students in 2018, emerged last month when federal prosecutors charged dozens of wealthy parents and college officials in a massive college admissions cheating scam.

The case, known as “Operation Varsity Blues,” accused some parents of paying a college admissions consultant thousands of dollars to fraudulently boost their children’s SAT scores to help them get into elite colleges and universities.

Hundreds of colleges in recent years have decided to make SAT and ACT scores optional in their application process, but that number has sharply risen over the last few months in response to concerns over fairness and inequality.

“The conversation about access to higher education has been simmering for a long time,” David Hawkins, executive director for educational content and policy at the National Association for College Admission Counseling, told the AP.

It’s “starting to take shape in a way that we really are examining every aspect of the admission process to understand fully how it either promotes or inhibits access,” he said.

The Chronicle of Higher Education reported that 50 colleges over the last year have been using something called the Environmental Context Dashboard, which includes an “adversity score” for each applicant who took the SAT. The College Board, which oversees the exam, created the dashboard to give colleges a better understanding of test takers’ socioeconomic backgrounds — and the challenges they may have encountered.

So far, at least some participating colleges report that the dashboard has helped them admit more disadvantaged applicants. David Coleman, the College Board’s chief executive, said in a written statement that the tool “shines a light on students who have demonstrated remarkable resourcefulness to overcome challenges and achieve more with less.” And some admissions officials describe the platform as a promising race-neutral tool that could prove especially useful if the Supreme Court one day strikes down race-conscious admissions policies.

It’s already controversial, though. Robert Schaeffer, public-education director of the National Center for Fair and Open Testing (FairTest), believes that the dashboard undermines the very notion that standardized tests are a common yardstick for comparing applicants. “This latest initiative,” he said in a written statement, “concedes that the SAT is really a measure of ‘accumulated advantage’ which should not be used without an understanding of a student’s community and family background.”

If colleges feel they must use the SAT in their admissions process, adding the adversity score is a move in the right direction!