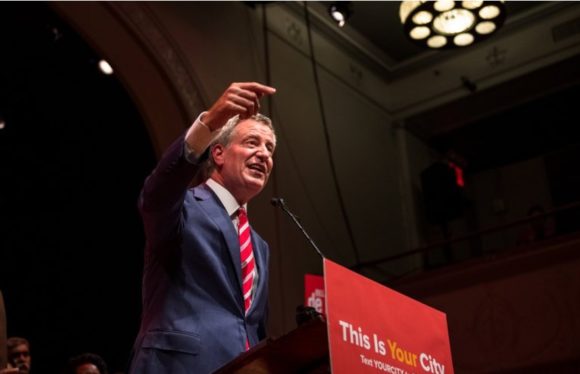 “De Blasio’s Thursday entrance into the race, which was first reported by NBC News, will bring the total number of candidates to 23 with nearly nine months before the first votes are cast.

De Blasio will head out on the trail almost immediately traveling to Iowa and South Carolina on his early itinerary. The two-term mayor, who in 2017 became the first Democrat re-elected to his office in more than three decades, joins the race after months of deliberations and a handful of visits to early states like Iowa and New Hampshire.

Even before he made his plans official, de Blasio has come under fire — and some mockery — from the city’s unrelenting press corps, a group he’s clashed with repeatedly over the years and which openly delights in the mayor’s every misstep or misfortune. Still, his national profile is less defined, and de Blasio, as he introduces himself to Democrats outside New York, is expected to sell a record of progressive policy wins — bolstered by a racially diverse coalition of support — in a city with more residents than the home states of some of his rivals.

As someone who has lived and/or worked my entire life in New York City, I think Bill de Blasio is one of the best mayors we have ever had.  He is a true progressive who has put his money where his mouth is.  Whether a New York mayor can sell his credentials across our diverse country is another thing.