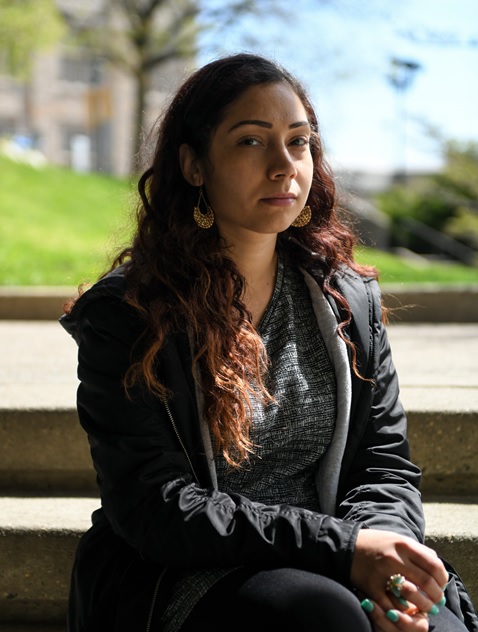 Kassandra Montes lives in a homeless shelter with her son while attending Lehman College in the Bronx.  She budgets $15 per week for food.

Kassandra Montes, a senior at Lehman College (CUNY), is one of them. She unexpectedly had to take out a $5,000 loan this year in order to graduate, she said. Living in a Harlem homeless shelter as she attends classes, Ms. Montes also works two part-time jobs and budgets only $15 per week for food. She uses the campus food pantry to get most of her groceries and usually skips breakfast in order to make sure that her 4-year-old son is eating regularly.

“I feel like I’m slowly sinking as I’m trying to grow,” she said.  As reported in the New York Times:

Although the college food-pantry movement is well underway, as there are now over 700 members at the College and University Food Bank Alliance, efforts have recently expanded to include redistributing leftover food from dining halls and catered events, making students eligible for food stamps and other benefits, and perhaps most important, changing national and state education funding to cover living expenses, not just tuition.

“The hunger movement has been centered around food banks, but that is now changing as people focus on prevention,” said Sara Goldrick-Rab, the founder of the Hope Center and a Temple University professor.

The movement has largely focused on community and state colleges, as there are more low-income students who attend them. Hunger can force students to drop out of school to work more, which inhibits academic success, said Nicholas Freudenberg, a distinguished professor at CUNY’s Graduate School of Public Health and Health Policy. Another ramification is an increase in student loans to cover living expenses, Dr. Goldrick-Rab said. (National student debt now totals about $1.5 trillion.)

Calvin Ramsay amassed “massive amounts of debt” while attending N.Y.U. Being the first person from his family to go to college, he said he didn’t fully understand how much debt he was going into with his student loans. After two years on campus, Mr. Ramsay said he moved back home to Queens and started to use Share Meals, a digital platform created in 2013 that informs students about free food on campus.

“Food was a major obstacle,” he said, “especially in Manhattan.”

Mr. Ramsay said that he will need to borrow about $40,000 more to graduate, but he is unwilling to take on more debt to do so. “Why do I need to go into debt,” he said, “to eat

CUNY has discovered that signing up students for SNAP, or the Supplemental Nutrition Assistance Program, has helped. In 2009, the school system brought in Single Stop USA, a nonprofit that connects individuals with social services. Since then, the nonprofit and other partners have served over 122,000 CUNY students, each of whom have received about $3,000 worth of benefits each year, said Sarah Crawford, the nonprofit’s national education director…

…Boosting federal education funding should be part of the presidential election discussion, said Dr. Goldrick-Rab, who cited a higher education plan put out by Senator Elizabeth Warren of Massachusetts, who is running for president.

If no progress is made, Dr. Goldrick-Rab said, “existing investments in financial aid will be undermined as students drop out simply because they don’t have enough to eat.”

Thank you Hope Center… for bringing this issue to our attention!