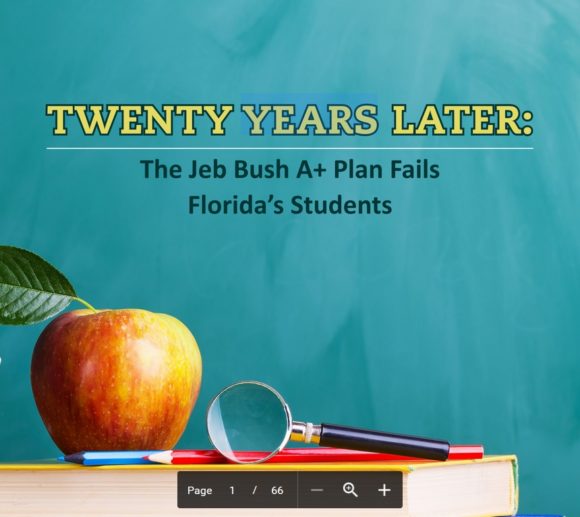 The Network for Public Education (NPE) recently published a new report entitled, Twenty Years Later: The Jeb Bush A+ Plan Fails Florida’s Students, that looks at education policy in Florida over the past two decades.  The report paints a less than flattering picture of vouchers and charter schools that are leading to a “destruction” of its public education system.  Here is a blurb from NPE.

“This week the Florida legislature added yet another voucher program, bringing the total number of programs to five. Florida spends more than one billion dollars on vouchers already.

The deliberate and systematic destruction of public education in Florida began a long time ago. With large numbers of students enrolled in an unstable charter sector combined with growing voucher programs, Florida is poised to be the first state in which public education collapses.

How did this unrelenting attack on public education come to pass? It began in 1998 with former governor Jeb Bush’s introduction of the A+ Plan for reforming education. A new report Twenty Years Later: The Jeb Bush A+ Plan Fails Florida’s Students by NPE Action Board member Sue Legg, Ph.D. traces the history of the Jeb Bush A+ reform movement, and documents why a test driven curriculum, supported by school grades and school choice, has failed to raise student achievement while undermining public education at every turn.

The report serves as a valuable resource not only for the Florida public, but as a cautionary tale for all who believe in democratically governed, public schools.