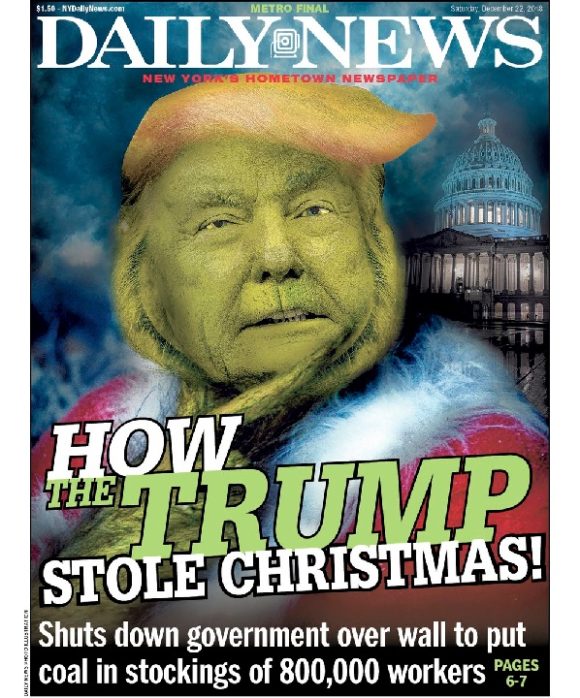 It could be that his head wasn’t screwed on just right.

It could be, perhaps, that his shoes were too tight.

But we think that the most likely reason of all may have been that his heart was two sizes too small.

The New York Daily News captured the essence of President Trump’s demeanor during negotiations last week likening him to the Grinch who stole Christmas. The Trump shutdown began at 12:01 a.m. yesterday and affects roughly one-quarter of the federal government, depriving 800,000 workers of their pay.  Below is the latest regarding negotiations courtesy of the New York Times:

“As the White House and Democrats remained locked in a standoff over funding for President Trump’s border wall, Senator Mitch McConnell, the Republican leader, sent his colleagues home for the Christmas holiday on Saturday, virtually ensuring that the government will remain partially shuttered for at least several more days.

Mr. McConnell’s adjournment of the Senate until Thursday came after a frenzied day of negotiations in Washington and conflicting signals from the White House.

Mr. Trump is demanding $5 billion for the “big, beautiful wall” he promised to build at the southern border, and in a conference call with reporters, administration officials insisted that he would accept nothing less. But even as they spoke, Vice President Mike Pence was on his way to the Capitol to present an offer to the top Senate Democrat, Chuck Schumer of New York.

Those talks, however, appeared to make little headway. Mr. Pence was tight-lipped as he left Mr. Schumer’s office — “We’re still talking,” he said — while a spokesman for Mr. Schumer, Justin Goodman, pronounced the two sides “very far apart.” Mr. McConnell then announced the Senate’s adjournment and left the Capitol to fly home to Kentucky for the holiday.

With lawmakers cleared out of Washington and no end to the impasse in sight, some speculated that it would be left to Democrats to reopen the government when they take over the House next month. In an interview Saturday morning, Representative Nancy Pelosi of California, the Democrats’ nominee to be speaker, vowed that they would do just that.

“We have certainty,” Ms. Pelosi declared. “We will end this the first week in January.”

I hope Ms. Pelosi is right and may Trump find coal in his stockings on Christmas.