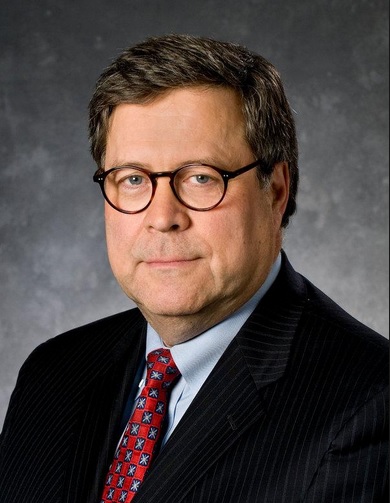 The New York Times is reporting this morning that President Trump intends to nominate William P. Barr, who served as attorney general during the first Bush administration from 1991 to 1993, to return as head of the Justice Department.

“He was my first choice since Day 1,” Mr. Trump told reporters as he walked from the White House to a helicopter for a trip to Kansas City, Mo. “He’ll be nominated.”

Mr. Trump’s focus on Mr. Barr, who supports a strong vision of executive powers, had emerged over the past week following the ouster last month of Jeff Sessions as attorney general and the turbulent reception that greeted his installation of Matthew G. Whitaker as the acting attorney general. Barr is 68 years old and was born and raised on the Upper Westside of Manhattan here in New York City.  He has degrees from Columbia University and George Washington University.  He is married and has three daughters.

Barr’s appointment at the Justice Department is one part of a larger staff shake-up underway.

Mr. Trump also announced that Heather Nauert, the chief State Department spokeswoman, is his pick to be the next ambassador to the United Nations.

In addition, John F. Kelly, the White House chief of staff, is likely to leave his post in the next few days, ending a tumultuous 16-month tenure still among the longest for a senior aide to Mr. Trump, two people with direct knowledge of the developments said Friday.

Mr. Kelly and Mr. Trump have grown weary of each other. But Mr. Trump, according to several senior administration officials and people close to him, has so far been unable to bring himself to personally fire a retired four-star military general.

It is unclear who the replacement for Mr. Kelly would be. Nick Ayers, the vice president’s chief of staff, is seen as a leading candidate. He is supported by Jared Kushner and Ivanka Trump, the president’s son-in-law and daughter, who both serve as senior West Wing advisers and who, according to several officials, are trying to expand their influence internally and in the re-election campaign.

The White House senior staff meeting on Friday morning was canceled, according to three officials. But there is a holiday senior staff dinner scheduled for Friday night, and people said they expected Mr. Kelly to be there.

Mr. Barr will have to be confirmed by the Senate.

On Thursday, as expectations swelled that Mr. Barr had emerged as the front-runner for the nomination, Senator John Cornyn of Texas, the No. 2 Senate Republican, called Mr. Barr a “very good choice” and predicted that Republicans would be able to secure the votes needed to confirm him — one of the highest potential hurdles for any Justice Department nominee given the ongoing special counsel investigation.

“He is the kind of person who could get confirmed,” he said. “I think it is going to be challenging in any event.”

Mr. Barr has criticized aspects of the Russia investigation, including suggesting that the special counsel, Robert S. Mueller III, hired too many prosecutors who had donated to Democratic campaigns. Mr. Barr has defended Mr. Trump’s calls for a new criminal investigation into his 2016 opponent, Hillary Clinton, including over a uranium mining deal the Obama administration approved when she was secretary of state.

Mr. Barr added then that he saw more basis for investigating the uranium deal than any supposed conspiracy between Mr. Trump’s associates and Russia. “To the extent it is not pursuing these matters, the department is abdicating its responsibility,” he said.

This is shaping up to be quite a day for Washington, D.C. news.  The media is anxiously awaiting Special Counsel Robert Mueller’s memoranda on Paul Manafort and David Cohen that are due later today.