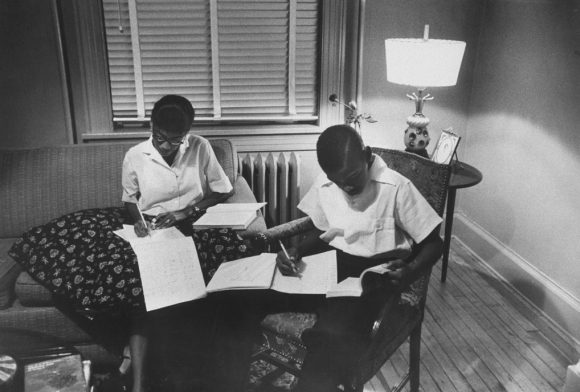 African-American students studying at home while Charlottesville schools were closed in 1958.

The New York Times has a featured article today examining the Charlottesville, Virginia schools.  Charlottesville’s racial inequities mirror many school districts across the country in areas such as gifted programs and school discipline that can undercut the effort to prepare equitably students for college.

Charlottesville greeted the Supreme Court’s 1954 Brown v. Board of Education desegregation decision with a firm no. In 1958, Gov. J. Lindsay Almond of Virginia ordered the city to shut down two white-serving public schools rather than integrate.

Many white families opted for private schools, which were able to secure public funding through voucherlike tuition grants. Under pressure from the Supreme Court of Virginia, Charlottesville reopened its schools in 1959, allowing a dozen black students to attend its historically white schools.

After a federal appeals court invalidated the district’s attendance policies, the city relied more closely on residential zones to sort students. In 1984, Charlottesville High School ignited after its student newspaper published derogatory remarks about black students. The high school was shut down for a day. “Seniors for White Supremacy” was painted in its parking lot.

Two years later, the board considered redrawing school zones to bolster racial and economic equity, but worried about white flight. In the end, elementary school boundaries were largely left alone. The district pooled the city’s middle school students into two schools, one serving all fifth and sixth graders, and the other serving all seventh and eighth graders. The number of white students declined about 20 percent within a decade.

Venable has the highest reading proficiency of all of the elementary schools in the city. The black families lived several blocks from Venable, and they had grown frustrated by their children’s long commutes to their zoned school. But when the school board proposed reassigning the 20 children, white parents from Venable “freaked,” said Dede Smith, then a board member.

“We will NOT accept redistricting when it is done, as in this situation, sloppily and hurriedly and in a way which negatively impacts the quality of education for all students involved,” read a letter from the Venable parent-teacher organization. It took a year for the board to rezone the children to Venable, according to Ms. Smith. Today, some black families are able to send their children there, but residents of a mostly black public housing complex nearby are not among them.

“We only put our toe in the water,” she said.

The next year, in 2004, the school board hired Scottie Griffin as superintendent. She tapped a respected education association to review inequities across the district. The report, by five academics, revealed a deeply fractured school system.

“While some members of the community might wish for an elongated period of time to ponder and debate changes, the children are in school only once and then they are gone,” the audit concluded. “No city can survive by only serving one-half its constituents well. The future of such a legacy is dire.”

Kathy Galvin, a parent who is now a City Council member, responded to the audit in an internal memo to the school board, urging the board to reject the racial bias findings, which she called “unnecessary and in fact harmful,” and implored members to focus on improving “our educational system for the benefit of all children.”

Today, Ms. Galvin largely stands by that position. “A ‘too narrow and racially biased’ focus on the schools does a disservice to the dedicated educators who have made a difference and risks misdiagnosing a complex problem, leading to ineffective solutions,” she said.

In 2005, within a year of her hiring, Dr. Griffin was pushed out. She did not respond to questions from The Times and ProPublica.

Dr. Atkins said she has incorporated some of the audit’s recommendations, such as data-driven decision-making and a reorganization of central office staff, into the district’s strategic plan.

One of the audit’s central focuses was the city’s gifted program, known as Quest. As white enrollment in the city’s schools contracted over the years, the program tripled in size, according to an analysis by a University of Virginia researcher, largely benefiting the white families who remained.

To black families, segregation had returned by another name.

“Everyone wants the best for their kid, but this has been the thing that has helped drive the segregation engine,” said Lisa Woolfork, an associate professor at UVA and a member of Black Lives Matter Charlottesville, whose children attend Charlottesville schools. “I have always been of the opinion that this type of internal segregation is the way to keep white people in the public schools. This is a way that white supremacy undergirds the public school system.”

The article goes on to comment on other disparities in the school system and concludes with a quote from , a black high school student:

Zyahna’s [black student] achievements make her a prime candidate for an elite university, so she was taken aback when, as she was beginning her search, her principal encouraged her to explore community college. The principal says the context was a broad discussion with black student leaders about community college as an affordable option.

That is not how Zyahna heard it.

“No matter how high your scores are or how many hours you put into your work, you are still black,” Zyahna said. “There’s a whole system you’re up against. Every small victory just cuts a hole into that system reminding you how fragile it is. But it’s still there.”

An important article worth a read to understand where we have come in this country regarding school segregation and how far we have to go in many districts including here in New York City.