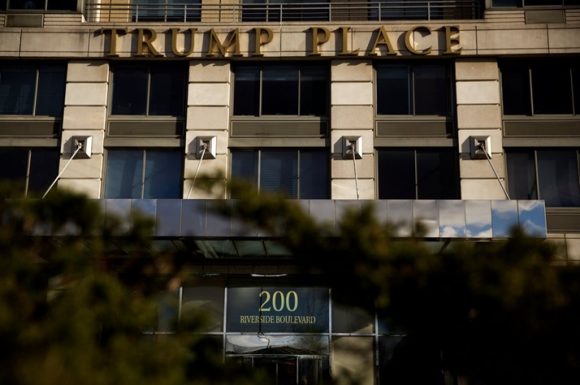 The building at 200 Riverside Boulevard bought the right to use the Trump name in 2000.

Last week, the majority of tenants voted to “remove the signage.”

Last week, the majority of tenants at 200 Riverside Boulevard on the West Side of Manhattan voted to have the name “Trump Place” removed from its entrance.  They join the owners of several other buildings who want Trump’s name removed from their premises.  The New York Times this morning reviewed the details of the change at 200 Riverside.  See excerpt below.

Liberal Upper West Siders Get Their Revenge: Trump Place Sign Is Coming Down

Few places in the United States are more staunchly liberal than the Upper West Side of Manhattan. And so few things are more galling to many residents of a residential complex there than the big letters that greet them at their building: T-R-U-M-P P-L-A-C-E.

On Thursday, condo owners will join three neighboring buildings in finally getting their relief.

Residents at other Trump-branded condominiums in New York, Stamford, Conn., and Chicago have considered taking similar actions since Donald J. Trump plunged into the presidential race, but they’ve been stymied by a lack of support and fears of costly litigation or a drop in the value of their homes. The challenge of untangling the licensing agreements signed with the Trump Organization has also been an obstacle.

The condominium at 200 Riverside Boulevard, however, figured out a way.

The building bought the right to use the Trump name in 2000, paying $1 under a four-page licensing agreement signed by Mr. Trump. But the sentiment about having his name over the front door changed during Mr. Trump’s campaign. Many residents sought to distance themselves from his politics.

For some, the once ubiquitous Trump brand, which adorned apartment buildings, hotels, casinos, golf courses, steaks, suits and water, does not have the same appeal it used to have before Mr. Trump’s political career.

Eric Chung, a longtime resident of 200 Riverside Boulevard whose family owns two units in the building, said that he had been concerned about the cost of litigation and the fate of the building’s “great employees.” But after a court decision and a recent survey of the owners in the building, the majority of whom wanted the name taken off, he said that removing the Trump letters “makes a very powerful statement.”

Eric Trump, who has assumed a leading role at the Trump businesses, declined to comment on Wednesday.

In Manhattan, there were 15 residential buildings that bore the Trump name in 2015. The next year, a trio of neighboring rental apartment buildings just to the south of 200 Riverside Boulevard pulled the name off their facades, the lobby rain mats and employees’ uniforms after 300 people signed an online petition titled, “Dump the TRUMP Name.”

“We were driven by our intense feelings about Trump himself,” Linda Gottlieb, a resident at one of the Trump-branded apartment buildings, said in a recent interview. “We would not have stayed in the building we felt so strongly about it. We just renewed our lease for two years.”

Business has remained steady or declined at some Trump-branded hotels, as well as at the city-owned golf course, carousel and ice skating rinks operated by the Trump Organization in New York City.

The push to remove the Trump branding from 200 Riverside Boulevard began in 2017. In response to concerns raised by some of the 377 condo owners, the condo board began discussions of possibly removing the Trump name from the building’s facade.

That February, 63 percent of the unit holders who responded to an informal poll favored removing the “Trump Place” letters on the building.

But a month later, Alan Garten, chief legal officer of the Trump Organization, sent a letter to the board promising a lawsuit if it did, saying the company would seek “significant amounts of damages, costs and attorney’s fees.”

The prospect of expensive litigation with the Trump Organization scared many residents, and a small group vigorously opposed excising the Trump name.

An internal message board for residents showed that division.

“I am adamant that the sign should remain on the building,” a resident wrote. “We bought in the building with it. There is no reason to take it down.”

Another wrote: “Arguably, at one time the Trump name may have contributed something to the value of our apartments. That is clearly not the case today.”

After overcoming some internal divisions, the condo board devised a low-key strategy with its lawyer Harry W. Lipman: It would ask the State Supreme Court for a declaratory judgment that it was not required to retain the Trump name under the building’s licensing agreement. The agreement required that the condo maintain the building on par with “superluxury condominiums,” but it did not mention any requirement that the Trump name remain in perpetuity.

In May, the judge ruled in favor of the condo owners, saying that the agreement does not require owners “to use the identification ‘Trump’ on the facade of the premises.” She firmly rejected claims by Trump lawyers that the building is required to use the name “in perpetuity.”