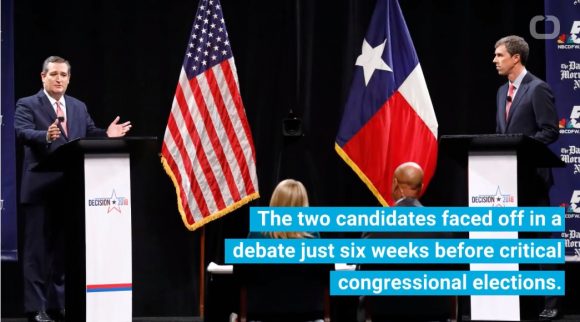 Republican incumbent Texas Senator Ted Cruz and his Democratic challenger Beto O’Rourke held their first debate last night and clashed over ‘Jim Crow,’ Immigration and U.S. Supreme Court nominee Brett Kavanaugh.  Recent polls have indicated that the race is a tossup. On Tuesday, a poll by Quinnipiac University showed Mr. Cruz leading Mr. O’Rourke by nine percentage points among likely voters surveyed by phone. On Wednesday, an online poll by Reuters and others put Mr. O’Rourke ahead of Mr. Cruz by two percentage points among likely voters, the first poll that has had Mr. O’Rourke in the lead.

As reported by NBC News:

“In the fiery first debate between GOP incumbent Sen. Ted Cruz and Democratic Rep. Beto O’Rourke, the differences couldn’t have been more clear.

There was virtually no common ground, on anything. And they didn’t hesitate to get in each other faces.

Cruz hammered O’Rourke, who represents the border town area of El Paso, over his support for undocumented immigrants, known as “Dreamers,” or children who were brought to the United States as children.

During the face off at Southern Methodist University before a live audience in Dallas, O’Rourke said he wants to provide a pathway to legalization for undocumented immigrants and attacked Cruz for pushing to deport all them, including Dreamers. Cruz then boiled down his position to the audience in four words: “Legal good, illegal bad.”

The race between Cruz and O’Rourke is regarded as surprisingly competitive for a Democrat in a red state — Texas hasn’t elected a Democratic Senate in 25 years — and it’s garnering national attention. This week, the authoritative Cook Political Report rated the contest as a “toss up.”

The candidates, answering questions from two reporters from NBC 5 and The Dallas Morning News, also clashed over the controversy involving football players kneeling during the National Anthem to protest police-involved shootings of unarmed black men. President Donald Trump has repeatedly condemned the kneeling as disrespectful.

Cruz said he also found the protests to be offensive and added that he believed there are better ways for players to protest injustice. But O’Rourke likened the protests to the civil rights movement and said he supported the players.

Cruz tried to paint O’Rourke as anti-law enforcement for his beliefs, and claimed his opponent had called police “modern day Jim Crow,” which O’Rourke denied.

The debate also became contentious when the candidates were asked about gun rights, particularly school shootings, such as the Santa Fe, Texas, high school murders in May.

Cruz suggested such shooting are a result of “removing God from the public square” and called for armed guards in schools as a deterrent. He charged that O’Rourke was a Hillary Clinton supporters who wanted to toss out the Second Amendment.

O’Rourke, however, denied he wanted to get rid of the right to own guns but rather sought to make it harder for civilians to access to military-grade weapons.

“Thoughts and prayers are simply not going to cut it anymore, Senator Cruz,” he said.

During the debate, O’Rourke repeatedly sidestepped opportunities to attack Trump, saying he would stand up to the president on some issues and work with him on others after Cruz claimed O’Rourke wanted to impeach the president.

Toward the end, the candidates were asked to say something nice about each other. O’Rourke credited Cruz for being a family man and his public service. Cruz, in turn, offered a backhand compliment by praising O’Rourke for standing up for his beliefs — even if it was for being a socialist like Sen. Bernie Sanders.

“True to form,” O’Rourke said under his breath in response.

The debate was the first of three that have been scheduled.”

This race is one to watch!