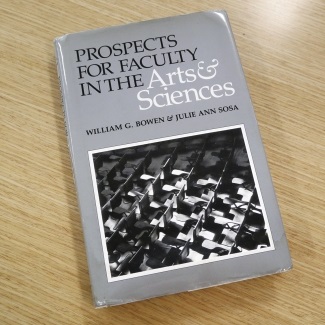 The Chronicle of Higher Education had an article earlier this week lamenting the sad state of the job market for those with Ph.D.s in the humanities.  The article starts with a prediction by the late William Bowen, former president of Princeton University president and head of the Andrew W. Mellon Foundation, who in 1989, issued a study projecting that there would be a major shortage of faculty members starting in the next several years.  He further  projected that there would be “a cascade of openings for secure academic jobs in the years ahead — especially in the humanities.”  For reasons both outside and within higher education’s control, those jobs never materialized. It’s become common for humanities Ph.D.s to face applicant pools of hundreds.  The article comments that “Today the academic job market for budding humanists is a punchline.”

The article also goes on to attribute this state of affairs to the overall decline in public funding for higher education, the adjunctification of higher education, and rising costs forcing many colleges to devote precious resources to areas other than full-time faculty.

Here is an excerpt describing the current situation.

“The Bowen Report remains relevant today because the questions raised by its assumptions ­— and by the failure of its projections — are important and unsettled. How should academics communicate about job prospects to aspiring graduate students? Should universities be better at preparing doctoral students for careers outside academe? Should they be accepting fewer Ph.D. students? How do you change an entrenched culture that defines success narrowly?

The long-term effects of the report lingered well after it became clear that Bowen’s projected faculty shortage would not materialize. By the late 1990s, professors stopped pointing to it as evidence of better times ahead. Meanwhile, the job market kept tightening. Yet students kept pouring into Ph.D. programs, even after the 2008 economic collapse. And universities kept churning out more doctorates.

The mirage vanished. The dream endured.

Take English, for example. According to the Modern Language Association’s Job Information List, the number of assistant-professor job openings in English drastically declined in the 10-year period starting just before the collapse. In 2007-8, there were 879 such jobs. In 2016-17, that number was 320. Meanwhile, non-tenure-track job postings now represent 34 percent of openings in English. Such positions accounted for 21 percent in 2007-8. The pattern is similar in the foreign languages.

During roughly the same period, federal data show that the number of doctoral recipients in the disciplines that feed into English departments remained about the same. The story is the same for all arts-and-humanities disciplines during roughly that same 10-year time frame. In 2006, about 5,300 people received arts-and-humanities Ph.D.s, while roughly 5,500 did in 2016. Despite the tales of woe, which are now everywhere you look in the higher-ed and general press, people keep applying to doctoral programs, and universities keep accepting them. And the academic labor market keeps getting tighter.”

In sum, our universities have to be honest and do a better job of making doctoral program applicants aware of job prospects in their chosen fields.