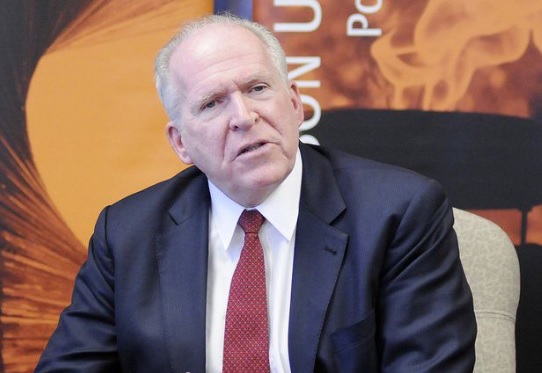 President Donald Trump revoked yesterday the security clearance of John Brennan, former CIA Director and outspoken critic of the Trump presidency.  Brennan gave a scathing response to Trump’s action in an op-ed in the New York Times.  Here is a recap, courtesy of CNBC.

“President Donald Trump cited the ongoing probe into Russia’s attack on U.S. elections in 2016 as a reason he revoked the security clearance of former CIA Director John Brennan, a frequent critic of the president.

In an interview with The Wall Street Journal, Trump made a more direct connection between his action against Brennan and the investigation than he had in a statement released Wednesday. He told the newspaper he believes Brennan is one of the people responsible for special counsel Robert Mueller’s probe.

“I think that whole – I call it the rigged witch hunt – is a sham,” Trump told the Journal on Wednesday. “And these people led it!”

“So I think it’s something that had to be done,” he added, referring to his revocation of Brennan’s clearance.

Trump also told the Journal the investigation is “so badly discredited” but stressed that he isn’t a target of Mueller’s team.

“You know, in theory I’m not under investigation,” the president told the newspaper. “I’m not a target.”

Trump has repeatedly denied colluding with Russia to sway the election.

The president’s originally stated rationale for revoking Brennan’s clearance, in a statement at dated July 26 despite being released Wedmesday, cited “erratic conduct and behavior” from the former CIA boss. (Trump told the Journal he was prepared to announce his decision on Brennan during his vacation last week, but that it was too “hectic.”)

The president also accused Brennan of lying about intelligence community conclusions about the 2016 election and purported surveillance of congressional staffers.

Brennan swiftly condemned Trump’s decision, saying the president was “trying to get back at me” for intense criticism.

“I think Mr. Trump is getting more and more concerned, more and more desperate and I would say more and more frightened, as there is closer and closer magnification of some of the things that those around him have been involved in,” Brennan told MSNBC on Wednesday afternoon. “So I do think it’s important that I continue to speak out.”

He continued his onslaught against Trump on Thursday with an op-ed in The New York Times. “Mr. Trump’s claims of no collusion are, in a word, hogwash,” he wrote.

Brennan, who served as President Barack Obama’s CIA director from 2013 to 2017, is one of the highest-profile and most caustic critics of Trump. He was one of the national security officials who briefed Trump on Russia’s attacks on the 2016 election before his inauguration in January 2017. The officials showed Trump highly classified evidence that Russian President Vladimir Putin had personally ordered the cyber warfare, the Times reported.”

We have not heard the last of this at least not from John Brennan.