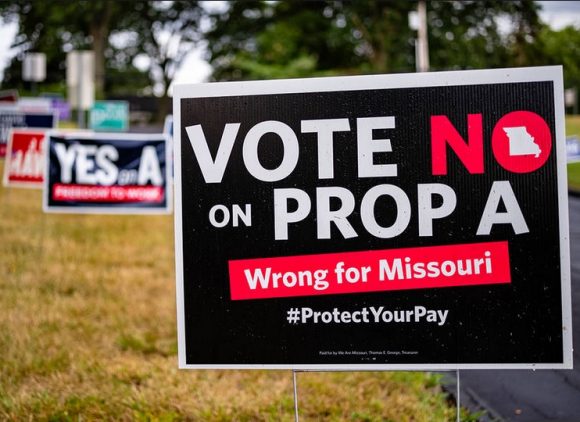 While much of the media was focused on special elections in states like Ohio on Tuesday, voters in Missouri by a 2-to-1 margin, delivered a major victory for unions by defeating a right-to-work law.  The measure on the ballot asked voters to pass judgment on a prospective law barring private-sector unions from collecting mandatory fees from workers who choose not to become members.  A New York Times editorial commented on this victory as follows.

“In recent decades, conservative activists and lawmakers have turned labor unions into convenient punching bags. In Missouri on Tuesday, however, unions seemed to figure out at least one way to punch back: Voters there resoundingly defeated an anti-union law via ballot proposal.

There’s always a danger in over-interpreting the results of a single election, but the two-to-one margin by which Missouri voters overturned the so-called right-to-work law appears to be the latest sign of resurgent and effective labor activism. The vote comes months after teacher strikes around the country forced Republican-controlled legislatures in states like West Virginia and Oklahoma to hand out big raises to overworked and underpaid workers for the first time in many years.

The Missouri law, which passed in early 2017 but never went into effect, was designed to weaken private-sector unions. It would have allowed workers to claim the benefits of union-negotiated contracts and representation in disputes with management without having to pay dues and fees to cover the cost of those benefits.

Missouri is hardly a bastion of liberalism — President Trump won it by nearly 20 points in 2016. But voters there, as in much of the country, seem to be waking up to the concerted, years-long conservative campaigns to exacerbate income inequality and impoverish working-class families. The A.F.L.-C.I.O. noted that Tuesday was the first time a right-to-work law had been overturned through a ballot measure. With that success, expect unions to use this tactic again in the near future.

Right-to-work laws, which are now in place in 27 states, have been branded as such because Republicans have successfully framed this issue as one of giving workers the right to not belong to a union. Backers of these laws also argue that they help states attract businesses and create jobs. In practice, the measures undercut labor power and have done little to create good-paying jobs. They have contributed to the steady, decades-long decline in union membership — less than 11 percent of workers were union members in 2017, down from about a third of workers in 1945. That decline has played a big part in depressing wages, even in industries and companies that had never had a significant union presence. That’s because union contracts often serve as a benchmark for pay and working conditions. A 2015 analysis by the Economic Policy Institute found that annual wages in right-to-work states were about 3 percent, or nearly $1,600, lower than in states that didn’t have such laws.

The attack on unions has been broad-based, with even activist conservative judges getting into the act. This summer, by a 5-to-4 vote, the Supreme Court overturned a unanimous 40-year-old ruling when it decided that states could not require government employees to pay fees that covered the cost of collective bargaining.

The immediate impact of the union victory in Missouri will be limited. Only 8.7 percent of workers in the state are union members, and the vote will merely preserve the legal status quo. It may also be hard for unions to replicate the conditions under which they won — labor groups spent about three times as much on campaigning against the right-to-work law as proponents of the law spent defending it. The labor activists also benefited from the law’s being closely associated with the state’s disgraced former Republican governor, Eric Greitens, who resigned in May amid scandal. Conservative groups will surely regroup and put up more of a fight in the future, and labor will still face an uphill fight in federal courts that Mr. Trump and the Senate majority leader, Mitch McConnell, are busily packing with far-right, anti-labor ideologues.

Still, Tuesday’s vote and the popular support for teacher strikes in red states show that unions have the wind at their backs for the first time in a long while. That is welcome news for long-suffering American workers.”