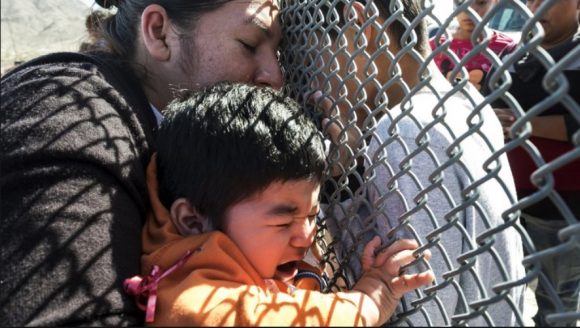 The New York Times is reporting today that the Trump administration had separated 1,995 children from parents facing criminal prosecution for unlawfully crossing the border over a six-week period that ended last month.  On Thursday, Attorney General Jeff Sessions claimed that the Bible justifies his “zero-tolerance” immigration policy.

“Concerns raised by our church friends about separating families” are not “not fair or logical,” he said in a speech in Fort Wayne, Indiana. “I would cite you to the Apostle Paul and his clear and wise command in Romans 13 to obey the laws of the government because God has ordained them for the purpose of order.”  White House press secretary Sarah Huckabee Sanders backed up Sessions’ claims later that day, calling it “very biblical to enforce the law.”  However, Christian leaders are pushing back against Sessions and Sanders for their reliance on the bible for their treatment of immigrant families.  Here are several comments compiled by the Huffington Post.

“While protecting our borders is important, we can and must do better as a government, and as a society, to find other ways to ensure that safety,” Cardinal Daniel Nicholas DiNardo, president of the U.S. Conference of Catholic Bishops, said in a statement. ”Separating babies from their mothers is not the answer and is immoral.”

“Disgraceful,” the Rev. Franklin Graham, son of the late and influential Rev. Billy Graham and a supporter of President Donald Trump, said in a Tuesday interview. “It’s terrible to see families ripped apart, and I don’t support that one bit.”

“Tearing children away from parents who have made a dangerous journey to provide a safe and sufficient life for them is unnecessarily cruel and detrimental to the well-being of parents and children,” reads a statement signed by Bishop Kenneth Carter, president of the Council of Bishops of the United Methodist Church.

“It makes my blood boil,” said Matthew Schlimm, a professor of the Old Testament at the University of Dubuque Theological Seminary in Iowa. “Sessions has taken the passage from Romans 13 completely out of context. Immediately beforehand and afterwards, Paul urges readers to love others, including their enemies. Anyone with half an ounce of moral conviction knows that tearing children away from parents has nothing to do with love.”

Schlimm noted that people often misuse the Bible. In fact, the same passage Sessions cited has been used to justify slavery and Nazism.

Ian Henderson, an associate professor of New Testament studies at McGill University in Montreal, said that no matter how people want to read into Romans 13, it does not mean that Christian citizens should not protest against bad laws or bad government.

“It is perfectly reasonable, indeed a duty and part of ‘submission,’ for Christian citizens to express their ‘concerns’ about whether the law and/or its administration are ethically defensible or politically useful,” he said. “For conservative Christians, this would especially be so when the law of the State seems to be attacking the biblical authority of the family.”

Father James Martin, a Jesuit priest and the editor-at-large of the Jesuit magazine America, said Sessions’ actions are in fact the opposite of the Bible’s teachings about caring for the poor and being compassionate.

“I cannot imagine anyone in his or her right mind thinking Jesus would approve of ripping children from their parents,” Martin said in a Friday interview on MSNBC. “It goes against pretty much the entire Bible in the ethos of Jesus, and it’s deeply un-Christian.”

Glad to see members of the Christian hierarchy come out so clearly against Sessions.

And Mr. Sessions and Ms. Sanders, let’s not forget to “Love thy neighbor as thyself!”