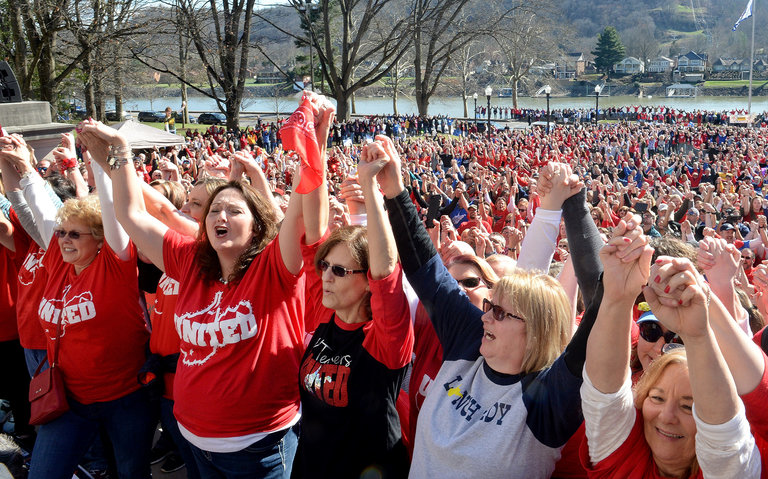 I hope all of you who live and work up and down the East Coast weathered yesterday’s storm well.  Here in New York, many homes are without power and/or cable service.

Last week, I blogged about the teachers strike in West Virginia which wil be continuing next week. The New York Times has an editorial this morning entitled, West Virginia Teachers Give a Lesson in Union Power, which congratulates the teachers and suggests that members of the US Supreme Court listen to them as they get ready to rule on Janus v. American Federation of State, County, and Municipal Employees, Council 31, which is if it goes the way many expect, will curtail the ability of public unions to receive union dues from those who do not wish to join. The editorial specifically calls on Justice Samuel Alito:

“He [Alito] would learn something about workers’ dignity if he spoke with Katie Endicott, a 31-year-old high school English teacher from Gilbert, W.Va., whose take-home pay is less than $650 a week. She’s one of thousands of teachers who have been on strike for more than a week, shutting schools in all 55 counties of the state.”

Read the editorial below.  It makes its point well!

West Virginia Teachers Give a Lesson in Union Power

Before he puts his name to a Supreme Court opinion that is expected to eviscerate public-sector unions, Justice Samuel Alito Jr. should visit West Virginia.

In considering issues in a case argued this week, Mr. Alito has said the fees that unions charge nonmembers for the expense of collective bargaining infringe on workers’ “dignity and conscience” by forcing them to fund a union whose political positions they might disagree with.

He would learn something about workers’ dignity if he spoke with Katie Endicott, a 31-year-old high school English teacher from Gilbert, W.Va., whose take-home pay is less than $650 a week. She’s one of thousands of teachers who have been on strike for more than a week, shutting schools in all 55 counties of the state.

The state wanted to give 1 percent annual raises for five years to the teachers — who make less than those in all but three states — and have them pay more for health insurance.

“I have two children; I live paycheck to paycheck,” Ms. Endicott told The Times. “When I realized that they were taking hundreds of dollars and then they tried to tell me they were giving me a pay raise of 1 percent, I knew I can’t just sit back.”

First she joined hundreds of teachers who flooded the state Capitol on Feb. 2 as legislators considered legislation with the 1 percent raise. It passed the Senate 33-0.

“We were just walking silently from the Capitol,” Ms. Endicott related, “and one teacher said, ‘Guys, we’re really going to have to strike.’ At that point, I knew.”

Union battles have a deeper role in the history of West Virginia than that of perhaps any other state. Coal miners there fought bloody battles with mine owners who cared little for the sacrifice of life and limb that workers made to haul their coal from the earth. But unions have been broken there as they have throughout the country. Fewer than 5 percent of miners are represented by unions, according to the Bureau of Labor Statistics.

Public-sector unions have been the last bastion of worker strength.

Despite Justice Alito’s hand-wringing over the right to free speech, the effect of the decision that is expected from the court would be to silence workers and sap their power. The West Virginia teachers are having none of that. While it looked as if the strike was settled this week when the governor agreed to 5 percent raises, the Legislature had not committed to that, and how much workers would pay for health care was still unsettled. So the teachers stayed out.

“We come from an area that is known for standing up for what they believe in.” Ms. Endicott said. “The union wars, they originated in the south in Mingo County. We believe we’re following in their footsteps.”

And, we can hope, these teachers can provide workers throughout the country with a powerful lesson.